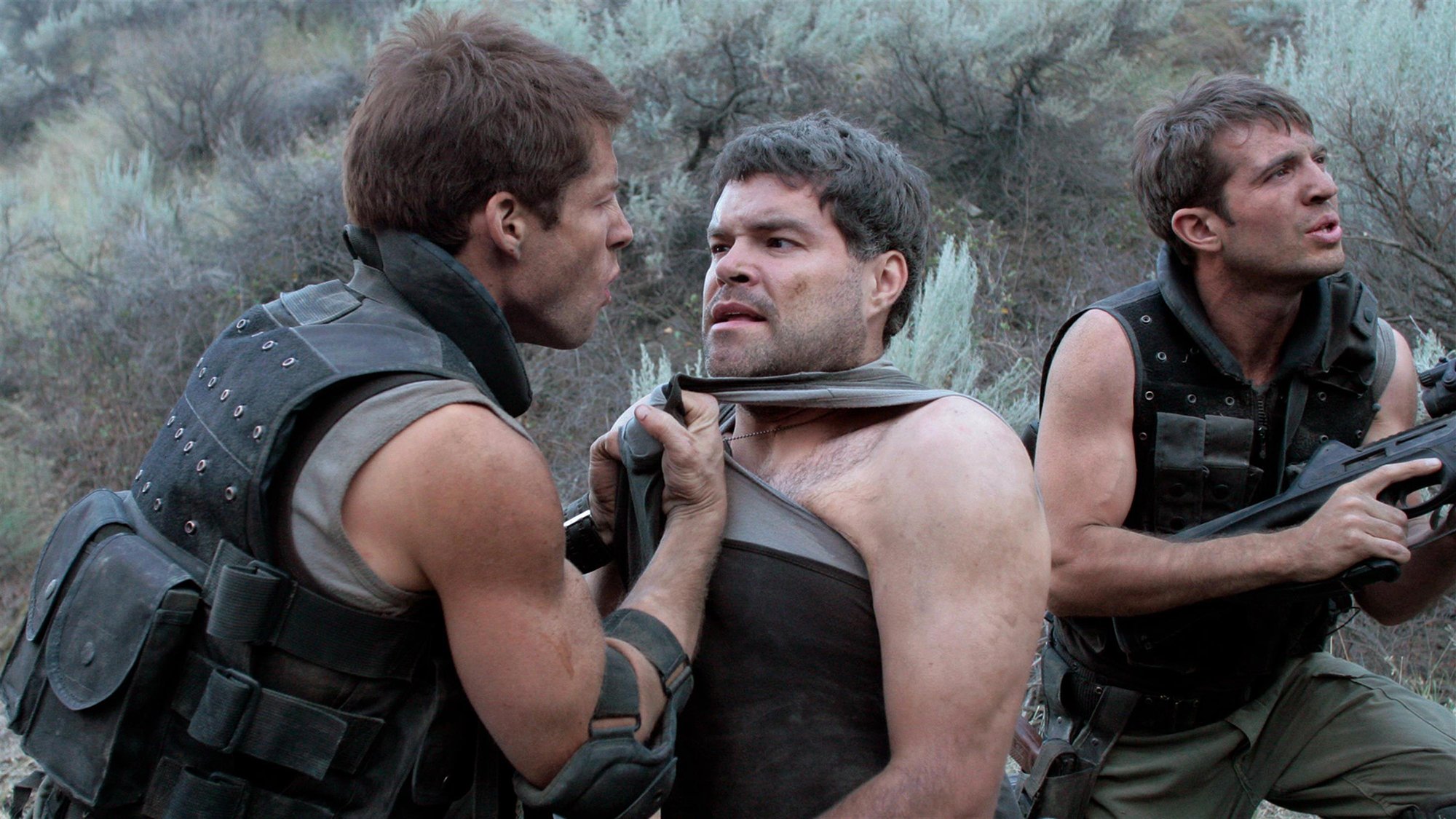 Midway through its third season winter premiere, the Battlestar Galactica episode “Rapture” reached all the way back to the pilot miniseries to reveal just how much a character who shouldn’t be able to grow had grown.

Caprica Six (Tricia Helfer), the Cylon who snapped a baby’s neck of a baby in the miniseries’s opening minutes, was involved in a tense standoff with Boomer (Grace Park) and Sharon (also Grace Park) over the life of Sharon’s child, the human-Cylon hybrid Hera. The child, quite ill, wouldn’t stop crying and needed the care of a human doctor, something the other Cylons weren’t sure they were going to let Sharon seek out (some of the misdirected anger at the child made it seem as if the Cylons, as a race, were suffering from post-partum depression). Boomer put her hand around the child’s throat, threatening to snap her neck. Six’s next move was quick and decisive—she knocked Boomer out, then snapped Boomer’s neck. This reversal of that moment from the miniseries highlighted just how far Six—ostensibly an unchangeable, programmed robot—and all of the other characters had evolved during the course of a miniseries and two-and-a-half full seasons.

“Rapture” itself was kind of frantic, cross-cutting endlessly between political intrigue on the Galactica, a dire rescue mission on a planet’s surface, betrayal on the Cylon basestar, pseudo-mysticism in a long-hidden temple, a small group of soldiers trying to hold off a superior force, and a few bits of family and relationship drama. And then a star went nova. The hour might have felt too dense if the third season of the show hadn’t been, thus far, rather miserly in its willingness to advance the overarching plot. The thickly plotted “Rapture” and its equally substantial predecessor, the midseason-ender “The Eye of Jupiter,” went a long way toward rectifying that.

One thing that is coming sharply into focus as the third season rolls on is the show’s increasing focus on loyalty. Galactica started out as a rather simple “us vs. them” tale (with a bit of the apocalypse rolled in for good measure), but as the series has gone alone, it has resolutely blurred the lines between “us” and “them.” Now the show’s roster of fully developed characters includes deeply flawed humans, deeply flawed Cylons and one or two members of each race who don’t know where their true place is. In “Rapture,” every major character was forced to ask where, exactly, his or her loyalties lie, based on personal experience; the series’s willingness to take its time exploring that experience partly explains the impact of the last two episodes. The last couple of seasons have aired some draggy hours, to be sure; but Six’s quiet reversal described above—and for that matter, the moment when Sharon goes back into the Cylon basestar and returns with her child but without betraying her new loyalties to her human commanders and husband—would not have been possible if the series hadn’t insisted on a somewhat leisurely approach toward teasing out its characters.

The Sharon and Helo (Tahmoh Penikett) storyline was responsible for at least two great shots in the episode, both of which flashed by quickly and engaged the episode’s themes of loyalty. Early in the episode, Sharon, seeking a way aboard the Cylon ship, asks her husband to shoot her so she might die and be downloaded on board the ship. He’s uncertain he wants to do it—unsure of his capacity to pull the trigger, and perhaps also unsure of her loyalties to him and his race. In the end, though, he does it, and we see the act in longshot—Helo embracing Sharon, the gun flash spattering her blood against the wall behind her, their whole tortured relationship summed up in a ghastly instant. Later, Helo is confronted by Admiral Adama (Edward James Olmos) and President Laura Roslin (Mary McDonnell) and forced to defend his action. Helo is angry at Roslin for keeping Hera’s survival from him. He turns on the president, looming large over the rather diminutive chief executive (who nevertheless holds her own); but then we see, in a shot framed by the doorway leading to the room the three are standing in, that a simple grip from Adama’s hand prevents Helo from touching Roslin. Helo may not respect his president, but his commanding officer is another story.

The season’s most ambitious gambit is its attempt to get the viewers to shift their loyalties, ever so briefly, to the side of the Cylons—or to at least try to understand the nature of the enemy. (The New Caprica arcs, which placed the main characters in the role of insurgents, had a similar impetus.) Throughout its run, Galactica has used the Cylons to examine certain aspects of fundamentalist religion, and “Rapture” dug into these questions again. The attempts by D’Anna (Lucy Lawless) to work with Baltar (James Callis) and uncover the nature of the five Cylon models no one knows about have irked the other Cylons, who aren’t big on self-examination. After D’Anna is granted a brief audience with the final five (she seems to know one of them, though we aren’t allowed to see who it is), she’s taken aside by Cavil (Dean Stockwell) and informed that she and all others of her model are being placed in storage—decomissioned because of their dangerously unorthodox ideas. The episode’s final shot recalls the giant warehouse at the end of Raiders of the Lost Ark—showing a giant storeroom (of sorts) holding dozens upon dozens of models identical to D’Anna, all deactivated and lying in resurrection pods. The comparison of the Cylon hive-mind to the hive-mind of fundamentalist religion hasn’t always worked so well; but its deployment here—to show how those who question and prod at faith are cleanly cut out of the fundamentalist body—was well-done. All evidence to the contrary, here’s hoping Lawless, who gave a career-best performance in this episode, will turn up again sometime.

And all of the above doesn’t begin to touch on the multitudes of other things that happened in the episode, including some advancement on the love triangle front (Starbuck and Dee, who are in love with the same man, bonded as Dee rescued the injured and downed Starbuck) and some nicely staged shootout scenes between pinned- down humans and ever-increasing numbers of Cylons. And that’s to say nothing of both Baltar and Six ending up in the custody of the humans by episode’s end. Add to that a significant revelation about Starbuck (the paintings in her apartment, glimpsed in season two, seemed to foretell the significance of the star going nova—does this mean she’s a Cylon? That seems likely, though also too obvious for this series). This was a dangerously overstuffed episode, and a lot of elements got short shrift (the really impressive nova special effects were burned off in a rescue sequence that sped by in under 30 seconds). But “Rapture” was Galactica at its plot-heavy best, tossing its many characters together into various pairings to see where they might land.

This marks the first BSG review on a Monday, due to the show’s move to Sundays at 10 p.m. EST/PST. The series suffered declining ratings on Fridays when it went up against the fall premieres on the major broadcast networks; a fourth season may be contingent on the series getting more eyeballs on its new night.