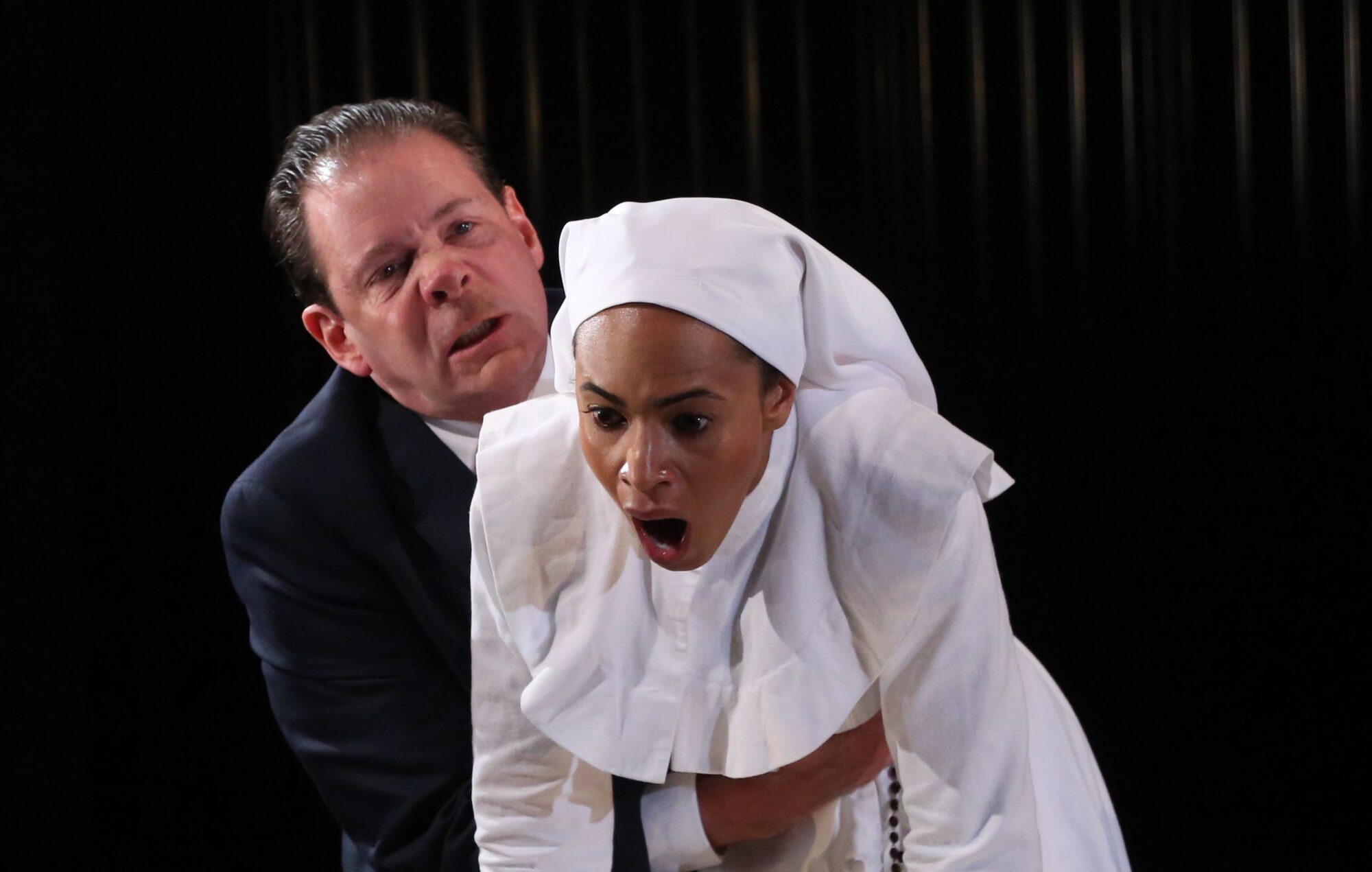 Photo: Theatre for a New Audience

As the crowd waited in the lobby of the Polonsky Shakespeare Center for the curtain to rise on Simon Godwin’s production of Measure for Measure, a voice on the loudspeaker said that the bordello was now open. This isn’t the way Shakespeare productions typically begin, even in Brooklyn. Theatre for a New Audience built a passage from the lobby to the theater, with simulated acts of sadomasochism in the occasional opening on either side, separated by a hallway lined with rows of sex toys on small shelves, more boutique retail than museum. Guests were greeted at the entrance by a bored woman with a thick Slavic accent. “Nice to see you again,” she muttered to my wife.

All this was to emphasize and reemphasize the decadence of the play’s Vienna, clearly Godwin’s chief concern. Against a wine-red wall, the stage at the start was decorated with champagne-colored balloons, candelabras, and trays of sparkling wine, with a rock combo—drums, electric guitar, accordion—off to the side, behind a plexiglass partition. The raunchy, bluesy music they played, combined with the production’s boozy, semi-immersive feel (those in the first row sat at the stage like it was a table), suggested the influence of Natasha, Pierre & the Great Comet of 1812, just recast for Austria rather than Russia. The play’s Duke, Vincentio (Jonathan Cake), stumbles on stage, shoots himself up with (presumably) heroin, gets tangled in a sheet, and passes out, before then waking up in the morning—and thus begins the action of the play.

Wait, why is the duke on drugs? Because this production, ostentatious in its salacity, is part of that modern European tradition that mistakes provocation for insight. When the pimp Pompey (Christopher Michael McFarland) asks the brothel manager, Mistress Overdone (January Lavoy), “You have not heard the proclamation, have you?,” referencing the ban on houses of prostitution that sets the plot in motion, he does so while packing up a blowup doll and rolling up a string of brightly colored condom packages that’s impossibly long, like a clown scarf. In act four, we again see Pompey, this time on a toilet taking a shit. When such noisy stage business quieted, the production was powerful; it just needed to give its strong cast the space to act in peace.

Best among the actors was Cake, as Vincentio, the duke who for some reason pretends to leave Vienna but sticks around to observe and manipulate what transpires in his absence (and wean himself off heroin?), hiding here in plain sight by donning a hood or thick Clark Kent glasses. Cake, the memorable Benedick in Theatre for a New Audience’s 2013 Much Ado About Nothing, delivers his iambic pentameter with unpredictable rhythm and pitch, like a soloing bebop saxophone, yet his diction is impeccable. He seems to improvise breathlessly though he remains tightly in control, yielding a riveting and lively performance that easily jumped between the deadpan and heartfelt. (Scholars count Measure for Measure among Shakespeare’s “problem plays,” those whose seriousness butts heads with their comedy.)

Haynes Thigpen, as Lucio, a debauched nobleman, also carefully and cleverly straddled that line between comedy and poignancy. Costume designer Paul Willis dressed him as a dirtbag hipster Joker, in a purple suit over a yellow tee, a green fedora over his unkempt hair. Thigpen made Shakespeare’s poetry sound self-consciously verbose or intentionally douchey without somehow also demeaning it; he just made it sound freshly funny, employing contemporary inflections like “Haaaail, virgin!” Similarly, McFarland seemed to speak with a non-rhotic, back-vowel chain shift, drenching Shakespeare’s King’s English in the dry wit of Ole New Yawk.

Merritt Janson, as Mariana, the rudely spurned fiancée of the hypocritically righteous governor Angelo, also provided some New York flavor: She begins act four, after the intermission, as a singer in a rock club called The Moated Grange. (The setting in Shakespeare’s text is, literally, a moated grange.) Janson sings Shakespeare’s song “Seals of Love,” arranged here as a soft and sincere folk-rock ballad, as some of the audience sat around her at two-top tables; it was touching, as were the displays of forgiveness and dedication in her eyes, even though they were directed to the vile Angelo. Cara Ricketts, as the nun-to-be Isabella, was more straightforwardly dramatic, projecting devastated fury at the fake news of her brother Claudio’s execution for fornication; ferocity, in her distress at being asked to give her body to Angelo; and tender generosity in her rectitude, during happier moments.

Angelo, as played by Thomas Jay Ryan, bore conspicuous resemblance to Richard Nixon, sharply suited, hunched in posture, hair slicked back. (His awkwardly bent arms and fingers, though, more strongly evoked Mr. Burns.) For many in the Fort Greene audience, it was surely a short cognitive jump from Nixon to his political stepchild, Donald Trump, in alignment with the dramaturg Jonathan Kalb’s “Perspectives” note in the program, which pointed out that the play features “a head of state who has sexually harassed” a woman who, when confronting him in public, is “publicly vilified as irrational and treacherous,” among other contemporary parallels. (Zachary Fine, scene-stealingly boisterous as the constable Elbow, wore a Curtis Sliwa cap.)

By not having put an orange-tabby wig and too-long tie on Angelo, Godwin avoided for Theatre for a New Audience the protesters who boneheadedly picketed the Public Theatre’s Central Park performances of Julius Caesar—which is probably smart. As the Playbill notes, “This production is supported in part by an award from the National Endowment for the Arts,” which Trump dreams of bankrupting. No need to poke that bear, at least just now.

Measure for Measure runs until July 16 at the Theatre for a New Audience.

Interview: Martin Sherman on Gently Down the Stream, Gay History, and More