One of the season’s biggest theatrical spectacles is not on Broadway. Sleep No More marks the New York City debut of Punchdrunk, a British company known for its immersive theater productions. Filling up a six-floor Chelsea warehouse space with their heady concoction of scenic design and wordless performance, they’ve managed to turn Macbeth inside out. “The Scottish play” is certainly having a New York moment: two Off-Broadway productions, Throne of Blood at Film Forum this weekend. Punchdrunk’s loose adaptation ups the ante, making the audience uniquely complicit in this tale of madness, upheaval, and revenge.

While “interactive” performances like Fuerza Bruta take their inspiration from the club scene, Punchdrunk has adopted the atmosphere of a haunted house—or in this case, a hotel. They’ve replaced cheap scares with the genuine ghastliness of the source material, Shakespeare’s most macabre play. Sleep No More’s primary setting is the McKittrick Hotel. With its noirish early-1930s trappings, this hotel functions as a time warp as well.

As “guests” of the McKittrick, audience members enter the Manderley Bar, complete with a sultry jazz band, in staggered shifts. Divided into even smaller groups, guests are given Venetian style masks and taken deeper into the hotel by an elevator operator who lays down the simple ground rules: keep your mask on (“to maintain your anonymity”), remain quiet, and follow whatever interests you.

If you find the setup intriguing, be advised that the experience is more transporting if you know very little going in. (Spoilers follow.) If words like “immersive” and “participatory” give you performance anxiety, rest assured that your mask allows you a fly-on-the-wall vantage point. In Sleep No More, participation essentially means going wherever you choose. Some theatergoers may feel unmoored at first, but the freedom quickly becomes intoxicating.

The mazelike series of fully dressed rooms (over 100 of them) are crammed with fascinating details that reward curiosity. Open any door and drawer that intrigues you (one closet reveals a secret passage). The evocative environments (a taxidermy shop, a graveyard, a nursery, a grand ballroom, a psychiatric ward) unexpectedly become 360-degree sets for the performers who constantly rush about. You may find that the hotel registry you just leafed through suddenly becomes a prop for a very pregnant Lady Macduff (delicately performed by Alli Ross on the night I attended) who enters the musty lobby, eager to check in. When she’s given a glass of milk by a woman resembling Mrs. Danvers from Rebecca, you might have a Suspicion that she’s the victim of a sinister plot (Hitchcock references abound!). Moments later, the front desk itself becomes a stage for the nimble performers who employ dance and movement in lieu of Shakespeare’s text to advance the story.

The wordless scenes manage to cast a spell that wouldn’t be sustainable with conventional dialogue. Without narrative signifiers, scenes can be hard to contextualize, though it doesn’t take long discern that the couple entangled in a raw and dangerous bedroom dance are Macbeth and Lady Macbeth (fiercely embodied by Eric Jackson Bradley and Tori Sparks for the reviewed performance). It’s not hard to guess that the water in the tub at the center of the room will be blood red before long.

The players move about with electrifying intensity, effortlessly becoming center stage even when standing in near-darkness. Darting through rooms like ghosts, they seem to look right through the masked attendees. In the unexpected instances where they take someone by the hand, or fix their gaze on you, the effect is unnerving.

To get a sense of the scale of this production, imagine the New Museum allowing an accomplished group of installation artists to transform every floor. Then imagine that an accomplished dance troupe has tailored a massive performance piece for the entire building. Impressively, Punchdrunk merges these radically different disciplines into one company. It must be some kind of left brain/right brain harmony that allows co-directors Felix Barrett and Maxine Doyle to execute their logistically mind-boggling concept with such virtuosity.

What’s most challenging about Punchdrunk’s presentation is that you won’t see the same scenes and events as the rest of the attendees because the action is playing out in different rooms and floors simultaneously. This sometimes results in the frustrating feeling—as you enter a room and see fellow attendees dispersing—that you’ve missed a key moment. Some attendees choose to stalk the actors like cats underfoot. (I quickly found that trying to keep up with Macbeth proved exhausting). Let me attest though: Astounding moments occur wherever you wander. You might miss out on seeing Banquo’s fatal encounter with Macbeth in seedy pool room. Instead, you could have the voyeuristic privilege of seeing Lady Macbeth literally climbing the walls, waiting for her husband’s return. In this unpredictable terrain, the witches (here named after 17th-century Scottish witches) are no longer confined to a few scenes. They are seductive and ever-present manipulators, watching the tragedy unfold, much like you and the other masked guests.

With multiple scenes happening simultaneously (and occasionally repeating), Sleep No More turns the concept of “off-stage action” on its head. Your journey might skirt the edge of the main story, providing glimpses of how Macbeth’s actions cause ripple effects for the peripheral characters. Even the decor of the rooms suggests miniature dramas: the inside of a large bible has been partly hollowed out, cryptically concealing a timepiece; a darkroom is strung with strange bird photographs; suspended headless dolls loom over a baby’s crib.

Ultimately, Punchdrunk is less concerned about delivering the plot, opting instead to stir your five senses with Macbeth’s nightmarish suspense by employing the tropes of mood masters like Hitchcock, Kubrick, and Lynch. By the evening’s end, you may not be able to I.D. all the characters in relation to the source material, but you’ll remember their haunted faces. And if you don’t make a return trip to see what you missed, you’ll likely revisit the halls of the McKittrick in your dreams.

For more information about Sleep No More, click here.

Review: The Speed Is the Rub at Classic Stage Company’s Macbeth 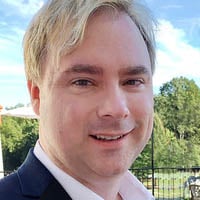 Carl Kelsch is the Managing Editor of Harper’s Bazaar. He’s also a screenwriter whose short films of varying quaility can be found smattered among the interwebs.

Lost and Found in Translation: Playwright Rajiv Joseph on Bengal Tiger at the Baghdad Zoo

Stiven Luka’s The Little Chaos Is a Charming Brechtian Mashup