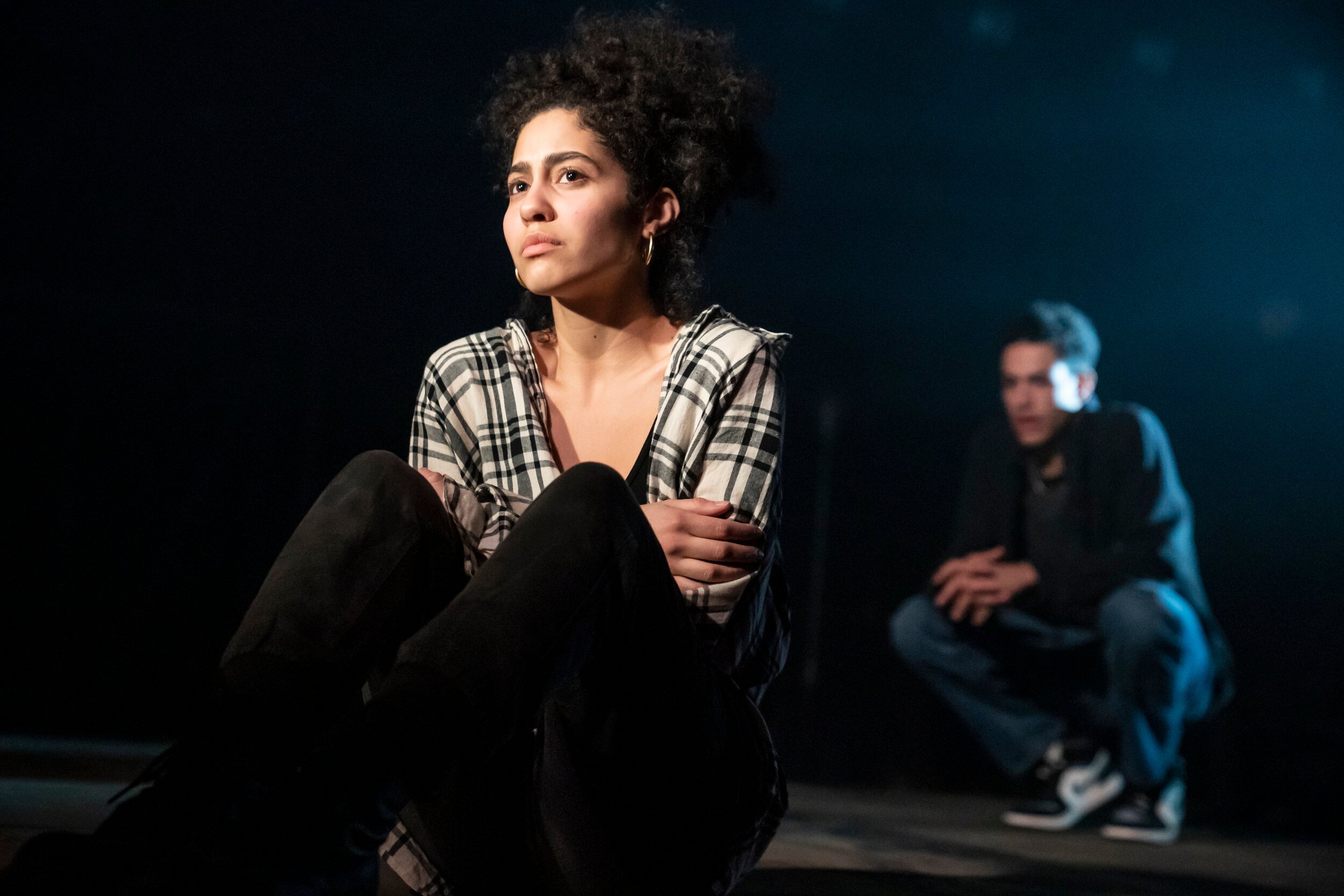 Snatches of conversations and fragments of intercut memories form the patchwork quilt of Martyna Majok’s Sanctuary City, the New York Theatre Workshop world premiere that began its ill-fated previews in the first week of March 2020 but has been, thankfully, resurrected. Two high school classmates, childhood immigrants known to the audience only as B (Jasai Chase-Owens) and G (Sharlene Cruz), live out their friendship in cycles. Night after night, G shows up at B’s window, fleeing her mother’s violent boyfriend, and B lets G stay over. Day after day, B anticipates the moment when his undocumented mother will carry out her plan to return to their home country, leaving him behind.

On a bare, prop-free platform, B and G swivel through scenes—some lasting only seconds, few lasting more than a minute or two—that chart, through a time-hopping chronology, the evolution of a friendship. The location and the historical moment are spelled out—when the play begins, B and G live in Newark, months after the 9/11 attacks—but Sanctuary City spins its finest gold out of the imprecision generated by the juxtapositions that Majok creates, switching back and forth between uproariously awkward prom dances and tense, taut confrontations, as if flipping through the disparate channels of B and G’s shared past.

Director Rebecca Frecknall navigates these breathless transitions with remarkable clarity and inventiveness. Despite the blank-canvas playing space, Cruz and Chase-Owens, honest and tender and brutally funny, create a sharp sense of place just by moving together through the empty air, conjuring the contours of the bedroom and fire escape they sometimes share. Through the actors’ movement and Isabella Byrd’s canny lighting alone, the stage sometimes feel like a turntable as the same recurring moments are staged from rotating perspectives.

Though both friends imagine entering young adulthood undocumented, a sudden change for one of them propels the pair on divergent paths. By detaching B and G from the physical world around them, from chronology, from anything except each other, the play contrasts the arbitrary bureaucracy of American citizenship with the essential humanness of two teens who are in love, if not with each other, with the experience of feeling fully seen by someone else.

If the play’s first half shows America as distilled dystopia, that focus only sharpens after an ambitious structural shift. Sanctuary City’s lengthy final scene works much like the real world—from the actual props to the uninterrupted passage of time—and the free-wheeling optimism hovering over the play’s early stretches gives way to the impossibilities of living a full life on the margins. Majok forces her characters to grow up before our eyes, to wrestle with the weight of sacrifices (like a high-risk marriage plot that will both gain B his freedom and cost G hers) that won’t just affect their adolescence but will shape the rest of their lives.

Sanctuary City is riveting, until it isn’t. It’s only in the final 20 minutes or so that the arguments among a surprise pseudo-love triangle—B and G are joined, late in the play, by an unexpected third character—start to become frustratingly circular. In trying to contrast the transcendent efficiency of her unlikely initial storytelling mode with the ungainliness of everyday conversation, like a Shakespearean pivot from blank verse to prose, Majok comes a bit too close to flattening her characters as she deliberately prolongs their altercations.

In Sanctuary City’s first half, though, Majok’s deliberate, crafty use of repetition never threatens to go stale. During this stretch of the play, she meticulously exposes the way that relationships contract and expand over the years through ritualized behavior and language and gesture. As her two main characters grow around each other like ivy, the poetry of patterned connection emerges most profoundly through memory’s own twisted vines.