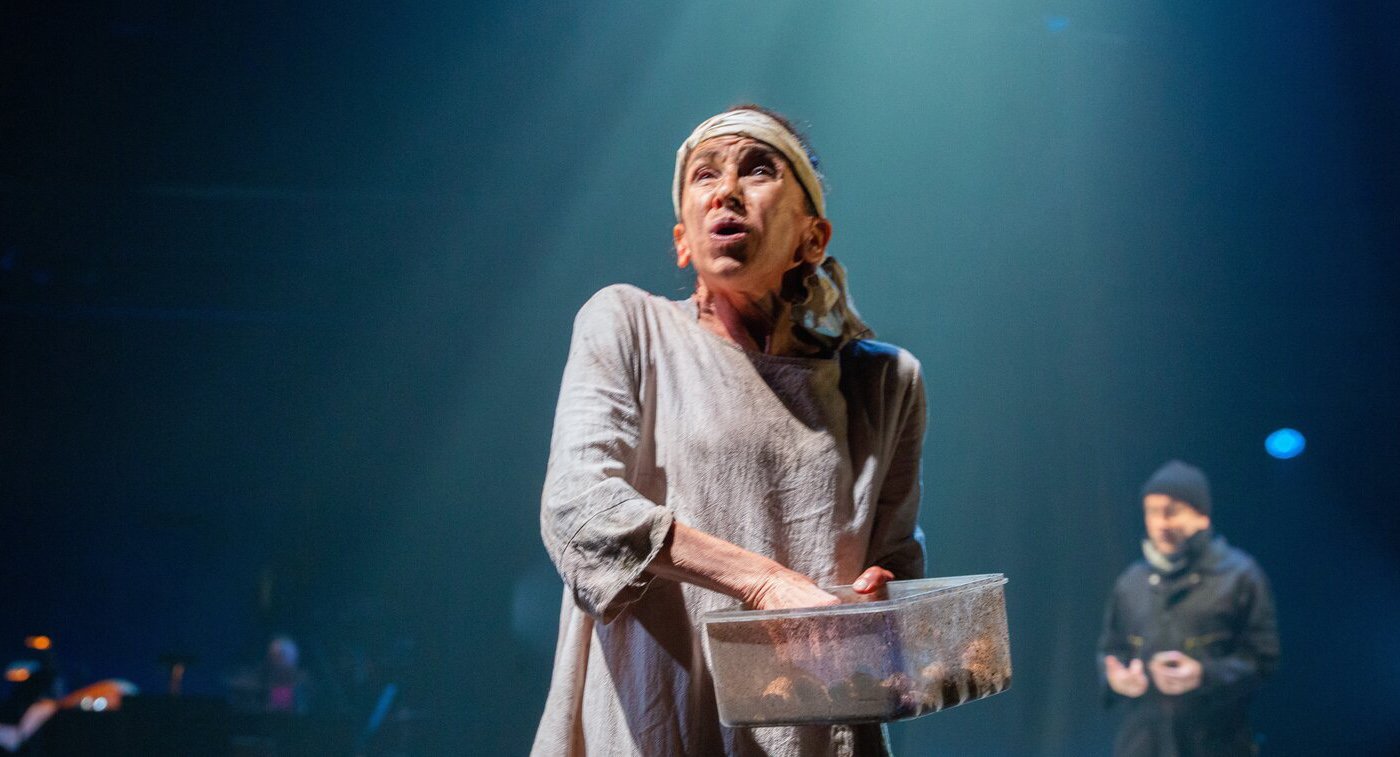 As Timon, re-gendered as female for Simon Godwin’s Timon of Athens, the diminutive Kathryn Hunter is all sharp elbows and shoulders. Throughout, she enriches her expert handling of Shakespeare’s language with extraordinary physical expressiveness. When she dances on a banquet table, beaming in a golden gown, you’ll be rapt. And you may never forget the moment where, scowling and given over to hatred, her Timon drags a dining chair as big as her onto the stage, her snow-white garment doused in blood.

Timon, a rich Athenian, lavishes gifts on her friends until she goes into terrible debt. No one helps her, so she turns her back on humanity, taking to the woods to live as a misanthrope. In an unsubtle reversal, her golden world of opulence and excess gives way to a barren anti-Arden where she will die alone in a cave, cursing mankind. In Timon’s prime, Hunter throws her long, slender arms wide in absolute welcome and seems always on the verge of an embrace; later, in the forest scenes, those same arms seem wretched: They have to dig, scratch, and fight, turning all her elegant gestures into disturbing movements worthy of Andy Serkis’s Gollum.

Another highlight of the show, now playing at the Polonsky Shakespeare Center, is the production design (the sets and costumes are both by Soutra Gilmour). The early scenes take place in a great banquet hall, chandeliered and blazing golden light. Before the performance begins, the audience is treated to a lively mini-concert while Timon’s household staff brings around trays of hors d’oeuvres, fun little perks that charm us, drawing us into her largesse. Timon and her guests dress all in black and gold, in outfits ranging from the glamorous to the absurdly gaudy. The rad, ridiculous feathered shrugs worn by Sempronius (Daniel Pearce), for example, perfectly capture the decadence of the group that hangs around Timon’s house.

The play’s forest scenes, where a column of black stage curtain makes up the trunk of a great, dark tree, leave that golden world behind. From the rafters, an immense, menacing bough hangs on chains, its bare branches extending toward the audience like a terrible, misshapen hand. And in the front of the stage is a pit, like a grave, for Timon, now dressed in filthy rags, to dig, fight, and rail against the world in. Rarely has it felt so exciting to first enter a theater space, and rarely so foreboding to return after intermission.

Timon of Athens can be a slog, so Godwin is to be commended for a streamlined production that’s consistently engaging. Repetitive scenes that are separate in the text of the play are braided together, yet kept distinct by clever lighting effects and the way the actors simulate slow motion and being frozen. But there’s a tradeoff here, as these effects, while clever, can also be corny. More importantly, the production cuts an early scene where Alcibiades (Elia Monte-Brown) pleads unsuccessfully for the life of a comrade who’s been sentenced to death. For her persistence in the matter, she’s banished from Athens. While it’s admirable that the production casts female actors as both Timon and Alcibiades, particularly since this is the play with the fewest lines spoken by female roles in all of Shakespeare, the streamlined nature of the production has the unfortunate effect of flattening out Alcibiades’s character and underutilizing Monte-Brown, who brings a fresh and angry fervor to the role.

Timon of Athens has been called Shakespeare’s strangest play. Believed to have been written in collaboration with Thomas Middleton, a contemporary with a darker, more cynical sensibility, it has a nastier tone than you might expect, and, while in many ways a tragedy, it withholds, in the end, the relief of tragic catharsis. Certain Shakespearean hallmarks, such as an emphasis on family relationships, are absent as well. The play’s design is conspicuously schematic, and the rough state of the text has led some scholars to believe that it’s unfinished.

The paradox of Timon of Athens, however, is that the strangest Shakespeare play, which seems so unlike him, somehow also seems like the ultimate form of his literary expression—uncut Shakespeare, so to speak. In his classic 1949 study The Wheel of Fire, G. Wilson Knight set this ostensible outlier at the center of the canon, and, more recently, Kiernan Ryan’s Shakespeare’s Universality found in Timon’s misanthropic detachment the key to what he considers Shakespeare’s defining literary quality: his radical, as opposed to reactionary, universality. Absent the usual trappings—the complications of romantic love, cross dressing and mistaken identity, multiple plot strands to untangle—there’s nothing here to distract us from Timon’s brutal speeches late in the play, and some of the darkest lines in all of Shakespeare. Take, for example, the twisted epitaph Timon writes for himself: “My long sickness, of health and living now begins to mend, and nothing brings me all things.”

The singular nature of this play, brought to life by Hunter’s exceptional lead performance, is reason enough to see this production. Another is the wonderful music: For much of the show, from the back of the stage, a live trio (Chris Biesterfeldt, Philip Coiro, and Joshua Johnson) performs a generous number of slinky Greek tunes arranged for drums, clarinet, guitar, and bouzouki. As the Greek Singer, Kristen Misthopoulos joins them on several numbers and also delivers a memorable rendition of the mysterious, metaphysical Sonnet 53, set to music by Michael Bruce: “What is your substance,” it begins, “whereof are you made, that millions of strange shadows on you tend?” In a nice touch, a copy of the poem is provided as a program insert so that, after the show, you can replay the musical performance in your mind and ponder the intertext between the sonnet and the strangest Shakespeare play.

Timon of Athens runs from January 11—February 9 at the Polonsky Shakespeare Center.

Under the Radar 2020: The Shadow Whose Prey the Hunter Becomes, Not I, & More