Like many shows that rely heavily on audience participation, one is likely to encounter a bit of hesitation at the start of Every Brilliant Thing. In the intimate black box of the Barrow Street Theatre, bereft of set and decoration, audiences are quick to laughter, like nervous strangers on a blind date, as they navigate the rules of a space where there’s no fourth wall to provide the warm comfort of anonymity. Will this be corny, one worries, or embarrassing?

Those questions inevitably arise as Jonny Donahoe, the chubby and likable—in that uniquely British way that’s hard to express or deny—solo performer in the show he co-wrote with Duncan Macmillan and premiered in England, begins a monologue about growing up with a suicidal mother. But they don’t linger long. Donahoe, a stand-up comedian in the U.K., has the peculiar ability of those successful in his profession, much like preachers and motivational speakers, of almost instantly endearing himself to an entire room full of people. There’s nothing natural about this, and yet Donahoe makes it seem inevitable that we’ll all like and listen to him.

The list of “every brilliant thing” (that is, “everything worth living for”), our narrator tells us, began after his mother attempted suicide for the first time. As he recounts the sobering events surrounding that period of his childhood, seated audience members are asked to read out additions to the compendium, including pleasures as simple and tangible as ice cream and as abstract as “deciding you’re not too old to climb trees.” Others in the audience are asked to stand up and assume a character in the narrator’s tale (his father, his schoolteacher, his lover), guided by prompts Donahoe provides aloud.

At first, it’s not quite clear how audiences are meant to treat this exercise. “No, this is a British show,” Donahoe chides playfully, after theatergoers start to applaud the bespectacled, gray-haired man first selected to play a larger part. “Maybe at the end, one clap and a nod.” While clapping may not be encouraged, Donahoe does surely want us to laugh—and he succeeds. When a man enlisted to assume the character of a veterinarian putting Donahoe’s dog, Sherlock Bones, to sleep, Donahoe asks him to inject the “animal,” represented by the man’s coat, in the thigh with a pen. “No, the thigh,” Donahoe hilariously corrects, after the man presumably chooses the wrong side of the coat to jab.

As the show goes on, and the narrator chronicles his years in college and beyond, his own struggle with depression, his growing, colossal list of brilliant things, as well as his mother’s subsequent suicide attempts, something peculiar happens: Donahoe almost entirely stops feeding the recurring characters lines. And yet, unguided, they somehow instinctively know what to say. Their improvised lines, even when monosyllabic, are perfect. Upon seeing them a second or third time, it’s clear: These unsuspecting theatergoers have in fact become those characters, as persuasively as Donahoe embodies his. It’s not quite magic, but it’s something close to it, one of those incredible, transformative phenomena of collective imagination.

When it comes to the subject of suicide, Every Brilliant Thing avoids nearly every pitfall. It’s subtle when it could be maudlin, light when it could be overwhelmingly harrowing. Of course, things occasionally get a little syrupy: “I have some advice for anyone who has been contemplating suicide,” the narrator says, basking in the glow of new love after a “difficult” Christmas. “It’s really simple advice. It’s this: Don’t do it. Things get better. They might not always get brilliant. But they get better.” But surely you’ll forgive sentiments like these—perhaps because you want so badly for them to be true.

Look: It’s been a hell of a month in New York, full of anger and sadness, divisiveness and distrust, a reminder that the social contracts that keep this city from falling apart are as fragile as life itself. If only there were a venue large enough for everyone here to see Every Brilliant Thing all at once, as an antidote to these unfortunate truths, so we could remember the remarkable, beautiful things we can create when we work together, and the simple joys of living, even in a world so often dark and imperfect, and so easily broken.

Every Brilliant Thing is now running at the Barrow Street Theatre. 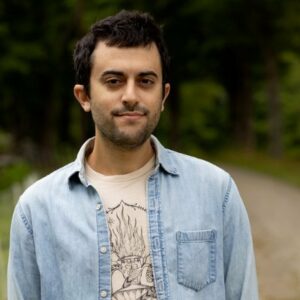 Jordan G. Teicher is a writer, editor, and content strategist based in Philadelphia.

Lypsinka Speaks: Interview with a Surrealist

Post-Youth: An Interview with This Is Our Youth’s Michael Cera