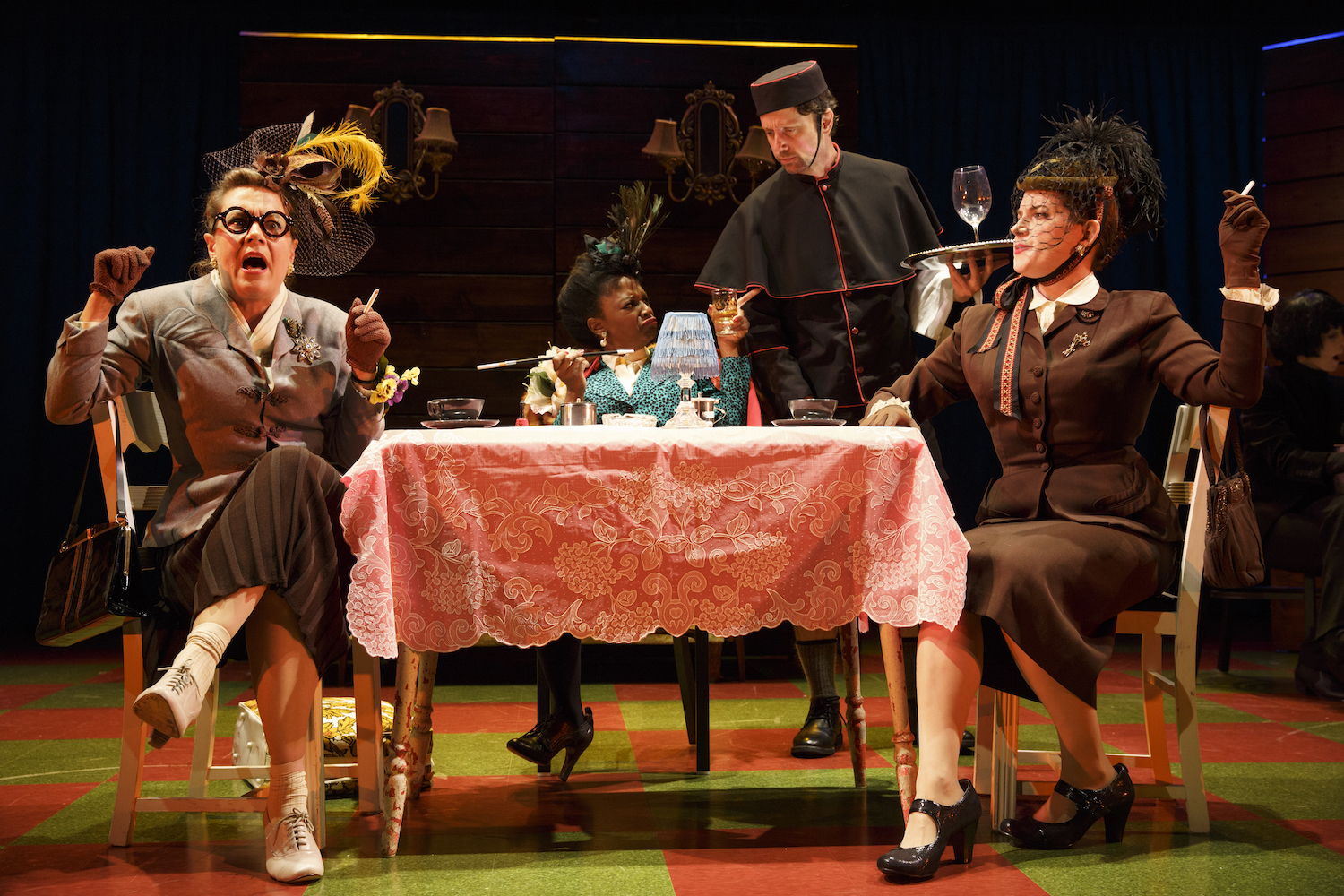 In the New York theater world, there’s weird, there’s really weird, and then there’s totally insane. From the get-go, it’s pretty clear that Fondly, Collette Richland will fall, at the very least, in the first category. Fritz (Vin Night) and Mabrel Fitzhubert (Laurena Allan), a comically vanilla couple enduring an apparently bleak domestic existence, are introduced by a piano-playing narrator dressed in churchly vestments. Their speech is stilted and ironically melodramatic. Sometimes they blatantly mispronounce a word—no explanation provided. The fourth wall here isn’t merely shattered, it seems as though the playwright has never even heard of it.

By the time Fritz and Mabrel escort a friendly neighborhood political representative (Greig Sargeant) through a Chronicles of Narnia-style secret door to a European hotel straight out of Wes Anderson central casting, Fondly has surely progressed into the second category of New York theater. Still, the humor, at this point, feels novel and the play remains charmingly enigmatic. But it’s not too long before it jumps the shark—or, more fittingly, perhaps, the six-legged magical pig, an actual element in this play—and lands into territory that only the most adventurous, or tripped-out, theatergoer might appreciate. Everyone else will probably leave during intermission, as many did during the performance I attended, or wish they had at some point during the show’s even stranger second half.

What plane of reality is Fondly even operating on, exactly? Is this all a dream, one wonders, or a dream within a dream? Is it a yarn spun by the mysterious radio host who gives the show its name? Who are these characters anyway? Are they meant to be taken at all seriously, even on a metaphorical level? These questions may not seem too much to ask, but sit through all two hours and 45 minutes of this show and you’ll be no closer to answers. If you’re still curious about what actually happens in the play, there’s yodeling, a dancing demon, and a cameo from Jesus Christ, among a slew of increasingly bizarre images, characters, and situations. But it’s not worth describing this lunacy in full, because it’s unclear whether Sibyl Kempson, who wrote the show in conjunction with Elevator Repair Service, truly knows the underlying logic behind it.

Being weird is fine, and challenging audience expectations is generally good, but both should be done with intention. Frequently, Fondly is hopelessly indecipherable, which isn’t in itself an issue. But beyond a few laughs, there’s nothing gained by sacrificing a comprehensible plot and real human characters. Baffling an audience simply for the sake of it, with no obvious larger purpose, isn’t a virtue, but an exercise in profound and altogether unpleasant alienation. Kempson and Elevator Repair Service may indeed have some greater insight into this seemingly nonsensical world they’ve created, but, if so, they’re certainly keeping their cards close to the chest. For the rest of us, Fondly is just pure insanity.

Scenes from the Elemental: Antigone at BAM