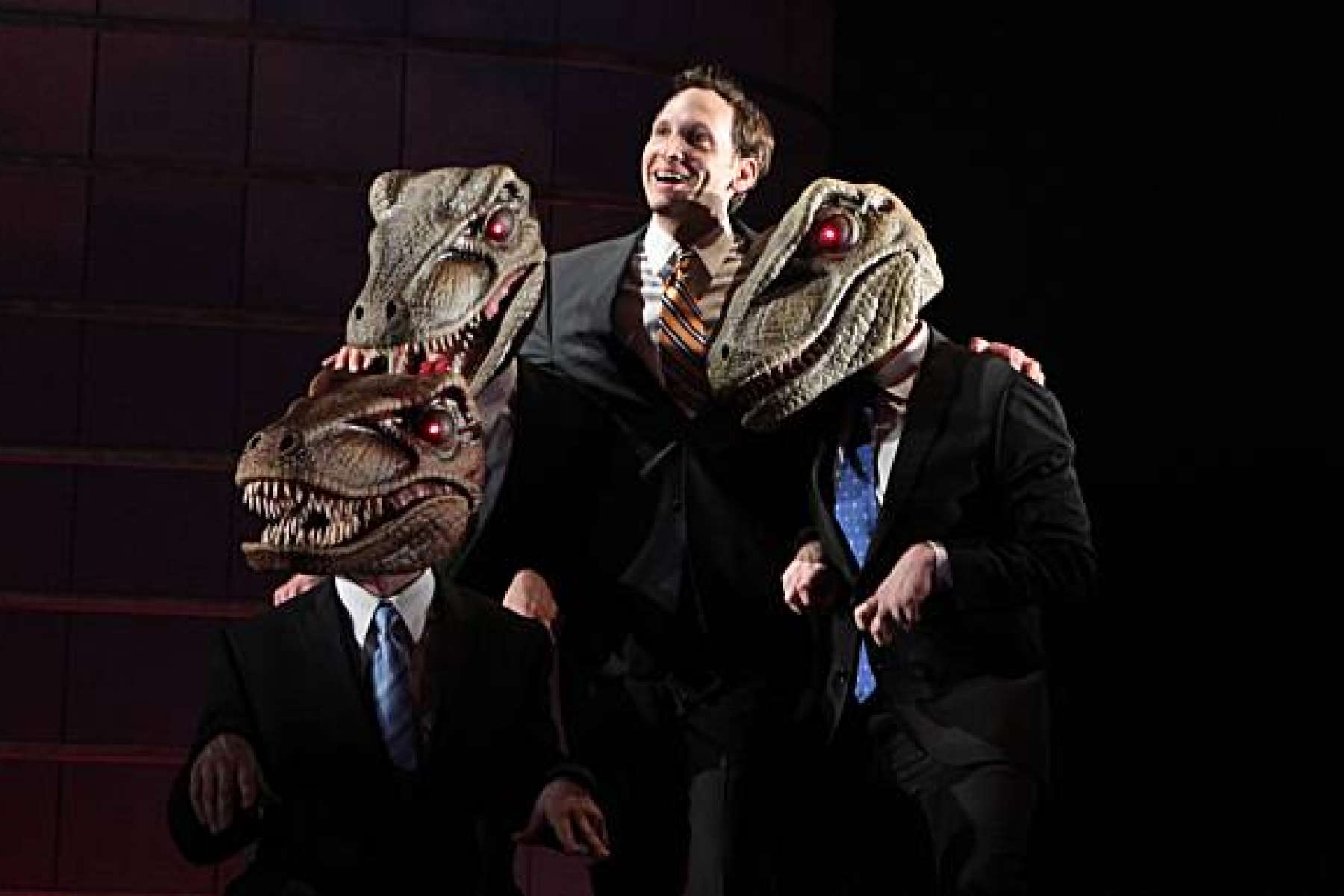 “We’re going to put it together and sell it to you as the truth,” proclaims the lawyer for the villainous CEO Jeffrey Skilling, played with surprising nuance by song-and-dance man Norbert Leo Butz, at the outset of Enron, referring to the grand spectacle that’s about to unfold before our eyes. The calamitous fall of the energy giant in 2001, a harbinger of the financial meltdown to come, has been exhaustively documented, first in the 2003 book Enron: The Smartest Guys in the Room by Bethany McLean and Peter Elkind, and later in Alex Gibney’s 2005 Oscar-nominated doc based on that source. So the latest incarnation, a ballsy Broadway musical, is smartly less concerned with the how’s of the scandal than with asking “Why?”—as the company’s own tagline urged in its advertising.

But perhaps the biggest question surrounding this show written by Lucy Prebble and directed by Rupert Goold is why it’s even on Broadway in the first place. Not only does Enron lack both the Disney brand and any star wattage (hello, Denzel!), it’s just downright weird. Which is also what makes the musical so exhilarating. While Prebble’s writing is quite tame and mainstream accessible, Goold’s production itself is about as avant-garde as they come—more suited to a downtown venue like the Public Theater (which, heaven knows, could use a work like this instead of the current Bloody Bloody Andrew Jackson). Indeed, the behind-the-scenes quartet of Anthony Ward (scenic and costume design), Mark Henderson (lighting), Adam Cork (music and sound design), and Jon Driscoll (video and projection) are the true stars of the show.

The story of Skilling’s Icarus-like flight up through the ranks of the Texas gas and oil company founded by good old boy Kenneth Lay (Gregory Itzin), aided by wunderkind and eventual CFO Andy Fastow (Stephen Kunken) and egged on by his sometime mistress and fulltime nemesis, the fictional Claudia Roe (Marin Mazzie), takes place in an American ‘90s straight out of Orwell. Beginning with Enron’s board of directors, comprised of tailor-suited, cane-tapping blind mice and Fastow’s raptors (likewise, well-dressed actors wearing oversized lizard heads—with glowing red eyes) that gorge on debt, the piece becomes ever more surreal along with the morphing of Enron’s corporate culture. The sleek monolithic column center stage serves as both the headquarter’s façade and a screen for projecting images of Bill Gates, Clinton during the Lewinsky scandal (lying about his telling people to lie—which nicely broadens the context), flowing stock market numbers, and even results from the disputed 2000 election. Thumping techno music and cylindrical fluorescent lights add to the rave-like atmosphere. Oftentimes the “irrational exuberance” that defined the decade and led to Enron’s implosion nearly overtakes the production.

In fact, the only downside to Enron is that, at a running time of two hours-plus, it’s just too much of a good thing. Talky scenes such as Fastow’s creation of the complex LJM shadow company, a Russian doll scheme, lag despite raptors running amuck. The inclusion of the rolling blackouts in California (a result of the deregulation Lay pushed for), presented as a techno number with light sabers, is fun but information overload. The 9/11 terror attacks, the subsequent dry investigation of corporate fraud—even Lay’s funeral!—all easily could have been cut. Then again, as Skilling speechifies Gordon Gekko-like at the end, his greatest achievements were all formed in a bubble of “extreme hope and trust and stupidity.” If nothing else Enron is that rare Broadway show unafraid to take a risk.