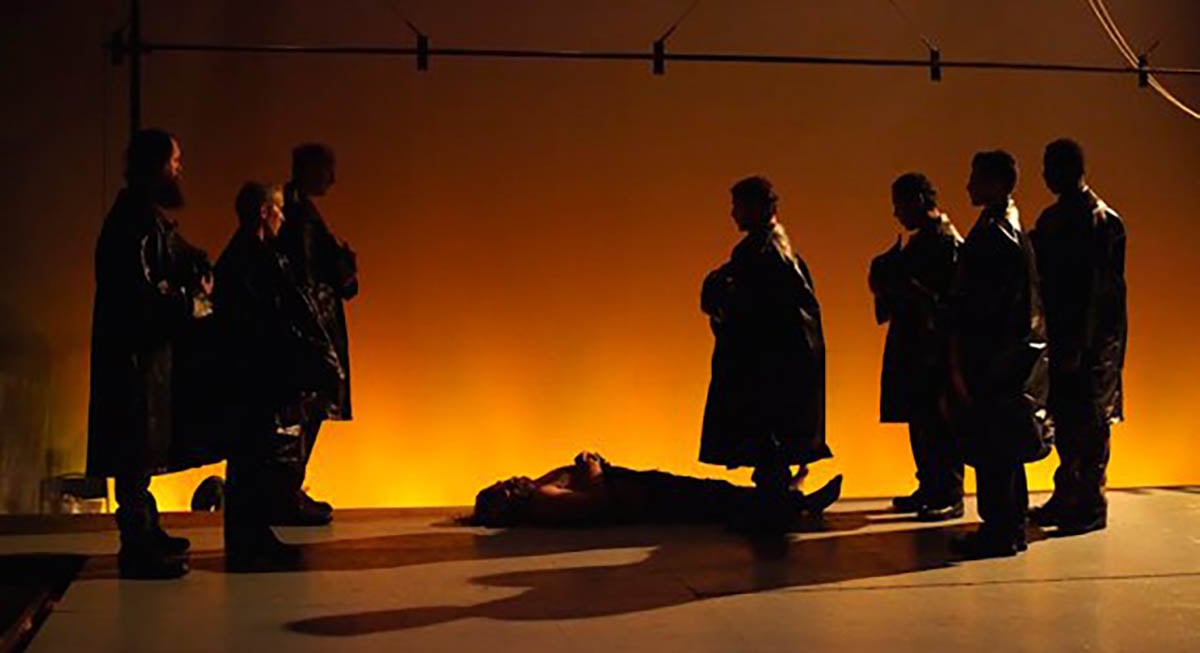 The artistic vision of the experimental theater ensemble the Wooster Group has been so consistently distinct over the years that, if you happen to be a fan, it seems nearly impossible to see it in action, and to come away unsatisfied, at least on some level. Unfortunately, the group’s latest show is an unhappy anomaly: a Wooster Group presentation that hasn’t been directed by the company’s enfant terrible and réalisateur extraordinaire, Elizabeth LeCompte. The reigns for Early Plays by Eugene O’Neill have instead been handed over to Richard Maxwell, who has observed in his interview with Zachary Woolfe of The New York Observer, that he and LeCompte “do not really share an aesthetic, but there is a rigor underneath what we do.”

The rigor is certainly in plain view. Maxwell’s demand that the text be delivered with absolute clarity, without unnecessary inflections, echoes Samuel Beckett’s famously stern and controlled approach to stage delivery. What distinguishes the two in their directorial practice, at least in this case, is that Beckett wrote his own texts—the austerity, and the rhythm, were conceived in the lines, boldly breaking away from realism, to reveal the more obscure and, some would say, more neurotic depths of human psyche. Beckett’s work relied heavily on literary contextualization, as he injected his texts not only with healthy doses of absurd humor and wordplay, but also with references to Shakespeare, Dante, and Proust, among others.

O’Neill’s work is another matter. Known for grandiosity, and possibly staged less frequently of late, due to his propensity for psychological melodrama that doesn’t jibe as easily with postmodern audiences, O’Neill’s works call for actors who can deliver his characters as palpitating flesh and blood. Much of what we hear in Early Plays may lack the dramatic arcs of Long Day’s Journey into Night or The Iceman Cometh, but displays naturalistic speech, laden with mourning for young lives cut short, and for the loneliness, swagger, and toils of ordinary seamen. So it’s surprising to hear one of the show’s principal actors, and the longstanding member of the company, Kate Valk, describe Maxwell’s method: “He doesn’t want to see acting that interferes with the clarity of hearing the writer’s words resonate in the space. You’re not watching ‘interesting choices’ made by the performer.”

“Interesting choices” would have been welcome, in fact. This isn’t to say that all of the performances fall short: The indomitable Valk can probably by now find music in any role she is given, and Ari Fliakos, who had the lead role in the company’s previous production, Le Vieux Carré, at the Baryshnikov Arts Center in New York, is commanding, if not beguiling, in his role as Driscoll. There’s some deadpan humor as well, although bizarrely staged, so that it ends up feeling more like a set of Aki Kaurismäki’s late movie, than a play by a great American modernist playwright.

One could argue that the drastic transformation is the point. The play wouldn’t have been any less broken had LeCompte directed it. The problem is, it would have been more so. The Wooster Group, under her direction, has created an elaborate (some would say, pyrotechnic) theatrical language. What it so often succeeds in doing is rendering the familiar texts strange, to a dramatic, at times even ecstatic, effect. Under Gladwell’s direction, however, the ecstasy is severely pared down, but there’s nothing exhilarating to replace it. Sitting through a scene in which a sailor and a bargirl, who is about to drug him and rob him of his money, chat in an impossibly staccato, mechanistic way, is painful, precisely because it denies any kind of magic, chemistry, or art, in a scene that’s otherwise a naturalistic small-talk. Knowing the company’s previous productions, you may find yourself inventing an elaborate configuration of microphones and screen projections that would have splintered this inane scene in such a way that it could become delightful and surprising again. Merely belching out the lines, as rapidly as possible, doesn’t quite achieve this effect; if anything, it makes it seem like the actors themselves are at a loss, at times, and can’t wait to get through their lines fast enough.

The artistic collaboration between Maxwell and LeCompte (she designed the clean, minimalist set, along with Jim Clayburgh) has led Woolfe to ask what might become of the company’s future without LeCompte, who is 67. Speculations aside, one would hope that the illustrious Wooster Group will not give up on artistic innovation, or on the opportunities to bring new directorial talent into the fold, thus expanding its vision, and preparing the necessary grounds for the future. One could only wish that Maxwell’s production seemed like a vital step in this direction. In the case of O’Neill, however, we have a playwright who cared deeply about his characters, as people. Take this crucial aspect away, without replacing it with some kind of thespian magic, and you may as well dispense with the live staging altogether, in favor of a voice recording. A dull one, at that.