“So now we’re back in touch and we’re up to old tricks,” Craig Finn sings on “Spices,” the second track on the Hold Steady’s eighth studio album, Open Door Policy. Finn’s sentiment captures the band’s ethos for the better part of 20 years, but it takes on a different tone here. The music is dark, even a little sinister, with low, cyclical guitar lines lending a mischievous urgency to the song’s depiction of a night out on the town. When “Spices” reaches its first chorus, accompanied by an eruption of keys and horns, it feels like a brief release of tension. Of course, in true Hold Steady fashion, that release arrives in the form of a drink order: “Vanilla vodka in a diet Dr. Pepper.”

Since the Hold Steady’s 2004 debut, Almost Killed Me, Finn’s characters have partied all over the country. They’ve fallen into wild romances at outdoor festivals, and struggled with personal grief, mental health, and inevitably dwindling youth. The band’s songs have always felt particularly special in the way that they seem to occupy a consistent world, the layered storylines multiplying and branching out with each new album.

While the Hold Steady’s world may have remained consistent, though, their music has taken some turns: After 2010’s slicker Heaven Is Whenever and 2014’s bigger, more radio-friendly Teeth Dreams, 2019’s Thrashing Thru the Passion found the band revisiting the essential elements that formed their early sound, thanks in part to the return of Franz Nicolay. But Open Door Policy is the album that really makes good on the Hold Steady’s continuing vitality, retaining the spirit of the band’s initial output while also offering songs that sound fresh and relevant in 2021.

“I no longer see the romance in these ghosts,” Finn sings on “Unpleasant Breakfast.” With its skeletal verses, which ride on a simple, blunt beat, and a rollicking bridge that comes out of nowhere, the track serves as a deconstruction of what the Hold Steady has been doing since the start of their career. The song’s individual pieces—including horns and a repetitive siren—feel like they’ve been torn from the band’s classics and collaged together to form something that’s both familiar and new. Elsewhere, “Heavy Covenant” is awash in a glow of 8-bit organ keys, while “The Feelers” swings from swooning piano ballad to hair-raising rock jam and back again, each new movement proving as jarring and exciting as the last. These tweaks to the Hold Steady formula are elevated by Josh Kaufman’s crisp, spacious production, which finds a sweet spot that’s polished but never overblown.

At the center of Open Door Policy is a world that Finn continues to expand and deepen, with a distinct vocal style somewhere between talking and singing. The festival setting that figured into Boys and Girls in America is replaced with a hospital on “Lanyards,” but the language remains familiar: “Everybody’s trying to get the right kind of wristband.” Most of Finn’s characters are still musing about partying, but they all have different and increasingly complex reasons for doing so. For instance, matters pertaining to religion and family infuse the lovelorn narrative of “Family Farm”: “Before she took her shot, she said a little grace, said ‘Lord grant me the power to stop these hands from shaking.’”

The Hold Steady’s lyrical interest in debauchery has never been free of baggage. But Open Door Policy is especially adept at tracing its characters back to the heavy and complicated stories that brought them to this point. So when Finn asks, “You wanna go get some beers?” on “Spices,” it feels like a new dimension has been added to what might otherwise just be a signature Hold Steady call to go out and have a massive night. The band’s ability to get to the heart of this change and create compelling songs from familiar scenes helps make Open Door Policy the best Hold Steady album in over a decade.

Wild Pink ILYSM Review: A Disorienting Snapshot of a Life Turned Upside Down

Review: The Hold Steady’s Thrashing Thru the Passion Is a Satisfying Head-Scratcher

Review: Craig Finn’s I Need a New War Soars When It Rises Above the Mire 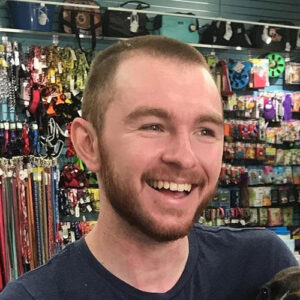 Jordan Walsh is a music writer based in Philadelphia. His writing has also appeared in The Alternative and Magnet magazine.

Review: On Little Oblivions, Julien Baker’s Stark Confessionals Are Given a Hard Edge