David and Peter Brewis of Field Music have carved a unique niche for themselves in the U.K. music world, outlasting many of their buzzy British peers. Their music has always stood out from the post-punk revival of the mid-2000s thanks to an intellectual underpinning and less emphasis on massive shout-along choruses. That tack continues on Making a New World, an ambitious concept album about the aftermath of World War I. Even if you don’t feel the need to follow along with their historical lyrics, these 19 short songs are an entertaining, unpredictable listen.

This isn’t the first time Field Music has delved into the past or current events: Previous projects have included a soundtrack for John Grierson’s 1929 silent documentary Drifters, following a day in the life of a fishing fleet, while their last album, Open Here, was inspired by their hometown of Sunderland becoming the first city to declare its vote in favor of Brexit. The band’s interest in WWI dates back to 2016, when they collaborated with electro-pop duo Warm Digits and the Northern Sinfonia orchestra on the soundtrack for Esther Johnson’s film Asunder, a historical retelling of the war’s effects on a small English town.

Making a New World was born out of another WWI project, commissioned by the Imperial War Museum to commemorate the 100th anniversary of the Armistice. The initial inspiration for the songs here was an image from the museum’s collection that used “sound ranging” to capture vibrations of gunfire. Like a seismograph, this visual technique’s peaking lines artfully represent the bullet-filled sounds in the minute leading up to 11 a.m. on November 11th, 1918, and the moment of smoke-clearing silence after the war’s end.

Each of the album’s songs focuses on a different facet of WWI, unfolding in chronological order like a series of art-rock audio plays. “Coffee or Wine” sets the scene with a serviceman’s journey home to a post-war world, as its narrator stomps through off-kilter piano pop. “A Change of Heir” uses spooky slide guitars as an introduction to Dr. Harold Gillies, whose pioneering skin grafts for injured soldiers led to some of the world’s first gender reassignment surgeries. “Only in a Man’s World” is a feminist outcry against the taxation of sanitary pads, set to jittery disco in the tradition of Talking Heads, while the warped grooves of “Money Is a Memory” most closely recall late ’70s oddballs Godley & Creme.

The album marks the first full-band release from Field Music since 2007’s Tones of Town and the quartet jumps between musical styles adeptly. The Brewis brothers’ vocals sound as effortless as always, delivered with a laidback breeziness belying the songs’ sophisticated melodies. They’ve clearly studied the music of their predecessors with the same enthusiasm as WWI textbooks, and never has a history lesson sounded so strangely funky. 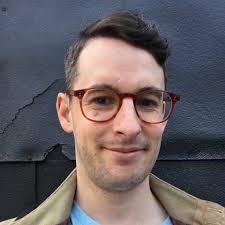 Jesse Locke is a Vancouver-based writer and musician. He's the co-founder of We Are Time Records and author of the book Heavy Metalloid Music, the biography of 1970s psych/proto-punk band Simply Saucer. Jesse currently writes for outlets including Pitchfork, Bandcamp Daily, and CBC Music, and plays drums for bands such as Tough Age, Big Rig, and CHANDRA.