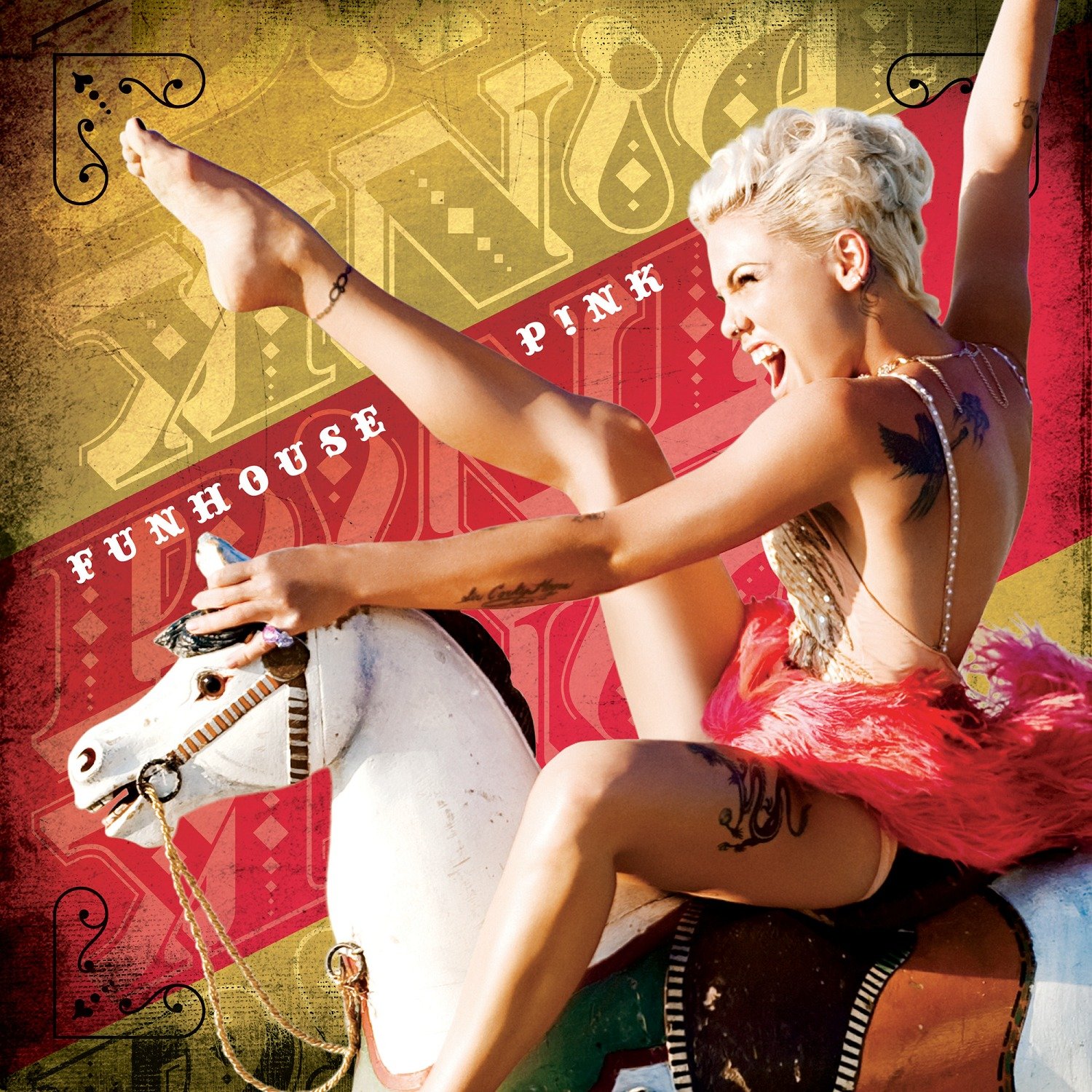 As divorce albums go, no one will mistake Pink’s Funhouse, a chronicle of the dissolution of her marriage to motocross driver Carey Hart, as a Blood on the Tracks-style emotional bloodletting. From the first line of the album, “Guess I just lost my husband/I don’t know where he went/So I’m gonna drink my money/I’m not gonna pay his rent,” it’s clear that Pink is attempting to find some kind of middle ground between taking her breakup seriously and filtering it through the sneering, ironic remove that has characterized much of her work to date. While this doesn’t always work to her advantage (the problem with adopting an ironic stance is that it calls any future attempts at sincerity immediately into question), it does give the album perhaps greater thematic heft than any of her previous efforts. What ultimately works best about Funhouse—and what draws the shortcomings of Kelly Clarkson’s similarly moody, unjustly reviled My December into sharp relief—is that, despite its surly tone, the album loses none of the massive, punchy hooks that have made Pink one of the most consistent, reliable singles artists of the last decade.

Working primarily with Max Martin and Butch Walker as co-producers and co-writers, Pink balances both her emotional reaction to her divorce and her desire to bring a definite rock edge to her pop songs. “I Don’t Believe You,” which boasts a phenomenal vocal turn that is both vulnerable and accusatory, is driven by a sparse electric guitar riff, while “Please Don’t Leave Me” and “It’s All Your Fault” are in a similar nervy power-pop vein to “Who Knew” from I’m Not Dead.

One of the things that keeps Pink interesting, however, is her refusal to stick to a single stylistic template, so she and her collaborators move in a few new directions: The title track is a nonstarter with its tired brand of Maroon 5-style funk-lite, but the blues-rock arrangement of “Mean” gives the singer the opportunity to showcase her power, while “Crystal Ball” is a surprisingly credible folk-pop ballad. Fully half of the songs on Funhouse sound like viable singles, with “So What,” the #1 hit that opens the record, a comparatively middling effort. Both Martin and Walker, proven commodities at this point when it comes to structuring memorable hooks, contribute to the album’s standout cuts, while collaborations with Danja (on oddly-chosen second single “Sober”), Tony Kanal and Billy Mann are more mixed in their results.

With just a handful of misfires in the production, it’s the album’s songwriting that is more often problematic. Despite its caustic opening lines, “So What” never reveals itself to be anything more substantive than a schoolyard taunt, while the “I like to party/It’s genetic” message of “Bad Influence” feels like a retread of “Get the Party Started.” “Glitter in the Air,” with its emo-esque “You called me sugar” bridge, is overwrought with its clichéd imagery; worse, the chorus of the title track (“This used to be our funhouse/But now it’s full of evil clowns”) reads as straight-up camp.

Fortunately, there are enough clever one-liners and enough moments of reflection and candor to give Funhouse substance. In fact, the hooks are arguably the strongest on the surliest and most melancholy material, as though Pink were on a mission to prove that living well is the best revenge. If the album doesn’t always make that point in its words, it consistently makes that point by being as fun a pop record as Pink’s albums tend to be.