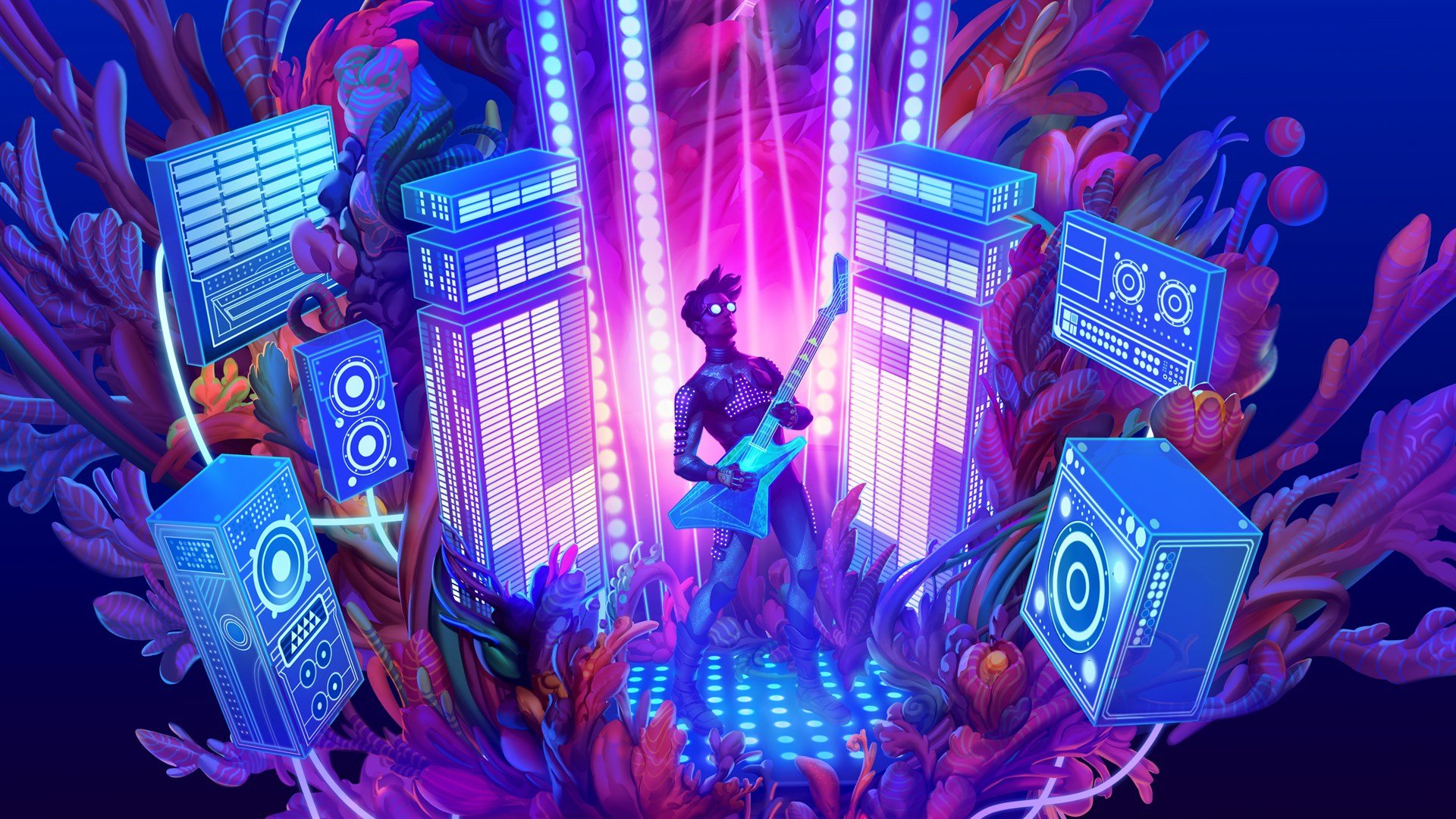 The first thing that you glimpse after booting up The Artful Escape is an idyllic patch of forest, and a poster of a Bob Dylan analogue named Johnson Vendetti stapled to a tree. It’s a quaint note that doesn’t prepare you for the wild trip through the unknowable cosmic ballet of entropy that follows across several hours. But it’s not as if anything would. Turns out that the point of the game, and the lesson that its protagonist must learn, is that the only way to approach a world of infinite possibilities is to just dive right into it.

Johnson Vendetti’s young nephew, Francis, has been roped into carrying on the family name and business at a music festival in his hometown of Calypso, Colorado. The entire town’s identity hinges on it being the birthplace of Johnson Vendetti and keeping his folk-rock legacy alive. And Calypso’s best hope of doing so lies with Francis, which is a problem since he’s ambivalent at best about his uncle’s chosen genre. Imagine Jakob Dylan secretly wishing that he was in Dream Theater just as “One Headlight” was on the verge of breaking out and you have an idea of the dilemma that Francis is facing ahead of his big debut.

That night, though, the kid is sent on a different trajectory when he makes the acquaintance of an aging rock star named Lightman. The music god, who believes that Francis’s very real talents in hard rock would be better served thousands of lightyears away from Calypso, sweeps him up and takes him to a music-loving psychedelic miasma called the Cosmic Extraordinaire.

On the surface, The Artful Escape is an intergalactic rock n’ roll farce, writ large and loud. The Cosmic Extraordinaire is a breathtaking place of unique and freaky alien designs, eschewing palette-swapping characters for a Douglas Adams-like approach to taxonomic chaos. It’s a universe of talking plants, sentient nervous systems, and walking, talking fungi, surrounded by astounding galactic tableaus of massive exo-planets, ruled over by flying, benevolent jellyfish and Dada-esque amalgams of objects and human features. Once young Francis arrives at the Cosmic Extraordinaire, his only real companion in the face of infinity is a holographic guitar that plays riffs that can light up cities, speaks to animals, and helps him to defy gravity.

Just beyond the wide-eyed awe of the heretofore unknowable universe that our young hero must traverse using the power of rock is an all-too-relatable allegory—a treatise about impostor syndrome, nostalgia, legacy, and the expectations of society at large. Luckily, it’s anchored by a subtle, sharp script, a voice cast that’s very much in on the joke, and surreal but effective sci-fi comedy. This is the kind of visually audacious game where a 12-eyed cephalopod that is as tall as a three-story building and speaks only in the language of sweet wailing sax music imparts wisdom on the importance of creative independence.

Playing The Artful Escape is like watching a sharply written rock opera of Hitchhikers’ Guide to the Galaxy, and it would be exactly as brilliant as that sounds if only the player had more input on Francis’s gradual artistic progress. Sure, you get to control the more cosmetic choices of that progress, like Francis’s rock-star name, backstory, and outfit, but otherwise, all the player does is keep pressing forward, jumping the occasional gap in the road, and playing a cosmic version of Simon with your guitar to communicate with alien species.

Throughout The Artful Escape, you watch Francis come up with absolutely soaring guitar solos instead of being able to creatively orchestrate them yourself to any particularly fulfilling degree. Which is to say, this is most certainly not your journey. While it’s still absolutely enthralling to witness, laugh-out-loud hilarious to hear, and blissful to listen to, it’s hard to shake the sense that you’re not as much a part of the joy as you could be.

But then, that’s more an issue of the medium than the message. The Artful Escape is more of a trippy coming-of-age story than it is a career mode in Rock Band. Even without the depth of interactivity, it’s an absolute blast seeing Francis unearth the self-aware, dorkily confident space lord lurking beneath his black turtleneck, and even more so watching him navigate such a bizarre passion play about fame and the responsibilities that talent brings. In the end, seeing an artist slowly figure out who he is and decide time and time again that it’s too late to ever go back to being pigeonholed is the most profound aspect of this game’s journey.

The game was reviewed with a retail copy purchased by the reviewer.

Review: Tales of Arise Winds Through Rich Moral Terrain, But Only Up to a Point