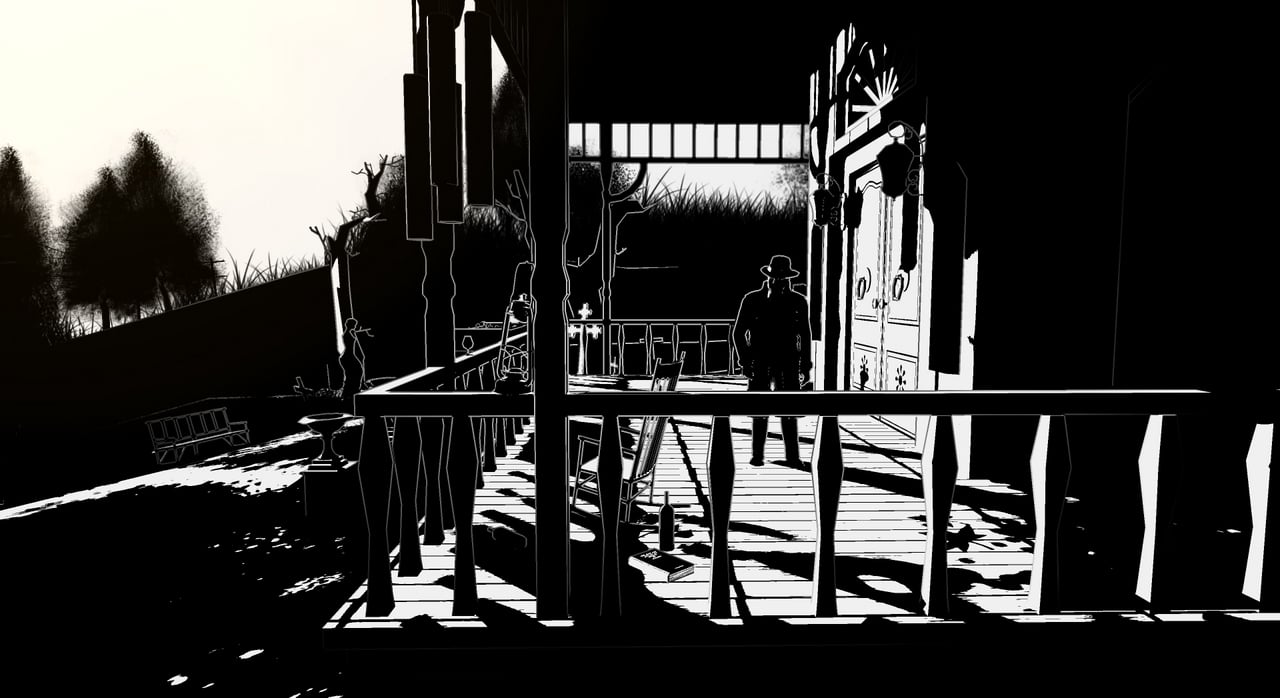 Set in a Boston manor lit by small flames and the spotty electricity of 1938, White Night is noir horror in absolute black and white. The clean edges between light and shadow vibrate ever so slightly, and the camera, which cuts from one fixed position to the next, wavers and floats as if held by hand. The combination of these movements, one apparent and one subtle, evokes a solid sense of place, as if you were looking at that world from within it, rather than outside of it. The beautifully bold rendering style builds on this substance, and the marriage between the two begins to play tricks on your eyes. Despite the game’s modest polygon count, when the nameless hero is framed, for example, in headlight beams, the lighting of his silhouette swaps some connections in your visual cortex and the scene becomes miraculously photorealistic for a moment here or there. It’s an entrancing sensation to alternatingly let your mind be tricked and to fight against such trickery.

But White Night is more than just a beautiful experiment in visual perception; it’s also a satisfyingly dread-inducing game both mechanically and thematically. You’re trapped in an abandoned mansion by some unknown force, so you wander the halls in search of a way out as forces of good and evil fight for your soul. A spirit of the mansion’s family has taken the form of ghosts scattered about the house, and one will kill you instantly if it catches you. Part of the history of these ghosts can be discerned from the family’s journals and notes left around the house, but their true nature is never revealed, and the mystery of whether the evil beings are individual souls or one soul fractured into many pieces is part of what makes them so wondrously creepy. The journal entries grow a little heavy-handed and verbose to be taken very seriously individually, but traces of the family’s addictive and obsessive pasts of psychological abuse trickle through all the words, and when their ethereality is eventually substantiated in disturbing photographs and artifacts pinned up around the house, that once gratifying deep-seated knot of dread in your gut starts to grow and make you sick for fear of what you might find when you open the next door.

As you venture from the safe zones of electric candelabras and into the darkness with only a match lighting your way, ghosts will undoubtedly pop up on you, and the silence of stumbling upon one waiting stoically in the shadows is way more satisfying than the violence of the game’s few jump scares. You might be tempted to run away, but the light mechanics encourage the tempo of a walk. Running burns through matches faster than walking, and if you run out of matches, the darkness itself will kill you pretty quickly if you don’t get to light. If you’re brave and want to battle the ghosts, OSome Studio has provided no combat mechanics to do so, and even though it sounds unfair to not be able to fight back or defend yourself, the rules of play are clearly outlined and abided by, so death and respawns are quick, sensible, and non-frustrating. Some might argue a lack of frustration in survival horror to indicate a lack of challenge, but the difficulty here isn’t placed on reflexes but on the mind, taxing it with terror, probing it with environment puzzles, and forcing it to plan to avoid encounters.

The force of good opposing this darkness is a benevolent ghost that glows white in the darkness. Most of the game’s narrative is structured around picking up on the clues it leads you to, and the cutscenes moving these scenarios forward are skillfully and beautifully framed. The plot twist near the end is pretty predictable as early as half way through, but it doesn’t ruin the anticipation of discovering how that twist will conclude. It’s a steady build that’s aided by the well-directed cutscenes and the surprise of beautiful framings of new parts of the world.

Unlike the beauty of White Night, though, its mechanics cannot make it to the end without spoiling the goodness it nurtured. In the last quarter of the game, the ghosts start coming in droves. And disoriented by their growing numbers, you try to maze your way through their amorphous patrol, but they keep killing you. You grow more annoyed with each passing retry, so you begin to run erratically, but your foolhardy impatience only increases your death rate. For the most part, White Night is an incredible walking slow-burn of dread, but in these moments its terror is reduced to a cumbersome triviality for the sake of false tension. The pain certainly sours the experience after the fact, but it doesn’t distract from the game’s beauty in the moment. Just look at that edge between light and shadow. This isn’t a battle that can be won in one night. Darkness and light will dance their beautiful back and forth until the end.

OSome Studio’s White Night is available now on PlayStation 4, Xbox One, and Steam for PC, Mac, and Linux.