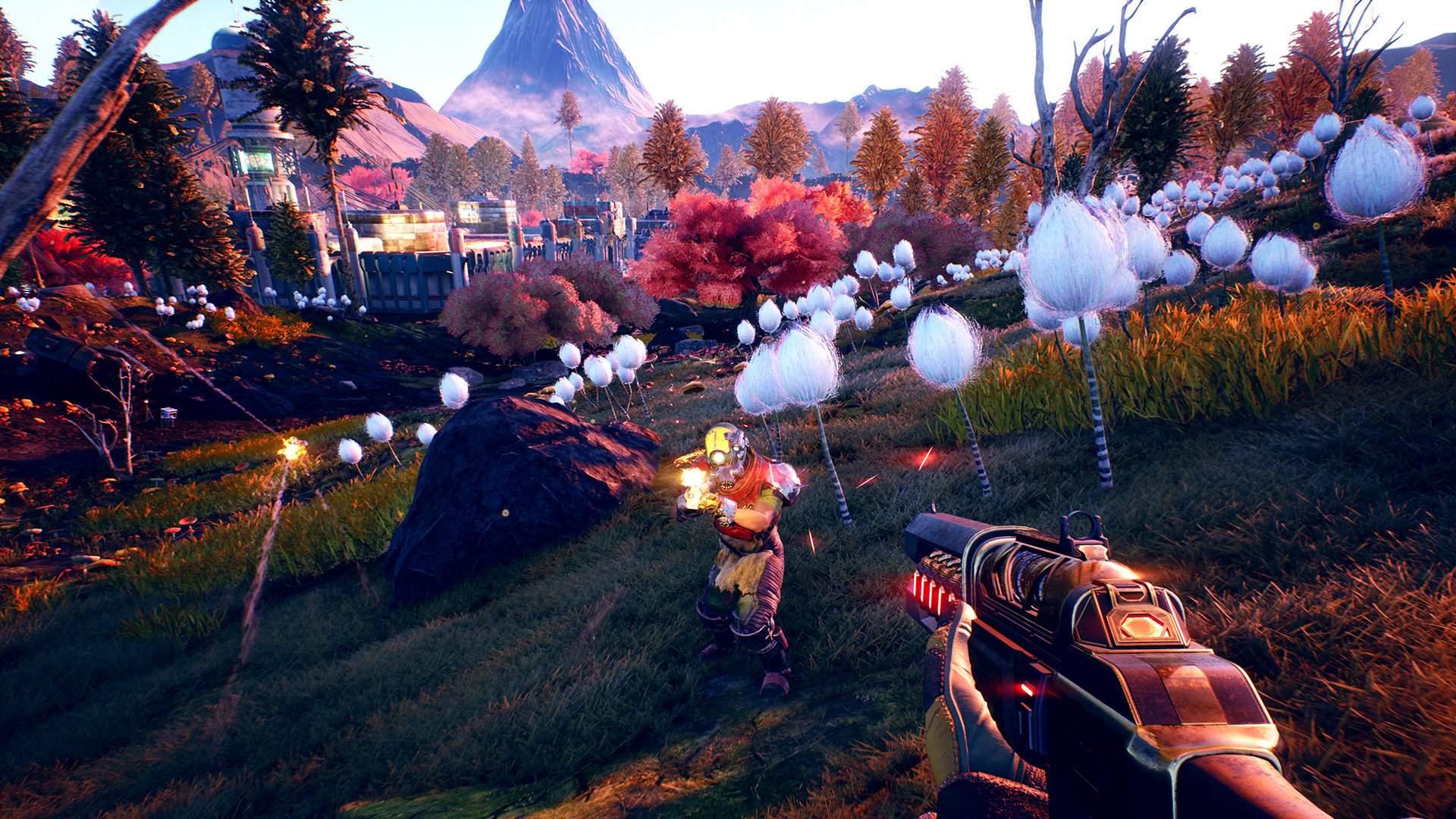 In space, everyone can hear you spend. Walk up to any of the vending machines run by the corporations ruling the Halcyon star system at the center of The Outer Worlds and their jingle will play; for one, the Walmart brand equivalent with the moon-headed mascot chirps, “It’s not the best choice, it’s Spacer’s Choice!” Unlike their recent old-school computer RPGs, Obsidian’s latest game builds from their sterling work on Fallout: New Vegas, which added a messier set of choices and a stronger sense of place to Bethesda’s initial blueprint. A similar skewed sense of humor is on display here, with the Fallout Vault Boy mascot now an equally meme-able moon man and the setting no longer a nuclear wasteland but a capitalism-ravaged outer space where colonizing corporations own your ass so thoroughly that suicide is considered “damage to company property.” Next of kin gets stuck with the fine.

The first-person scavenging mechanics of those latter Fallout games are also present here. Throughout The Outer Worlds, you roam planets, moons, and asteroids, opening every container and picking up every object highlighted in blue to either sell later or scrap for parts to repair your equipment. You gradually acquire better guns and better skills, and you’re compensated in money and experience points for labor on story quests, killing hostile creatures, and discovering new locations. Experience is doled out for finding, say, a set of ruins or a bandit camp, but most importantly, you get it for finding more stores, more vending machines, and more places to spend cash and sell hoarded junk.

Of course, most role-playing games work this way; the sense of progression keeps you pressing forward, and it’s why so many other genres of video games long ago adopted the superficial siren call of a climbing progress bar. But such mechanics sit awkwardly next to the anti-capitalist caricatures of The Outer Worlds, where the primary antagonist is a company collective called The Board. The way to progress here is by essentially climbing the corporate ladder, indulging in the consumerist need for more stuff. Happy with your laser gun? You won’t be once you see the damage numbers on the new model—Plasma Carbine 2.0 makes the original Plasma Carbine look like last year’s iPhone! There are upgrades to find and money to spend to make yourself a better, stronger, faster engine of corporate dismantlement, though you can choose to be a corporate stooge, too, because games of this sort are all about options.

Throughout, the game’s mechanics are satisfying in a compulsive sort of way: Items make a pleasing thud as you stuff them into your inventory, and the guns chatter violently as bullets and lasers fly through the air and toward their targets. But the normal difficulty mode becomes quite easy under such a comedically huge deluge of content and consumption; enemy encounters grow trivial, and you’re so inundated with junk that the game becomes more about managing a useless pile of consumables and an arsenal with a limited shelf life. There’s even a button to helpfully break down the umpteenth outmoded pistol in the umpteenth locker so it can at least be useful as spare parts. The biggest challenge here is, it seems, learning to not grab every single object in a room, because while it may feel good to pick up that temporary stat-boosting box of tarmac and cheese, you don’t really need it. (You have five already, damn it, and an inventory limit to think about.) Better to leave the empty space for something really shiny. What if, for example, there’s a Plasma Carbine 3.0?

On some level, Obsidian has succeeded at rendering a hellscape of vapid consumerism through the mechanics of the Bethesda scavenge ‘em up, but the game’s anti-corporate ideals clash with how the only way to move forward is to indulge in all the excesses of that hellscape. Being swept up in that system has no adverse effects on you, after all, because you’re special. People are worked to the bone under the boot of capitalism, then buried in a hole as long as they’ve paid their graveyard admission fee, but not you, because you’re a climber. You get the big life-and-death choices, such as the ability to decide whether to ally with the insidious Board or the revolutionaries who say all the right things but inevitably hide some dirty secret. As the player character, you’re the portrait of exceptionalism, a CEO-in-waiting, a person infused with the divine right to step on the little people. You seize the means of production and then, most importantly, collect the cash and the experience points for doing so. It’s revolution for people who think cooperating within the system is the only way to affect change.

Which isn’t to say that The Outer Worlds is ineffective or unfulfilling as a role-playing game, as it’s often a pleasure to bask in its sly writing and dense world-building, in occasionally talking your way out of conflicts rather than blasting your way through them. But it’s tiresome to watch the game continuously dance, and with such a mercilessly wacky tone, on the edge of some self-aware revelation about its own mechanics that never comes.

The best storylines here actually step away from the overt satirical skewering of corporations, building your companions into richer characters than any of the dull quest-givers that inhabit the rest of the game. It’s only in those storylines that The Outer Worlds slows down long enough for someone to express a human feeling. Simply spending time with members of your party, like the vicar who’s done prison time or the excitable engineer who has an adorable crush, feels far more meaningful than any of the ostensibly massive decisions that put the lives of anonymous colonists into the hands of the all-important player. The people whose lives you alter are relegated to hapless bystanders when they’re not the butt of jokes for being face-deep in the corporate Kool-Aid. The game is so zany and so mired in its traditional progression systems that it ceases to say anything of note. The human stakes too often buckle beneath its comedic broadness, feeling as remote as corporate overseers in their ivory towers.

Review: Luigi’s Mansion 3 Is a Blast of Slapstick Hilarity and Cooperative Play

Review: Overwatch’s Switch Port Is Great on the Go but Not at Home