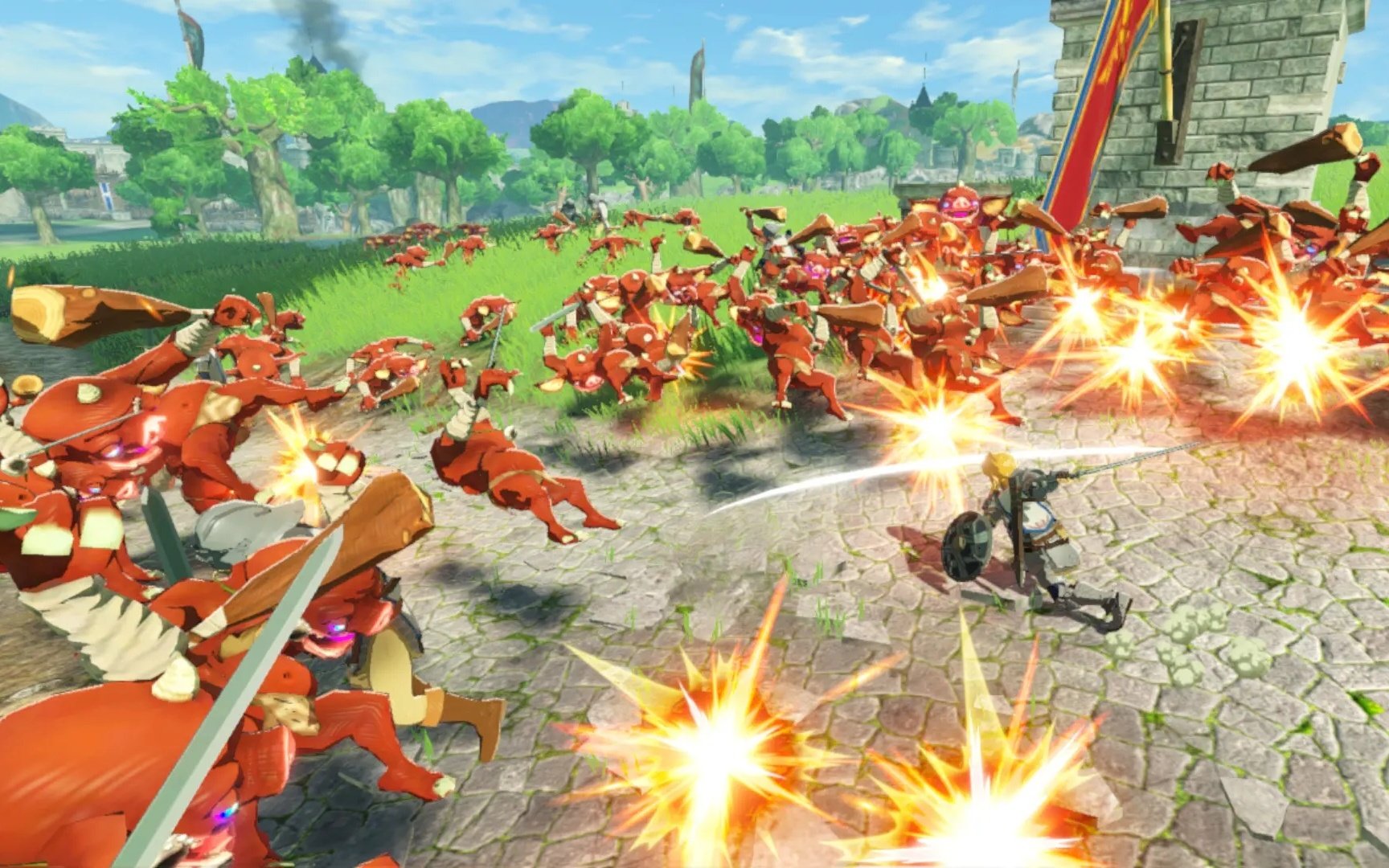 When Legend of Zelda: Breath of the Wild launched alongside the Nintendo Switch in March 2017, it felt like a wake-up call to developers the world over, showing that with enough creativity, a game’s horsepower scarcely mattered. Now, Hyrule Warriors: Age of Calamity has arrived on the scene as if to further test that premise. It’s rare that a first-party Nintendo game feels like it’s rubbing up against the upper limits of what the Switch can do, but that’s exactly the kind of judder you can feel the second the playing field in Age of Calamity gets remotely busy. Lucky for us, the experience of playing it remains addictive and delightfully rowdy in spite of the creaky gameplay and engine.

Age of Calamity, a pseudo-prequel to Breath of the Wild, shows us the last optimistic days of the Hyrule that was. As Calamity Ganon lays waste to Hyrule, a stray Guardian robot manages to open a portal and travel back in time to warn Link, Princess Zelda, and King Rhoam of the coming catastrophe. Creating an alternate timeline, the king orders Link and Zelda to travel around the world, getting the greatest champions of each of Hyrule’s tribes to pilot the massive Divine Beasts who can defend Hyrule from the apocalypse.

Here, massive armies of beasts, knights, and wizards are looking to burn Hyrule to the ground in Ganon’s name. And, of course, this being a Warriors game at heart, annihilating those armies is much easier than it is in Breath of the Wild. Arguably too easy. The sporadically winning formula from the Warriors series hasn’t changed much, as the vast majority of enemies our heroes will face are hapless cannon fodder that you can either run past to reach your goal on the map or slay en masse with three presses of the Y button. You can count on one hand the number of times that any of them will take a swing at you, let alone have it connect, during an entire playthrough. Still, this formula persists for a reason, as there’s undeniable satisfaction and glee to obliterating whole armies in a matter of minutes.

What Age of Calamity lacks in difficulty it makes up for in variety. The game’s greatest success is its huge roster of characters—the forebears of known characters from Breath of the Wild—and how wildly different they play as they dazzlingly wield the magic powers from the prior game’s Sheikah Slate. It’s easy to button-mash through Age of Calamity, but more satisfying is trying to figure out the exact Sheikah Slate power to stun your enemies with, then experiment with how to chain melee attacks into elemental barrages, arrow storms, and spectacular feats of swordplay. Just as the original Hyrule Warriors meshed Dynasty Warriors’s mechanics with Twilight Princess’s aesthetic and gameplay extremely well, it’s impressive how seamlessly Breath of the Wild adopts this combat system, possibly more so here given how much this game kicks Breath of the Wild’s less popular features—like breakable weapons—to the curb.

Here, advancement is handled by turning the various items and currencies you find on the battlefield into money or ingredients to open up new item shops, craft new items, and complete random challenge stages. While it’s possible to build characters up into overpowered invincible juggernauts with surprisingly little effort, you also don’t necessarily need to in order to do well here. Aside from leveling up your weapons at a blacksmith, you could get along perfectly fine without every other crafting system in the game. The various missions that involve actual gameplay are far more rewarding of the player’s time and efforts.

There’s nothing wrong with another Warriors game providing a familiar experience, but all that’s dependent on this particular game being enjoyable to look at and play comes up incredibly short. At its best, Age of Calamity keeps a weak grip on 30 frames a second, and at its most visually chaotic, the game effectively becomes a slideshow. And it’s at its absolute worst when it puts you behind the controls of one of Hyrule’s Guardian Beasts, massive stone-and-metal kaiju that wreak havoc on hordes of enemies. These segments should be wicked displays of payback. Instead, they’re smudgy, indecipherable nonsense, given that the camera can’t figure out where to go, enemies are too small to stand out against the various smoke and light effects, and the explosions from destroying them tank the framerate.

Age of Calamity isn’t a game that’s likely to stay with you too long after the credits roll, even if it hurts the eyes from time to time. But Warriors games have always been there to scratch a very particular itch, and Age of Calamity still manages to deliver on that front, while also letting Legend of Zelda fans spend some quality time with some familiar faces. It’s a somewhat broken experience, but it’s scarcely a heartless or empty one.

The game was reviewed using a review code provided by Golin on November 20.

Review: Haven Is a Technicolor Tone Poem to Falling in Love in a New World