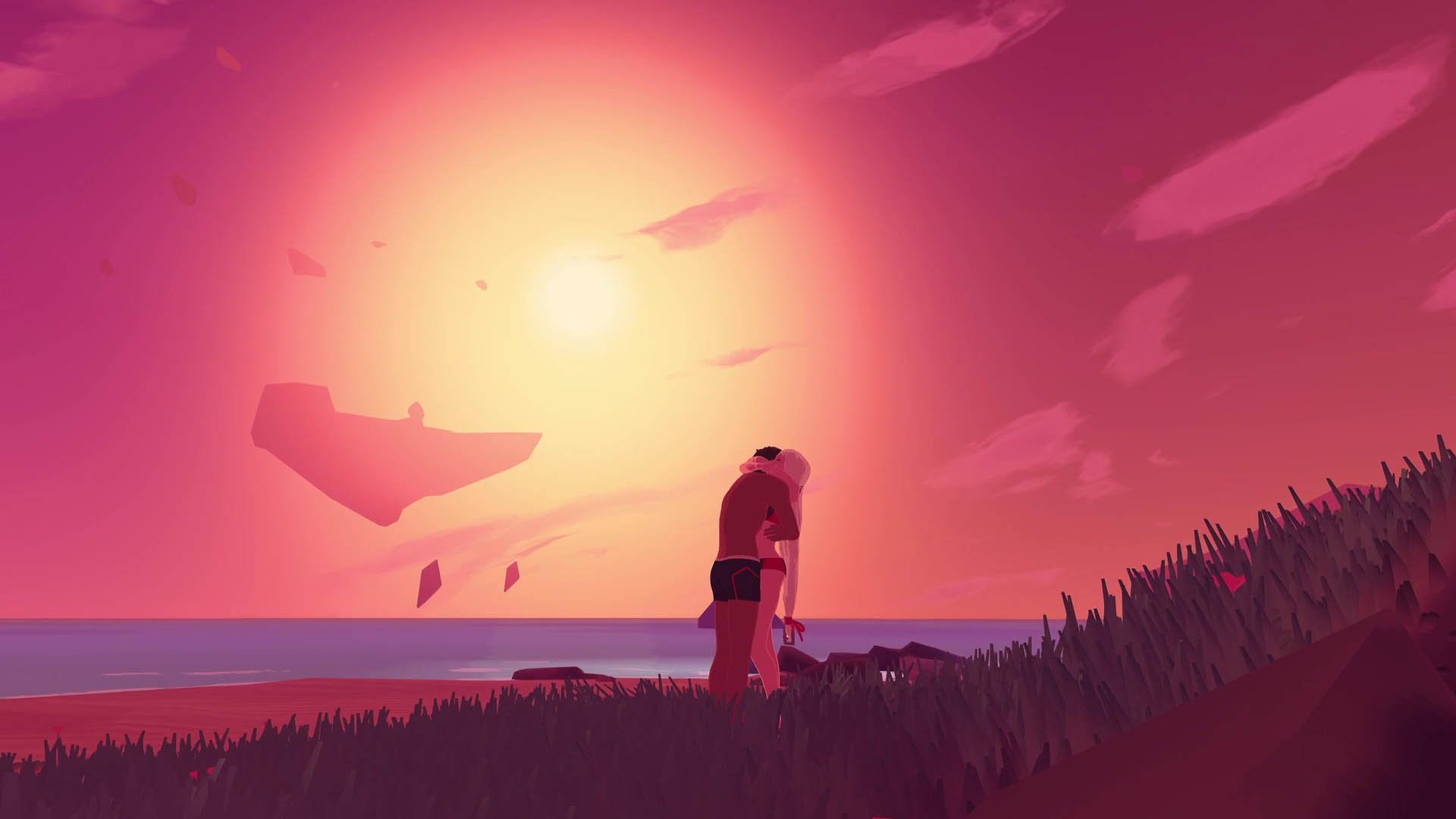 The worst thing that can be said about the Game Breakers’s Haven is that it doesn’t visually live up to its spellbinding animated intro, a sequence of achingly beautiful watercolor psychedelia and sensuality out to make you fall for the game and the young lovers at its center, Kay and Yu, even before you’ve pressed start. The bulk of Haven doesn’t reach that level of sensual audacity until a second, even sexier sequence in its end credits. Still, the bookends are only a joyous lightshow, a Technicolor tone poem about what love feels like. The real revelation is the game in between as it basks in the day-to-day joy of building and maintaining love millions of light years away from the rest of humanity.

Haven’s star-crossed lovers have managed to steal a spaceship and escape from the technocratic utopia they call home and the arranged marriages therein. They crash-land on a lush, colorful, but seemingly uninhabited planet called Source. Fast forward a few weeks and they’ve managed to figure out that one of the plants on Source is similar enough to apples to be edible, at which point your job becomes to help them find more kinds of food and materials to fix up their ship, as well as leave them with a clearer sense of where they are.

The core mechanics of Haven are all derivative of the most tired modern concepts of survival and crafting but refreshingly distilled to their essence. This is an open-world survival game that isn’t designed to take over your waking life. There’s a fast-moving day-night cycle, during which you wander around finding plants, seeds, mushrooms, and crude minerals, and while you have to make sure that Kay and Yu regularly eat, bathe, and sleep, the process isn’t beholden to the grindy nature of other games with similar systems.

It helps that traversing Source is exhilarating. Kay and Yu possess anti-gravity boots that allow them to glide angelically over the landscape, as well as ride the blue floating ethereal energy rails made of biofuel called Flow. They can ride these rails over otherwise untouchable terrain, even high into the air like an invisible roller coaster. The game exudes carefree vibes, from its lo-fi synth-wave soundtrack to the defiantly naturalistic way that it handles encounters with alien life. Haven is a sci-fi exploration game where you share space with others but don’t own it. Which is to say that the joy of exploring Source is less about the world than the company.

Haven puts us in the boots of a couple moving in together millions of miles from not just their families, but humanity itself. Kay and Yu are best friends who’ve become more than that. Here, they tap into their inner children, endlessly curious about each other and the brand new world they’ve arrived in, and both are quite literally willing to go through fire for the other. Throughout the game, the writing and voice performances are stellar, unafraid to capture the minutiae of two individuals testing all sorts of boundaries as they revel in matters of work, play, love, and lust. Haven is far from the only game to capture the dynamics of a couple so well, but it’s a rarity in terms of making coupledom such a foundational element of gameplay.

As a mechanic, love in Haven means that Kay and Yu automatically hold hands while they glide across a field. They tease and taunt each other should one of them accidentally bump into the other, and they engage in the sport of friendly competition when it comes to who first spots edible batches of seeds in an area. They will camp, cook, fall asleep side by side at rest points, getting into new, non-repeating conversations every time. The only true physical danger to them are the aliens infected by Rust, an unknown material corrupting much of Source. Confronted with that danger, the game switches into an active-time JRPG-lite mode, where success means working in concert. Kay is controlled by the d-pad, Yu by the face buttons, and the most powerful maneuvers are only accessible by the two of them charging moves in tandem. Cooking and crafting are controlled in the same way. Stand still long enough and they’ll embrace and kiss, evening out each other’s HP totals.

There’s another conflict that arises in Haven that further disrupts Kay and Yu’s bliss when their home planet’s forces get wind of their survival and their arranged mates come calling. Disagreements crop up over how to tend to their new home, and a truly ugly argument breaks out between them after a harrowing video call. And all of it feels incredibly organic, an honest take on the “better and for worse” part of a union that so many treacly romances tend to gloss over. And there’s no conflict so devastating that we’re not still reminded that we love these people and wish for their happiness in their new home. Along with being one of the most gentle and soothing games of the year, Haven is also gaming at its most compassionate.

The game was reviewed using a review code provided by the Game Bakers.

Review: Hyrule Warriors: Age of Calamity Is Addictive in Spite of a Shaky Engine