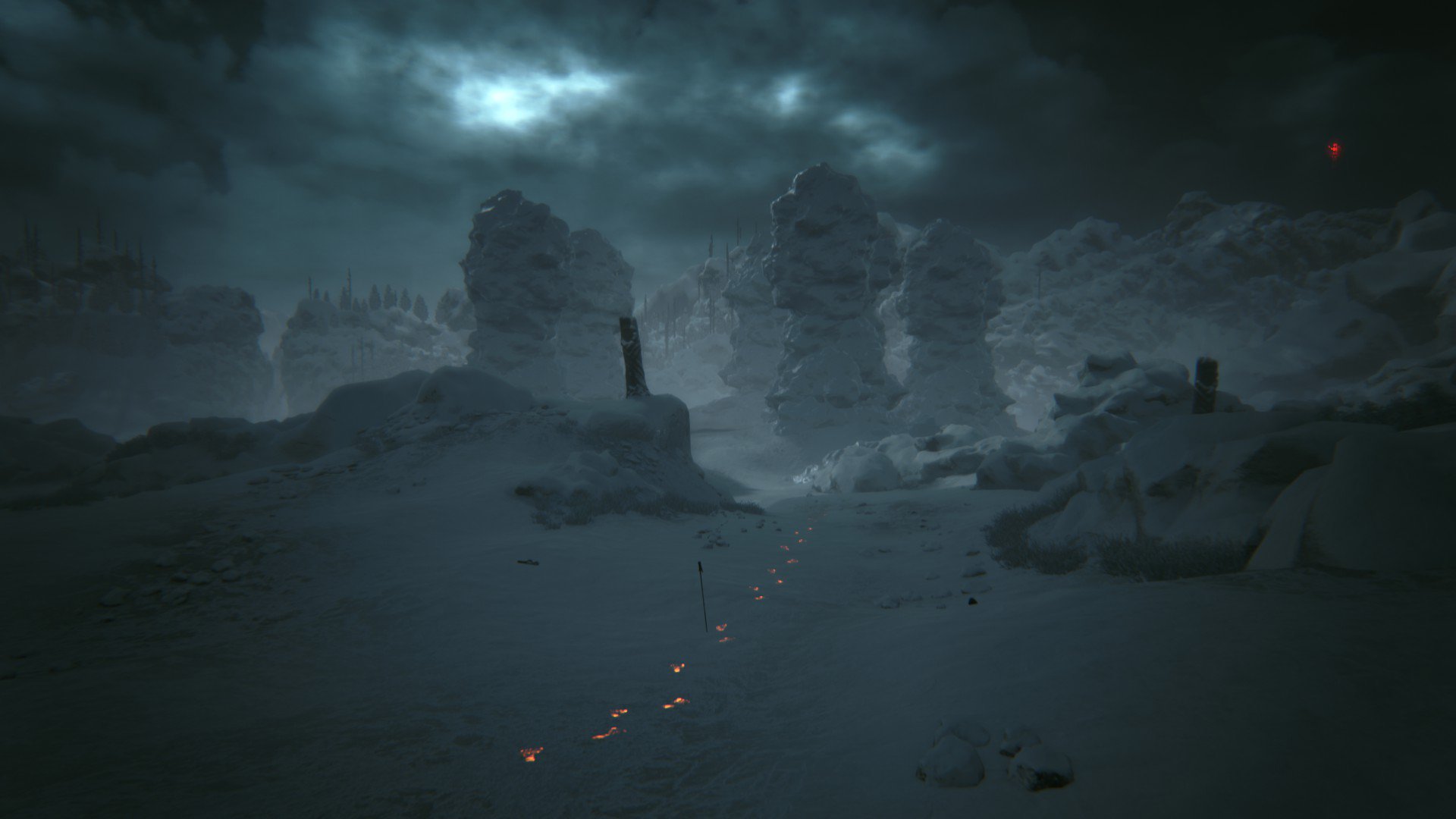 At the heart of IMGN.PRO’s indie survial horror video game Kholat is a snow-covered, mountainous wilderness area where there isn’t much to do other than to walk, look, and listen. There are semi-transparent evil spirits roaming about, but there’s no way to fight them. If one catches wind of your presence, you can’t fend it off with, say, frantic button-mashing. All you can do is let go. Death in a video game is usually the result of failed, often anxious attempts to react to a threat quickly enough, but in this quiet horror game, your demise against the evil spirits is the product of your inherent helplessness. Kholat encourages profound contemplation, specifically about living with death. Keep your distance from the coal-red footprints of the arcane beasts and you may even find peace in your solitary journey.

Based on the Dyatlov Pass incident, Kholat has you trace the steps of a group of nine college students who went missing on a mountain in Russia’s northern Ural region. The nature of the students’ demise is discovered via found journal entries and smartly ambiguous voiceover, and the game’s three-act structure develops the mystery—and that of the player-character’s identity—at a precise pace. But the sparse bits of text struggle to develop the character of the victims and the others you find records of, and as everyone begins to blend into one another, you may be left craving for more depth and distinction. But the story is told and concluded coherently enough. Besides, Kholat’s driving force isn’t its plot, but the exploration of its spacious world.

After a short walk through a train yard and into a whiteout, the player is dropped into the open backcountry, given a map and compass (which you actually have to use, as your location isn’t magically marked on the in-game map) and asked to navigate to a list of coordinates. At each spot, a distinct micro level—a scorched forest, a cantilevered cabin, a mountaintop altar—is woven seamlessly into the macro environment, with an artifact from the lost expedition housed within. Particularly memorable is a small cave, given how its intricate passages are multileveled and twist around themselves.

Kholat’s open world feels like it’s always existed, as if its form had set up as a drying mold and then the points of interest were placed in the openings and connecting paths within the environment’s valleys and clefts. All areas feel like natural extensions of one another, and this sense of cohesive openness is most awe-inspiringly articulated when, at the game world’s highest peak, you’re able to look down and literally see where your quest started and all the trails that took you from there to your present location.

Also apparent at this lookout is Kholat’s geographic beauty. In the distance, the land formations are notable for their rich and realistic textures. The opening scene looks so realistic (the frosted railcar paneling; the afternoon light of a clear, alpine sky) that players might confuse it for a cutscene and not even bother to move. Soon after, the wind fills the air with dusty, icy snow, and streaks of sunlight between pine trees are made visible in the shimmering cloud. And whether breathing or howling, the voice of the wind can always be heard, rising and falling throughout. It’s a soothing constant, reminding us to slow down, stop, and take it all in. It’s yet another embellishment, a small one, of the overall effect of a world that transports us to another place.