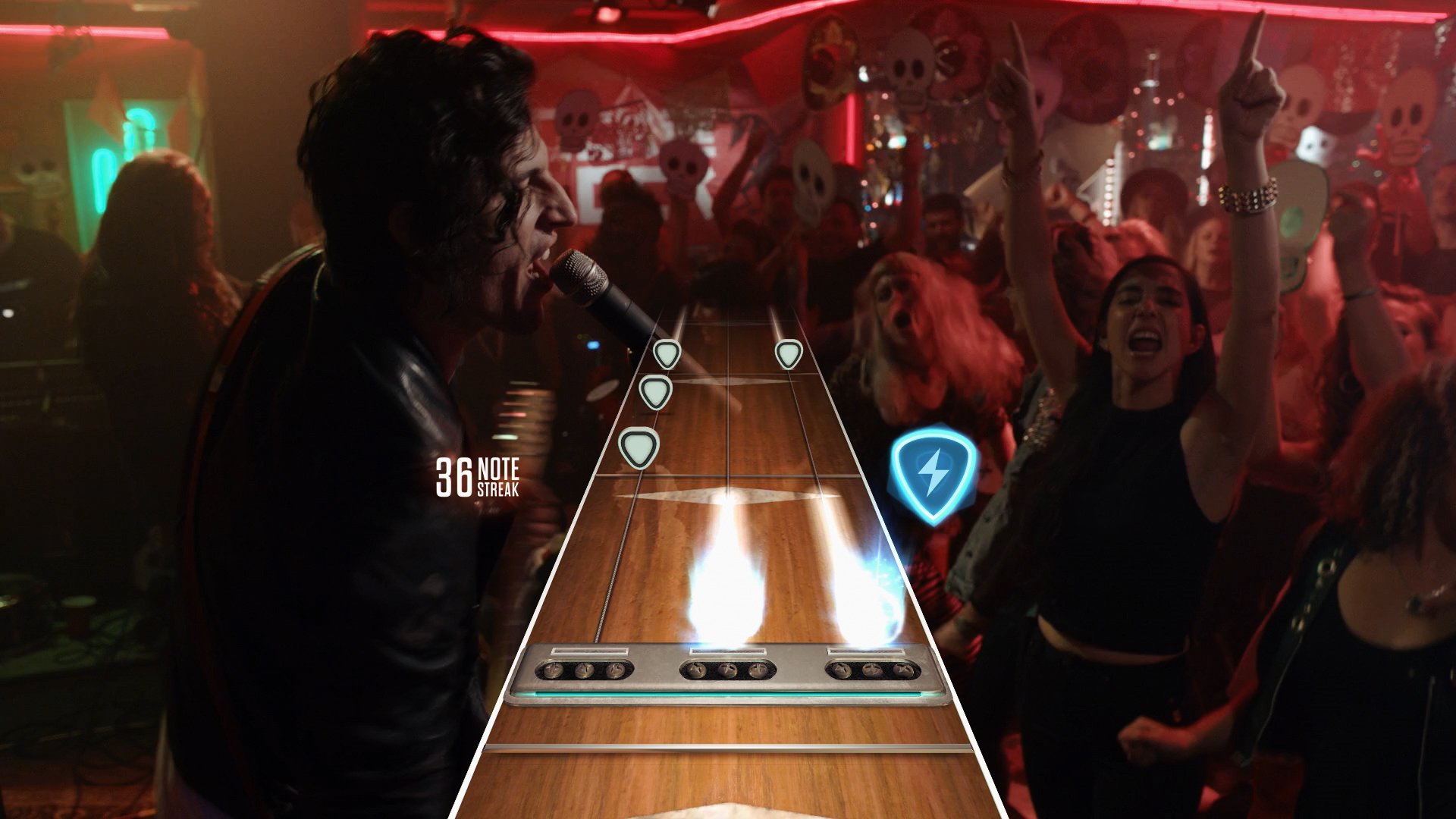 Gil Scott-Heron had it wrong, at least when it came to music: The revolution most certainly will be televised. The new GHTV mode that makes up the majority of Guitar Hero Live isn’t just a remolding of how we think about plastic guitars, but how audiences listen to music, and it takes its cues both from streaming giants like Pandora and microtransaction-filled free-to-play apps. It’s essentially Total Request Live for the Me generation, with players playing along to classic and contemporary music videos (or concert footage).

Songs stream on two channels and the genre changes every half-hour or so, from “Metal Picks” to “Indie Influences” and “Rock Workout,” just to name a few. Those who don’t want to go with the flow, or are hosting a party, can pay a $5.99 licensing fee to unlock the entire catalogue of already over 200 songs for 24 hours, or can use the Plays they’ve earned to choose specific songs to practice. It’s a brilliant way both to expose players to new music and to part them from their money, but the quality of the experience and presentation ensures that everyone comes out feeling like a winner.

Guitar Hero Live’s other mode, GH Live, is also polished to perfection. As opposed to the pre-recorded music videos and streaming offered in the GHTV mode, GH Live focuses on 46 on-disc tracks. These aren’t meant to be the cream of the crop (Green Day’s represented here by “Nuclear Family,” while “American Idiot” shows up on GHTV), but an exceedingly varied bunch of rock songs from classics like the Who’s “Won’t Get Fooled Again” and the Rolling Stones’ “Paint It Black” to the playful punk of Blink-182, the funk-rock of Jack White’s “Lazaretto,” the peppy pop of Katy Perry’s “Waking Up in Vegas,” and a few take-it-or-leave-it surprises like Eminem’s “Bezerk” and Skrillex’s “Bangarang.” But that carefully culled set of songs is paired with full-motion video of fictional bands performing in real life, with the camera’s perspective meant to represent the viewpoint of the lead guitarist (i.e., the player).

The effect should be as cheesy as full-motion video games usually are (think back to the light-gun shooters most recently parodied by Troma in The Wavy Tube Man Chronicles), but it succeeds within the larger-than-life context of Guitar Hero Live. These venues, after all, are places where the player’s avatar might at any moment decide to crowd-surf among the obsessed, head-thrashing, or love-struck fans, or where a particularly wasted fan might run on stage and begin to strum his leg before being chased off by security.

While no amount of verisimilitude can distract from the clicking of a plastic strum bar, the earnest enthusiasm of the presentation can absolutely drown it out. This is as “live” as it’s going to get for most players: artificially walking through the backstage area, being “handed” a guitar by a trusty roadie, and then playing a three-to-five song set. There isn’t even a distracting score in the GH Live mode (GHTV offers an asynchronous leaderboard): If players mess up, the video reflects it by swapping between cheering and booing fans with the smoothness of an optometrist’s refraction test.

FreeStyleGames hasn’t just reimagined Guitar Hero from the ground up, but also improved on the base component: the guitar peripheral. (This isn’t as surprising as it sounds, considering that they found a way to make spinning a platter satisfying and compelling in DJ Hero.) Instead of using Harmonix’s tried-and-true five-fret method, the guitar now has a two-by-three matrix of frets, separated into black “top” notes and white “bottom” notes.

The binary color scheme is intentional, too, since it denotes simplicity while not detracting from what’s actually a fairly complex system to master. With the inclusion of barre chords (the white and black frets held down together) and open chords (strumming without holding a fret), there are seven different types of notes to hit, and a wide variety of combinations. Most critically, this structure feels closer to playing an actual guitar, with the emphasis on positioning and rhythm rather than one’s ability to splay their fingers wide.

Between the GH Live and GHTV components, Guitar Hero Live effectively crafts the illusion of being in and of the moment. This zeitgeist-y medley of angst and ambition is an absolute dream to play, and with over 200 songs already streaming, one that most players will never have to wake up from.

Review: Dragon Quest Heroes: The World Tree’s Woe and the Blight Below