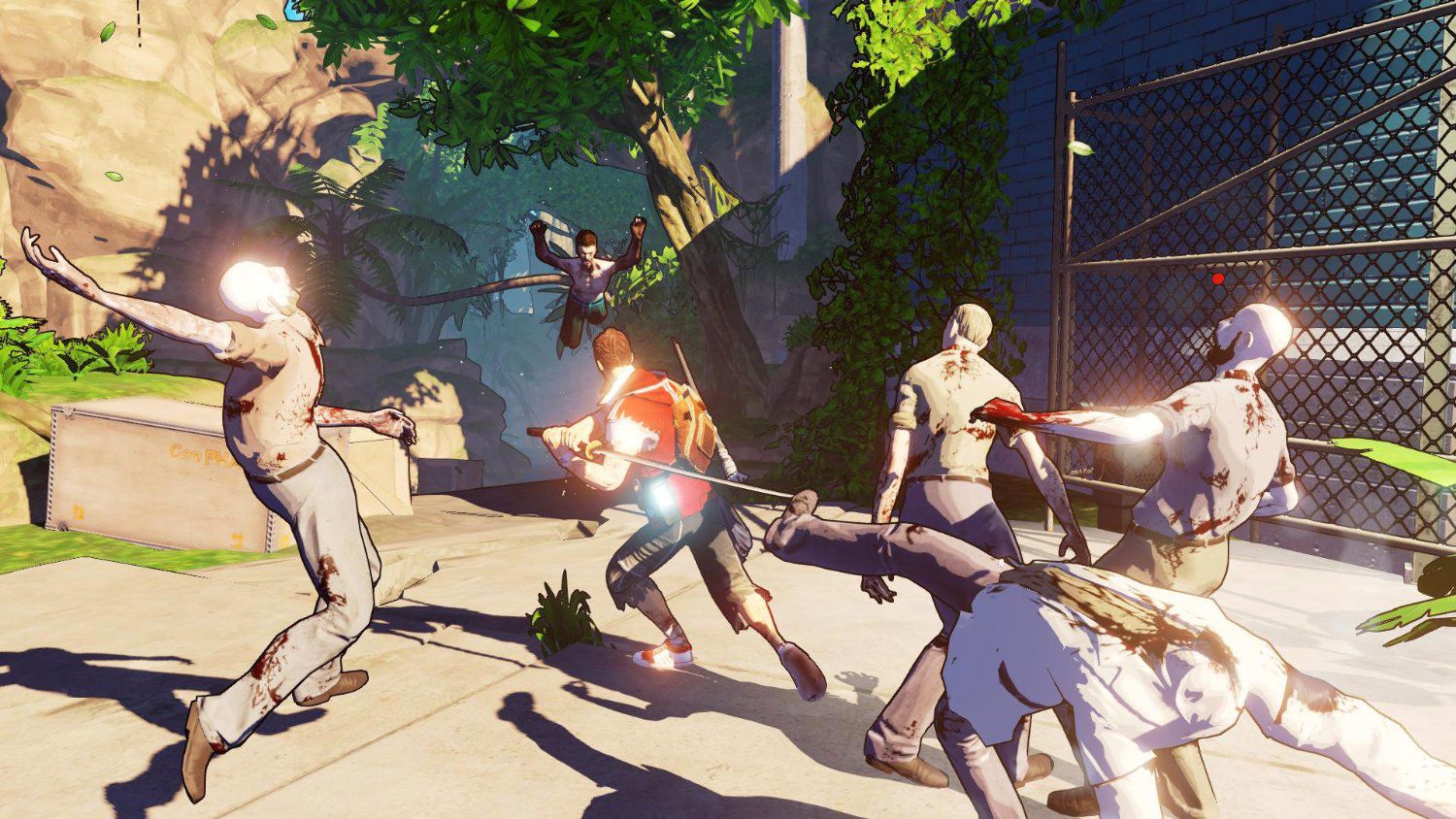 Escape Dead Island begins with a short, mysterious vignette set within a research facility. An unchecked tissue-regeneration experiment has gone bad and, following a zombie outbreak, super spy Charon has been sent in to investigate. Right away, the game triggers a series of disappointing realizations. Charon converses with a remote agent over his radio, and soon you’re moving him through blood-splattered corridors and trashed, abandoned rooms, but you’re mainly thinking about how the floor layouts are so wonky and oddly proportioned. The comic-book-styled art is supposed to look directed, but it just looks inexpensive on the flat, bland walls. There are some zombies strewn about the foggy rooms, but slashing them with Charon’s katana can’t be performed consistently or with any satisfying tactility. It soon becomes clear that the stealth mechanics provide the most traceable feedback, and to avoid frustration, it’s usually best to remain hidden and execute unsuspecting zombies from behind. This goes on for a bit. Then a beast spies Charon, the screen goes black, and the game jumps forward six months to three friends on a boat.

Rookie photojournalist Cliff Calo heard whispers of the disaster and sought out the island of Narapela in hopes of capturing the story of the island’s downfall to impress his father. The bright skies, white yacht, and blue water wear the comic art more effortlessly than the shadowy GeoPharm facility. The conversations between Cliff and his two friends, however, don’t rise above sarcastic, stunted banter; one of Cliff’s highlights include, “The douche abides.”

You soon step foot on Narapela, and you begin to take pictures of equipment left behind by the research corporation, and you may wonder excitedly, “Could photojournalism actually be a mechanic in this game?” But, disappointingly, such hopeful thoughts are short-lived. It turns out Escape Dead Island isn’t about documenting Geopharm’s unethical research practices, the consequences of the corporation’s heinous mistake, or even the story of Charon’s fate. This is a zombie game, and it immediately makes sure that you know it’s nothing more than that. Zombies pour out of the jungle and, just like that, Cliff puts away the camera and, channeling his inner Charon, picks up an axe. After all, Cliff isn’t view-finding on the game’s box art; he’s brandishing a bloodied hand weapon. I guess I should have known better.

Out of nowhere, Cliff’s yacht explodes for no reason. Logistically, escaping a “dead island” does require being trapped in the first place, but this odd event can only be described as bizarre. Uncannily, almost every plot turn that follows is just as inexplicable. In the most cliché of reoccurring offenses, Cliff “wakes” from the chaos as if it all had only been a nightmare. And after the third or fourth awakening, Cliff encounters a zombie version of himself who, before their ultimate showdown, taunts stupidly, “I’m you, dummy.” The developer, Fatshark, attempts to justify the non sequiturs with a psychological narrative that distorts reality from the perspective of Cliff’s mind, which for some reason is growing increasingly unstable, but supposed “twists” like these only become more and more meaningless as his escape progresses.

But when you get right down to exploring Narapela, you may find that it’s a nice, compact little world. Its cohesive web of beaches, caves, cliffside trails, and summits often inspires wonder, and compels you to want to explore more. There’s an airfield out in the jungle, a dock in the cove, and a helipad on one of the peaks. These facilities, and others, are smartly woven into the terrain, and there’s no loading between interiors and exteriors. The island isn’t truly open or freely roamable (you have to stick to the paths the developer gives you), but the smooth transitions between the man-made and the natural go a long way toward making it feel like a real place.

This pleasure is contrasted by the frustration that comes when Cliff is finally transported into what seems like his own consciousness. The unreal level design of floating and shifting mind shards is so generic, and the inexhaustible stream of shadow zombies is so numbing, that you just can’t wait for the fever dream, and the game, to be over. A game world that feels like a real place isn’t necessarily the end all be all, but in this game’s case, it helps you feel welcome. It’s a blessing that the island of Escape Dead Island conveys this effect, because playing the game itself often makes you wish you weren’t.

Review: Lara Croft and the Temple of Osiris