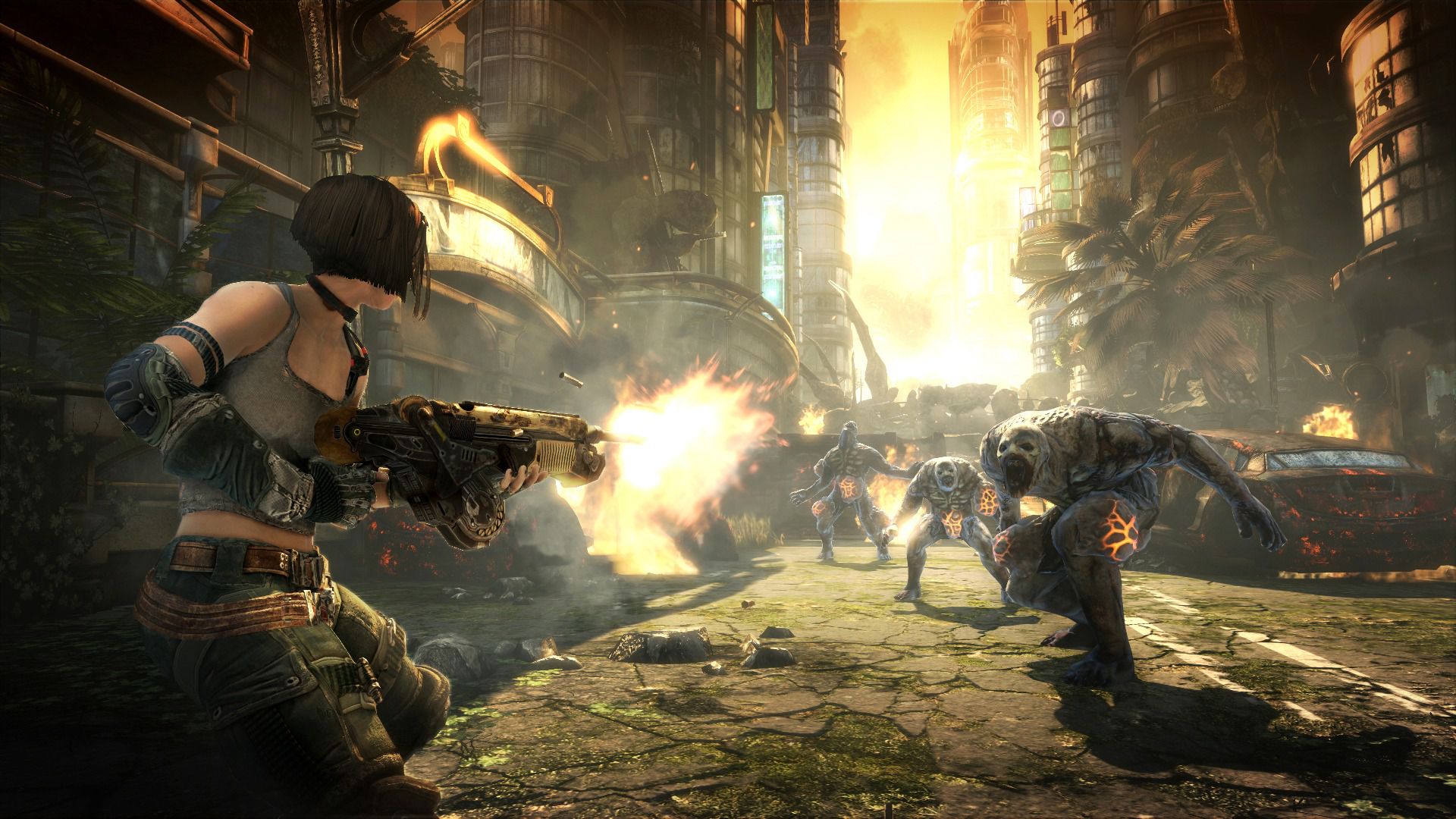 Weeks before its release, the Epic Games/People Can Fly collaboration Bulletstorm was making waves in the media. Much ado was made over the gameâ€™s treatment by Fox News, who, through the hysterical lack of logic exhibited by an insipid and later discredited “expert,” managed to equate the game with sexual assault. (Nothing to see here, just Foxâ€™s regular uninformed approach to journalism.) Much more interesting was Bulletstormâ€™s inspired advertising campaign, poking fun at the perceived pretentiousness and seriousness of Haloâ€™s “Believe” campaign, gloriously parodied in a miniature “sausage-fest” diorama featuring real vomit and “bulletpoint” interviews with figureheads like Cliffy B proclaiming how proud their grandparents would be that they were making a game that rewards players for shooting a man in the ass.

Throughout the marketing, Bulletstorm was positioned as a modern answer to Duke Nukem 3D, a juvenile exercise in offensive, nonchalant, gore-driven excess, doing away with the weight of popular modern shooters like the recent Call of Duty entries. Epic Games even went so far as to release an ingenious downloadable parody game, Duty Calls, lampooning series tropes alongside other modern FPS conventions. The sad irony of this is that what Bulletstormâ€™s underwhelming campaign most resembles is both Modern Warfare games, from the expository flashbacks to the heavy-handed plot to the passionate character monologues to the terrible QTE-crawling-toward-my-gun ending, clashing with its lowbrow style and gameplay to be something tonally disconnected and frustratingly asinine.

Taking a page or 10 from Joss Whedonâ€™s Firefly, Bulletstormâ€™s far-flung future finds space pirate Grayson Hunt (Steve Blum as Kurt Russell) and his drunken gang of ex-confederate-Black-Ops making a misguided, liquor-fueled attack on their evil ex-Commanding Officer, General Serrano, and his crew of 700, resulting in basically everyoneâ€™s death as both forces crash-land on the planet Stygia. Hunt and his only surviving crewmate, Ishi Sato (Andrew Kashino, part-machine and hilariously channeling GIR Goes Crazy and Stuff) make their way across the former-resort planet, now overrun with mutants, criminals, monsters, and weak plotting to find Serrano and an escape route off the rock. Itâ€™s a first-person shooter featuring just under a dozen different inventive weapons including the Penetrator (a gun that fires sizeable rocket-propelled drills, impaling and rocketing their spinning victims into walls/obstacles/others), the Boneduster (a four-barrel shotgun that liquifies the top or bottom halves of enemies), an electronic lasso that can be used to pull enemies or objects skyward (in slow motion for some reason), and a riff on Dukeâ€™s Mighty Boot, which kicks enemies and objects into the air (also in slow motion). These work hand-in-hand with a combo/achievement system called Skillshots, in which Pavlovâ€™s bell rings reward for pulling off a particularly creative kill (e.g. “Assplosion” for shooting a particular enemy in the rear end, “Voodoo Doll” for impaling an enemy on spikes) or a combo of murders (“Gang Bang” for multiple enemies killed via explosive bolo) with an appropriate score and title. Points gained from skillshots are exchanged for upgrades and ammunition, with the game keeping a log of everything the player has achieved, such as shots to the throat.

Bulletstorm is a very colorful game, subverting the gray tones of Epicâ€™s other series Gears of War with bright variegated environments, a unique but unexceptional mishmash of New Mombasa, Isla Nublar, and Jacinto (late-in-the-game sequences in particular feel borrowed from Gears 2, with the infamous horizontal lift wreckage making repeated cameos). Ditto the colorful enemies, weapons, and language (never before have I heard the phrase “dick-tits” uttered with such gravity and tenor) that gives the game its distinct personality, but that personality just doesnâ€™t go far enough. Bulletstorm is half-cocked throughout: Despite having some inspired weapons, the game simply doesnâ€™t have enough variation to last its play time; likewise, its Skillshots system is limited so that most are repeated ad nauseam through to the crappy end. Its dialogue is not consistent, with the weird and amusing phallic-heavy profanity infrequent and unsatisfying, and sad linearity halts any exploration in the otherwise competently designed levels. (Invisible walls, anyone?) Worse, the contrived plot wants to give mass-murdering protagonist Hunt sympathy and redemption despite the fact that itâ€™s hard to feel for him after his drunk tantrum offs his crewmates and hundreds of others at the offset and even harder to find weight in the deaths of a thousand faceless characters after spending hours being rewarded for blasting them in the ass (“Rear Entry”: 50 points).

Bulletstormâ€™s multiplayer is another missed opportunity, lacking campaign co-op despite the fact that the entire game features an AI partner as well as a potentially refreshing death match that utilizes the nifty tools Bulletstorm has at its disposal. Instead, the only offering is Anarchy, a wave-based team survival mode that subverts Gears of Warâ€™s Horde mode with a score threshold that must be met before proceeding to the next wave. Problem is, in addition to the trouble of finding four people prepared to work together as a team, the gameâ€™s scoring is occasionally busted, not acknowledging complicated team Skillshots and punishing successful teams. I give it a week before the servers are completely empty.

And so it goes that Bulletstorm is an unfocused and repetitive mess, never completely succeeding in anything it attemptsâ€”excess without abundance, gravitas without weight. The fun to be had with it doesnâ€™t run the entire campaign, nor does it go far enough to really make it distinctive from other shooters in any regard. Thereâ€™s also some irritating technical hitches, including late-game slowdown when the screen is crowded, subtitle spelling mistakes, and the odd crash on the 360 version; otherwise, all versions are identical, aside from the PC version looking slightly better and smoother (as long as youâ€™re prepared to deal with the agony of Games for Windows Live). Letâ€™s hope the Dukeâ€™s imminent return delivers where Bulletstorm fails.