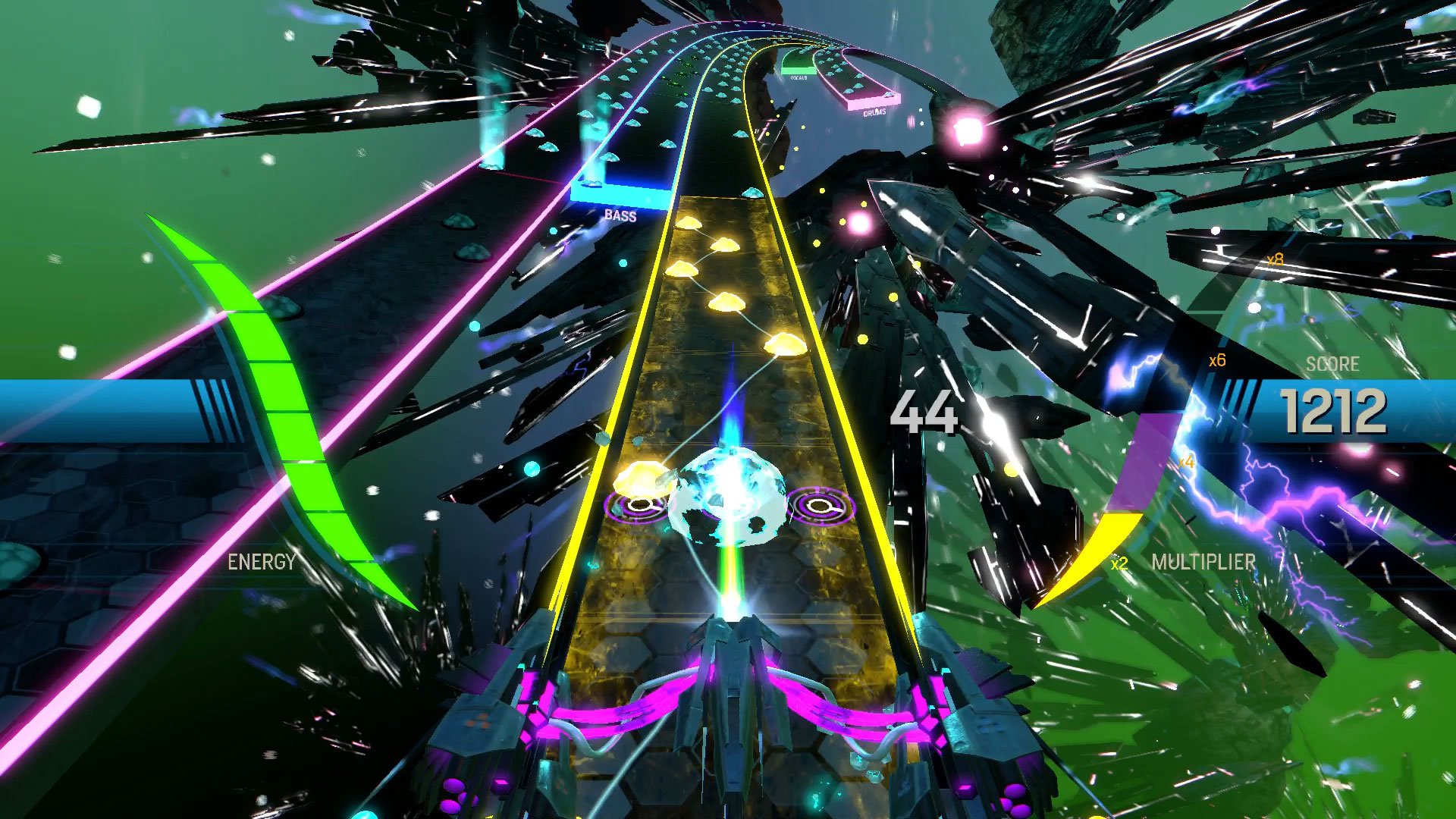 The 2016 revival of Harmonix Music Systems’s 2003 cult classic Amplitude is a rhythm game driven by the synesthetic idea of physically interacting with sound. That specificity is what helps to elevate the game from a nostalgic remix—like 2012’s uninspired and derivative Rock Band Blitz—to a risk-taking sequel, one that evokes memorable, experimental music-based games like Rez. In other words, all this musicality has meaning, as an original 15-track concept album makes up the spine of the single-player campaign. Players aren’t just navigating a neon nanoblaster through a swooping and swirling rollercoaster of sound; they’re attempting to restore the neural pathways of a patient who’s succumbed to sonic stressors.

More ambitious than the average fast-twitch rhythm game, Amplitude forgoes fancy peripherals for streamlined gameplay, making the story—the lyrics, at least—a part of the soundscape. (Those who hated the disorienting interstitial lightshow of 2001: A Space Odyssey might as well check out now.) The psychedelically colored brain that’s pulsing to the electronica beat makes sense for a song entitled “Perfect Brain,” and the garbled vocal track and bizarre background match the aphasic patient in “Decode Me.” By game’s end, “Dalatecht” (and “Wayfarer,” if you’re precise enough to unlock it), visual distortions have filled the screen to such a degree that players almost have to feel their way through the near-invisible note-charts. The gameplay is entirely—almost meditatively, or trance-like—at one with the music.

Even the “nanotech” power-ups reflect the game’s music-as-therapy premise, with players gaining the ability to “cleanse” an entire sequence at once, or to “sedate” (or slow) down a track. While it’s true that Amplitude is still the same game at heart, in which players swap between purple percussion tracks and blue bass lines, syncing button “blasts” to the indicated on-screen beats, all of these acoustic accouterments make the experience feel grander than the sum of its parts. Given this playable paean to sound, it’s no surprise to find bonus tracks contributed by composures behind other musically influenced indie titles (Crypt of the Necrodancer, Transistor), or to see many of the contributors to 2001’s Frequency (like Freezepop, Kodomo, and Symbion Project) return with new songs.

Amplitude is so obviously a labor of love that it’s difficult to criticize it, especially given all of the ways in which Harmonix has addressed the concerns for fans who funded them on Kickstarter. (For instance, there’s an unlockable “FreQ Mode,” in which players can swap out Amplitude’s linear layout of tracks for the three-dimensional tunnel used in 2001’s Frequency.) However, the massive amount of polish that went into the campaign makes the lack of funding for other features all the more apparent.

The customization of player avatars and remixing of tracks found in earlier titles is conspicuously absent here, and only a flat and difficult-to-maneuver local version of the multiplayer remains. Harmonix isn’t tone deaf, as Rock Band 4 addressed a variety of missing features with post-release patches, but that doesn’t make the title’s current long-term life any less threadbare. That said, there was a time when a concept album alone would’ve been worth a meager $20, and Amplitude comes with an entire game included: Only a dilettante could really complain about that.