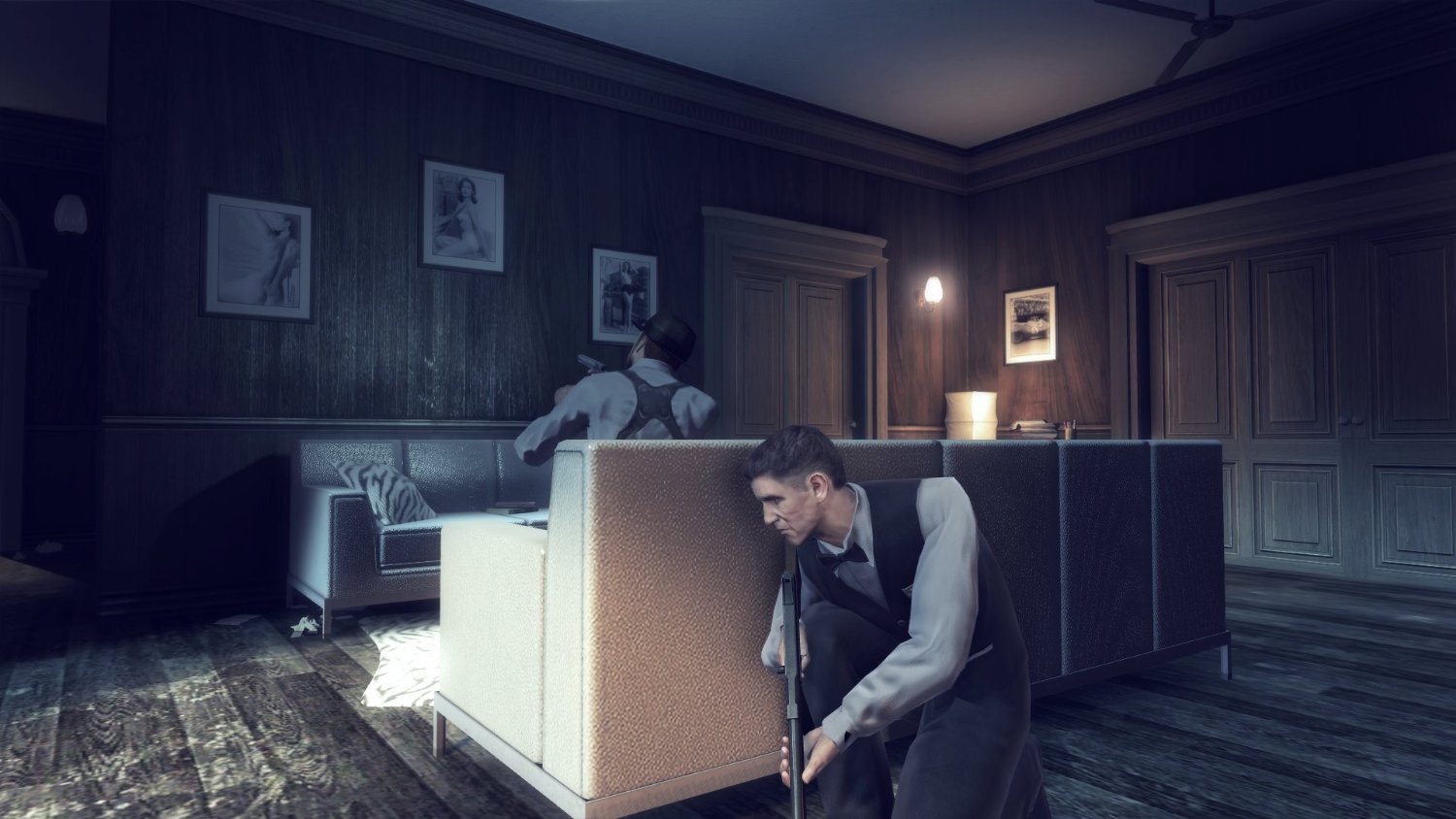 In the Cold War setting of Alekhine’s Gun, players assume the role of a Russian agent working with the C.I.A. to uncover suspected double agents within U.S. ranks. The game borrows its name from a chess formation involving the vertical alignment of both rooks in front of the queen—the implication being that your playable character, Agent Alekhine, orchestrates similarly deadly traps in the field. After all, why simply strangle the target in his dressing room when you can rig his spare guitar amplifier to overload, don an unsuspecting roadie’s get-up, and swap out the amp on stage right before he turns it up to 11? The inventiveness of the possibilities may charm, but the game’s 11 levels of concerted assassination and disguise play a lot like Hitman, and with a weaker execution of its borrowed design at that.

First and foremost are the particularly unnuanced disguise mechanics. If you’re not wearing a disguise, you’ll be instantly shot on sight—and if you do wear one, enemies will allow almost any liberty. Many guards warn that areas are restricted, but breaching a location’s supposed security while wearing an unsuitable disguise (say, a cook entering the mob boss’s office) incites little more than a raised eyebrow. Even on the game’s hard difficulty setting the guards are no more suspicious of your out-of-place garbs. Perversely, the highest difficulty completely prohibits disguises, an odd design choice that makes Alekhine’s Gun basically unplayable.

The levels start out rather promising in their variety and layout—with the exception of a few architectural designs, like a stairway leading to a dead-end basement hallway housing nothing more than a breaker box. The coastal level is particularly cohesive; its lighthouse, docked naval ships, and the tent encampments just off the beach artfully and seamlessly flow into one another. Later in the game, though, developer Maximum Games strains for a sense of intensity and significance throughout maximum-security secret bunkers chock-full of monotonous, if inevitable, stainless-steel corridors and concrete tunnels. The dull structures promote similarly cold up-close-and-personal stranglings that stand in sharp contrast to the grandiose assassinations that earlier levels allow one to set up.

The outdoor levels are well designed, but they aren’t easy on the eyes. Fine details, like leaves and brush, pixelate terribly, especially with in-game backlight from the sun, and the ground textures are overloaded with minutiae that often makes it difficult to judge an object’s place in the game world. The graphics of some games can be described as cel-shaded, illustrative, or retro, but Alekhine’s Gun doesn’t really have a style other than “high-resolution.” It’s as if Maximum thought that upping the resolution of the in-game surfaces would be enough to create a distinctive look on its own. The game’s textures look realistic in the photographic sense, but the brute-force technique fails to uphold any sort of aesthetic consistency. Besides, the rendering engine can’t keep up, chugging to a crawl with too many objects on screen.

Alekhine’s Gun may be a less refined version of a Hitman-style game, but the delivery of its rote narrative is sometimes innovative. The bulk of the story is told between levels with painterly stills that fade from one to the next. In one instance, a fist fight breaks out between two old enemies, but all we see is their haggard faces and limp, exhausted limbs, and all we hear is their heavy breathing, thudding fists, and the clattering of the office paraphernalia in their wake. The few brushed images of the grappling brutes are striking for leaving plenty to the imagination. Admittedly, the decision to use stills rather than cutscenes, which can distract with overwrought spectacle, does seem budgetary on some level, but the restrained format does free us to focus on the primal humanity of the encounter. It’s a thoughtful, albeit maybe accidental, touch to an otherwise run-of-the-mill experience.