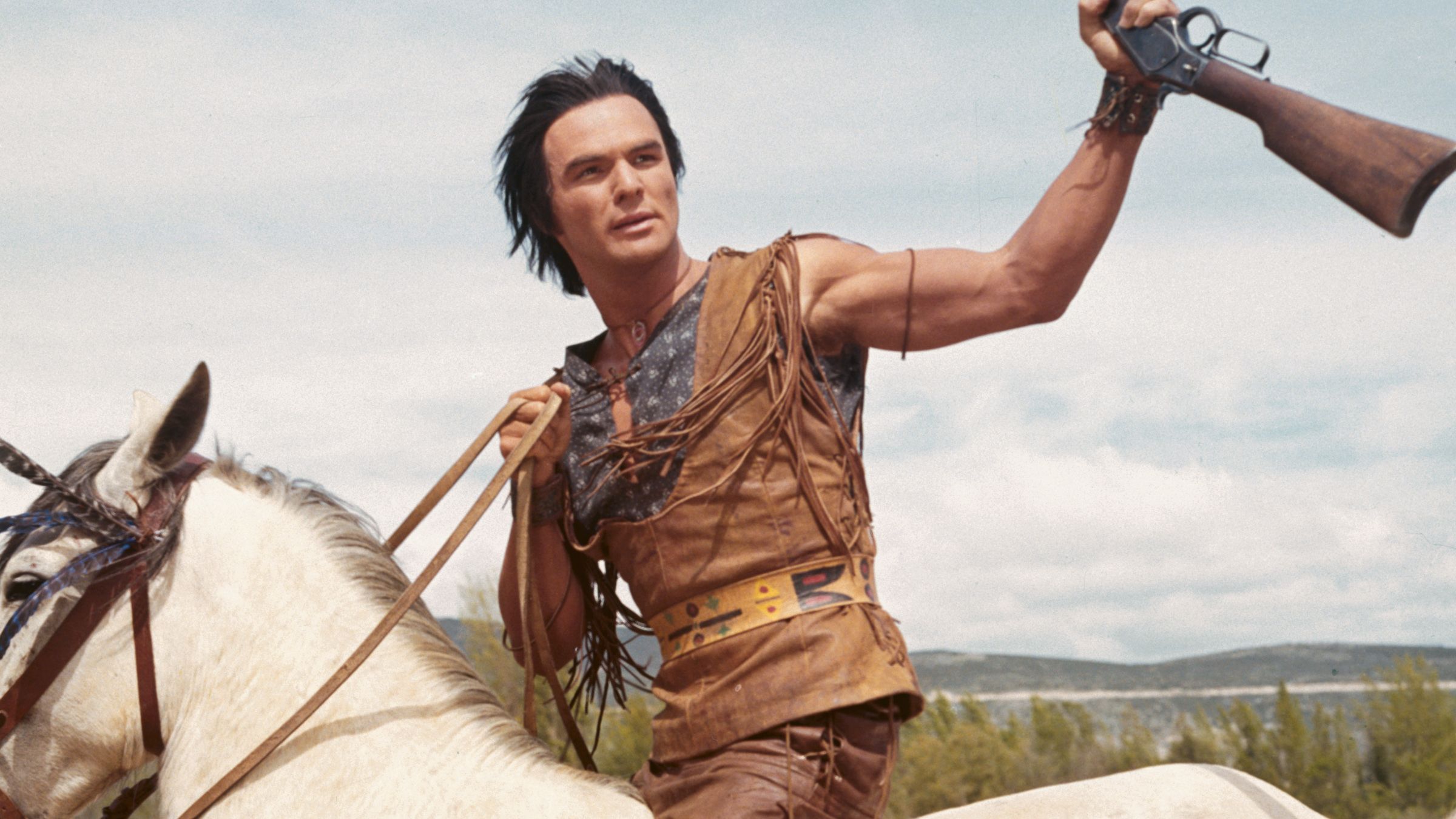 Second only to Leone, Sergio Corbucci is the king of the spaghetti western. In the same years that his two most successful films—Django and The Big Silence—respectively came out, Corbucci made Navajo Joe and The Mercenary, which New Yorkers have the privilege of seeing in their Techniscope glory thanks to “William Lustig Presents,” an annual showcase of overlooked genre gems at Anthology Film Archives. B-sides though they may be, Navajo Joe and The Mercenary both bring on euphoria as assuredly as hit singles.

On the other hand, westerns are as gritty as pop music is sugar-sweet, and Corbucci’s, which celebrate violence even more so than sex or money, are no exception. Navajo Joe is such an overt ode to blood-spilling that the pre-titles sequence features the grisliest opening sight gag imaginable: A bandit on horseback shoots the title character’s wife, then rides off with not just her jewelry, but her scalp too.

After the titles have rolled, we learn that this bandit leader, Duncan (Aldo Sambrell), has been collecting Native Americans’ scalps as if for sport, to curry favor with the sheriff of Esperanza. It sure is stranger than fiction: Once upon a time, the U.S. government doled out “scalp bounties” to such ruthless vigilantes. At this point in the film, though, the sheriff tells Duncan he’s taken the initiative too far, that killing innocent women and children is evil. From here on out, the man is persona non grata in Esperanza. After initially rejecting Navajo Joe’s (Burt Reynolds) offer to protect them from Duncan, the people of Esperanza wisely decide to enlist Joe in singlehandedly taking on Duncan’s gang of bandits.

The ass-kicking that ensues affords Reynolds an incredibly dynamic starring role. He and his horse routinely fly over rocks and rivers to catch Duncan and his band by surprise. Corbucci masterfully frames these moments when Joe sneaks up on the bandits, as in this shot where Corbucci zooms out from the bandits in the pit of a valley to reveal Joe up above on horseback, poised to shoot them down:

Despite how well Corbucci’s kinetic camerawork and Reynolds’s energetic performance synergize, Reynolds reputedly resented working with Corbucci. The story goes that he only signed on to the project because he thought it would be by Sergio Leone. When he couldn’t get out of his contract, he resorted to joking throughout the shoot that he was with the “wrong Sergio.” After the film was released, Reynolds called it “so awful, it was shown only in prisons and airplanes because nobody could leave.”

Maybe Burt’s right and the initial reception of the film was hostile, but the film has earned a bevy of admirers in the ensuing decades. Both Alexander Payne and Quentin Tarantino are such big fans of Ennio Morricone’s rousing score for the film that they quoted sections of it in their respective films, Election and Kill Bill: Vol. 2. Furthermore, Navajo Joe blazed the trail for films that depicted the Old West from at least partially the Native American point of view. It wasn’t until a few years later, with revisionist westerns such as Little Big Man and Ulzana’s Raid, that Hollywood caught on and started featuring sympathetic Native American characters in starring roles. Above all, though, Navajo Joe stands out for its narrative economy and visual extravagance. Nearly every shot—from the close-ups teeming with rage to the meticulously composed masters—is eye candy. The film thus feels like a feature-length trailer, a quality it shares with The Mercenary.

The Mercenary also features cruelty as pervasively as Navajo Joe. Whereas even the titular hero is mistreated in Navajo Joe, though, The Mercenary is essentially a hopeful film about an unlikely pair of revolutionaries, Paco (Tony Musante), a Mexican peasant, and Sergei Kowalski (Franco Nero), a Polish mercenary. Early in the film, Sergei crosses paths with the pathological Curly (Jack Palance), whose mission it is to stop Sergei from helping some Mexicans smuggle silver across the border. Right after figuring out their operation, Curly kills the Mexicans, the Garcia brothers.

United by a common enemy, Sergei and Paco team up not only to wreak vengeance on Curly, but also to pillage villages they pass along the way and, later, to start a revolution.

Although the revolutionary spirit of the film secures it a safe spot in the Zapata western sub-genre, the running joke is that Paco hasn’t got a clue what a revolution is. After his love interest, Columba (Giovanna Ralli), says to him, “They’ve mistaken you for Simon Bolivar,” one night Paco asks Sergei who Bolivar is and what it means to start a revolution. Sergei removes the sheet from Paco’s bed to reveal Columba asleep next to him, face down and naked, and explains the concept of revolution by analogizing her behind to the poor (“the bottom” of society), her head to the rich, and her smooth back to the difficulty revolutions face in overcoming class disparities.

Adding to the zaniness of this sleazy scene, and another equally startling one in which Paco goes flying out a window into a muddy, dung-drenched pig sty, the film sparkles with moments in which a gun shot sets into motion an elaborate camera movement which in turn triggers a symphonic shootout. See below, in which Corbucci zooms out from a medium shot of the man by the shack to the trumpeter, who sounds the start of a showdown:

While specific, well-choreographed scenes like the shootout above and Sergei’s suggestive diagram for revolution are blasts, they’d be nothing without the human dimension that the eccentric cast of characters brings to the table. Palance stands out for his villainous turn as Curly, who turns a relatively trite climax into near-Shakespearean drama. When Curly finds himself up against Paco, now a face-painted, circus-freak torero, for a final showdown in an abandoned bullring, he looks as much like a clown as Paco. The black curls that dangle over his forehead are childish, his dress shirt and tie are as peculiarly angled as his face, and the white flower he sports on his lapel is envelope-pushingly effeminate.

As satisfying as Curly’s demise is, nothing can prepare the audience for the joy that comes during Paco and Sergei’s final moments together before going their separate ways at the end of the film. Bracingly felicitous and optimistic, their farewell is uniquely serendipitous—more like the end of a Rohmer film than any sort of action flick.

In between Navajo Joe and The Mercenary, Corbucci directed several other westerns, including Death on the Run and Johnny Oro, neither of which was particularly successful. According to Alex Cox, Corbucci actually didn’t enjoy making westerns at all, and declared that he was calling it quits in ’67. We have fate to thank that he persevered through a few more pictures, for The Mercenary—which Tarantino has called one of his 20 favorite films of all time—is one for the ages.