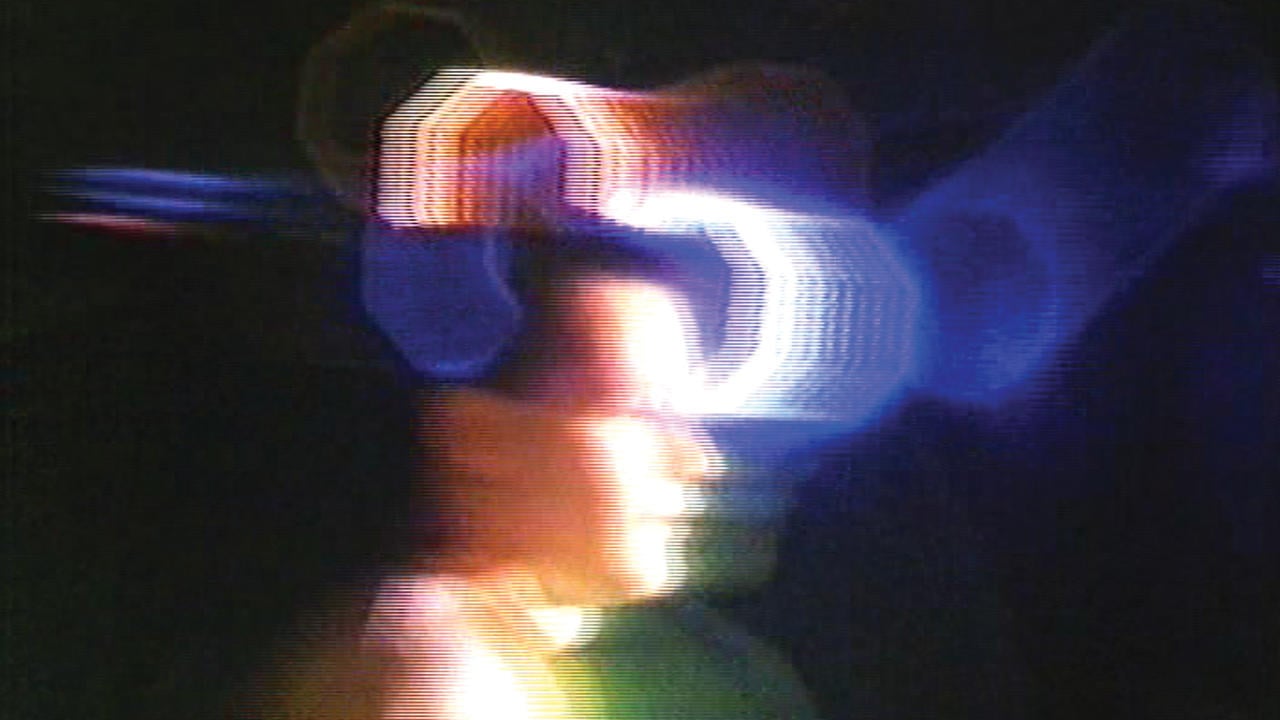 In 1984, British filmmaker Derek Jarman took his Olympus VHS camcorder into Benjy’s, a gay nightclub in East London’s Mile End district, and taped patrons dancing, talking, sitting, and drinking. The footage was meant for Ron Peck’s Empire State, released in 1987, and all indications suggest that Jarman never intended for this footage to be presented as a feature film, let alone an unedited delve into the pulsating rhythms of the night. Nevertheless, that’s precisely what Will You Dance with Me? comprises, unfolding as a typical home video from the era might, with the camera consistently turned toward movement and lacking supplemental commentary or context. In fact, the location’s specifics aren’t readily attainable from events within the film. The effect, too, follows this home-movie trajectory: initially intriguing for its presentation of a past moment, but steadily declining in interest without a guiding voice or, better, meaningful edits or direction.

Lacking both opening and closing credits, Will You Dance with Me? truly is a document of its time, with Jarman’s camcorder panning and moving throughout Benjy’s and finding several enthusiastic people on the dance floor during one stretch, then lingering on a group hanging around the bar for another. The music dictates the nightclub’s action, with floor-bangers such as Shannon’s “Let the Music Play” and Break Machine’s “Break Dance Party” bringing out some of the more enthusiastic dancers (the DJ favors “Relax” by Frankie Goes to Hollywood, which is played at two different points). Jarman shoots the dancing from a close vantage point, but generally tends to keep bodies fully in frame, allowing the movements a certain continuity that too many dance-themed films deny through rapid edits. In the film’s best moments, the dance floor consumes those on it, with one man’s grooving to Afrika Bambaataa and Soulsonic Force’s seminal “Planet Rock” a standout.

Will You Dance with Me? isn’t driven by quality dancing, but by the unstated inclusiveness of the Benjy’s dance floor. The nightclub’s patrons appear to span a multitude of ethnicities and seem nearly split in terms of gender, yet no one comments on that fact, because it’s understood decorum for those frequenting the venue. Accordingly, Jarman’s footage speaks to the freedoms afforded by the combination of a darkened dance floor and like-minded people, without necessitating a commentary. What’s presented is by no means an analysis of dance culture in 1984, though the film’s very unfolding plays like a testament to the nightclub’s function as a sanctuary. In hindsight, it’s almost impossible not to reflect on how venues like the now-defunct Benjy’s been changed due to the proliferation of tiny, brightly lit screens that allow patrons to momentarily escape from the nightclub’s sensorial confines.

While it’s true that Jarman’s camcorder chronicles the nightclub’s activity with the eye of an ethnographer, it’s also undeniably the case that the extant footage isn’t, nor was ever meant to be, assembled as a standalone feature. In effect, producer Ron Peck decided to unveil Jarman’s full recording in 2014 and slap a title on it, thus attempting to retroactively create a “new” Jarman feature. With that information at hand, Will You Dance with Me? can’t really be called Jarman’s film, especially since there’s no indication that the filmmaker ever advocated the idea, or even considered such a release at all. Were the finished film to have indicated this relationship with an opening title card explaining the necessary specifics, Peck’s project would feel less like a dubious attempt to further affiliate himself with Jarman’s legacy. Yet even then, Will You Dance with Me? would still unfold as untouched footage that was never meant to be presented as such.