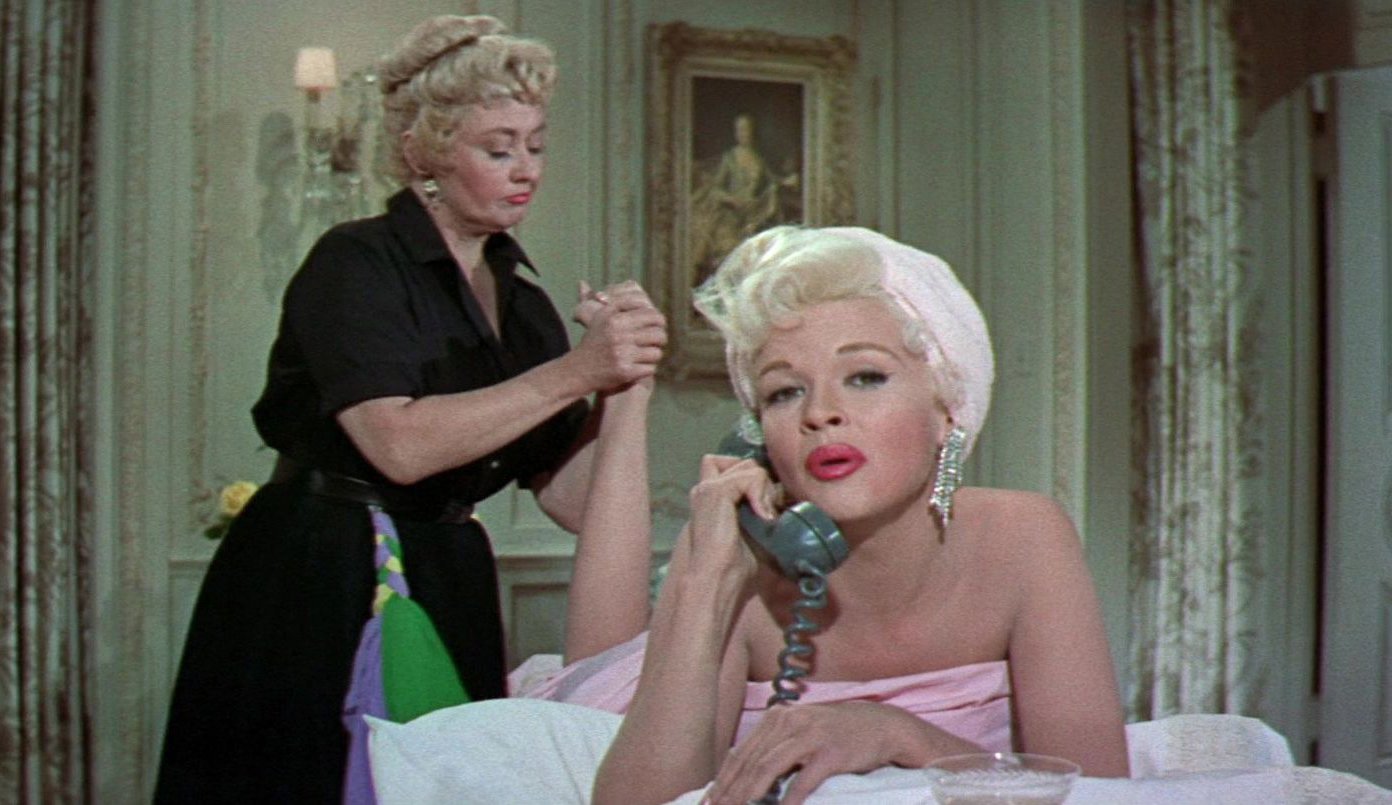 Frank Tashlin never could harmonize his celebratory/critical impulses toward American pop culture, so it comes as no surprise that Will Success Spoil Rock Hunter? is both his funniest and most despairing picture. It’s also fitting that, after surveying a culture’s many popular obsessions (comic books, movies, rock ‘n roll), the director saves the sharpest knives for the institution whose job it is to package them for mass consumption: advertising.

Following a trademark bit of Tashlinesque wall-breaking (star Tony Randall plays the Fox fanfare on a small orchestra of instruments, then forgets the title during his introduction), the opening credits roll as a series of tableaux-like sketches, each skewering the inanities of ludicrous products pitched frontally to audiences (“Pour yourself a full glass of that heavily-brewed, clear swamp water, Shelton’s Beer”; “Wow Soap contains fallout, the exclusive patented ingredient”). The sequence hints at a trenchant critique under the rollicking humor; the phony ads, ridiculous but hardly too far removed from authentic commercials, posit the notion of consumers serving their products instead of the other way around, culminating with a spokesperson pulled into the hungry maw of a washing machine.

The characters are being similarly devoured by the system they breathlessly scramble to support, chief among them Rock Hunter (Randall), a Madison Avenue ad executive sinking in the quicksand of slogans, jingles, and campaigns. His spot in the company’s totem is low, and he may lose his position if he can’t come up with an idea to sell his newest product, Stay-Put Lipstick. Fortunately for him, flying into town is Hollywood glamour superstar Rita Marlowe (Jayne Mansfield), whose “oh-so-kissable lips” make her the perfect lipstick spokesperson, and Rock’s movie-mad niece (Lili Gentle) just happens to know where she’s staying.

In an attempt to make her latest beau jealous, and reap publicity for her studio, Rita snatches the first man to walk into her room as her new squeeze—a case of “being in the right place at the right time” for Rock, and the popcorn in his pocket erupts into fireworks as he smooches a towel-wrapped Rita. This comic serendipity isn’t a plot contrivance, but an illustration of Tashlin’s slashing view of how, in a capitalist society, everything and everyone can be packaged and sold, regardless of their abilities: Just as Edmond O’Brien’s gravel-voiced gangster was turned into a teen sensation at the end of The Girl Can’t Help It, so here is Rock, who has trouble keeping his long-stemmed smoking pipe lit, knighted “Lover Doll” and promptly mobbed by scores of screaming young fans.

Though several characters are aware of the ad world’s machinations, none of them are above its sway, and, in one of the film’s most merciless gags, the hero comes home one night to find both his niece and his fiancée (Betsy Drake) paralyzed from overdosing in bust-expanding exercises. Because Tashlin, like Billy Wilder, often equated success in “the nonsense of what we call our civilization” with prostitution (or, at least, hucksterism), the title’s query becomes not so much a matter of whether than of when: Rock’s ascension in his firm’s importance ladder may seem divine, but to Tashlin it’s all just a Faustian deal sealed with the coveted key to the executive bathroom, a corrupt Holy Grail complete with a heavenly chorus.

People in Tashlin’s films often become extensions of their material possessions, and the irony of the merchandising cuts both ways: Just as Rita is a hilarious pop construct—a Marilyn Monroe spoof that’s also transparently Mansfield’s own dig at her image—she also molds Rock into a replica of her long-lost true love. Throughout Will Success Spoil Rock Hunter?, characters contort themselves to fit the fetishization of image rampant through society, always causing pain to their own souls; Drake hopes to lure Rock back to her by turning herself into a buxom fembot, but as she pliantly puts it, “Those tight sweaters are too heavy.”

Savage as it is, Will Success Spoil Rock Hunter? remains, paradoxically, among Tashlin’s most joyous works. Continuously vibrating with comic energy, the Cinemascope screen is a playpen of jubilant brassiness, compounded by superb performances. The director may loathe that the characters sell their souls, yet he can’t help but admire the brio and creativity with which they do it, like the ravenous force with which Rock embraces his new stud persona or the slippery glibness his associate (Henry Jones) employs in navigating Madison Avenue’s polluted waters. Tashlin knew that he was inescapably a part of the culture he was satirizing, and the picture’s head-on immersion in proto-New Wave homage (everything from Tarzan and Love Is a Many-Splendored Thing to Louella Parsons and Groucho Marx) amounts to the auteur’s confession of his complicity. After all, when a young fan announces that she’s going to see The Girl Can’t Help It again, “courageous youth” is all caustic sidekick Joan Blondell can snap.

Indeed, the film’s mid-narrative break could be seen as a reversal of the famous opening of The Girl Can’t Help It: Where Tom Ewell stretched the image into the widescreen rectangle, here Randall shrinks it down to the television square, made grainy and monochromatic “for all you TV fans.” Tashlin’s most radical rupture, however, lies in Blondell’s monologue about her days helping silent-film actresses and vainly attempting to forget a long-lost love, a moment of unexpectedly naked emotion where the character’s wisecracking façade is cracked and the pain underneath is captured in a harsh single-take.

Lured and trapped by the gilded cages of consumerism, the characters yearn for a Rousseau-like return to nature; Rock dreams of a chicken farm, while the company president (John Williams) would rather be tending to roses than clients. The film’s subversive tragedy is that the cartoon surfaces of Tashlin are closer to the entrapping gloss of Douglas Sirk than it is first apparent. The happy ending is nominally enforced, yet the characters remain frozen in their rigid roles, becoming, as Jonathan Rosenbaum has pointed out, “abstract Brechtian commentators on their own dilemmas.” Our laughter explodes only to dissipate grimly.

Through Fresh Eyes: Monster House, Cars, and the Evolution of CG Animation