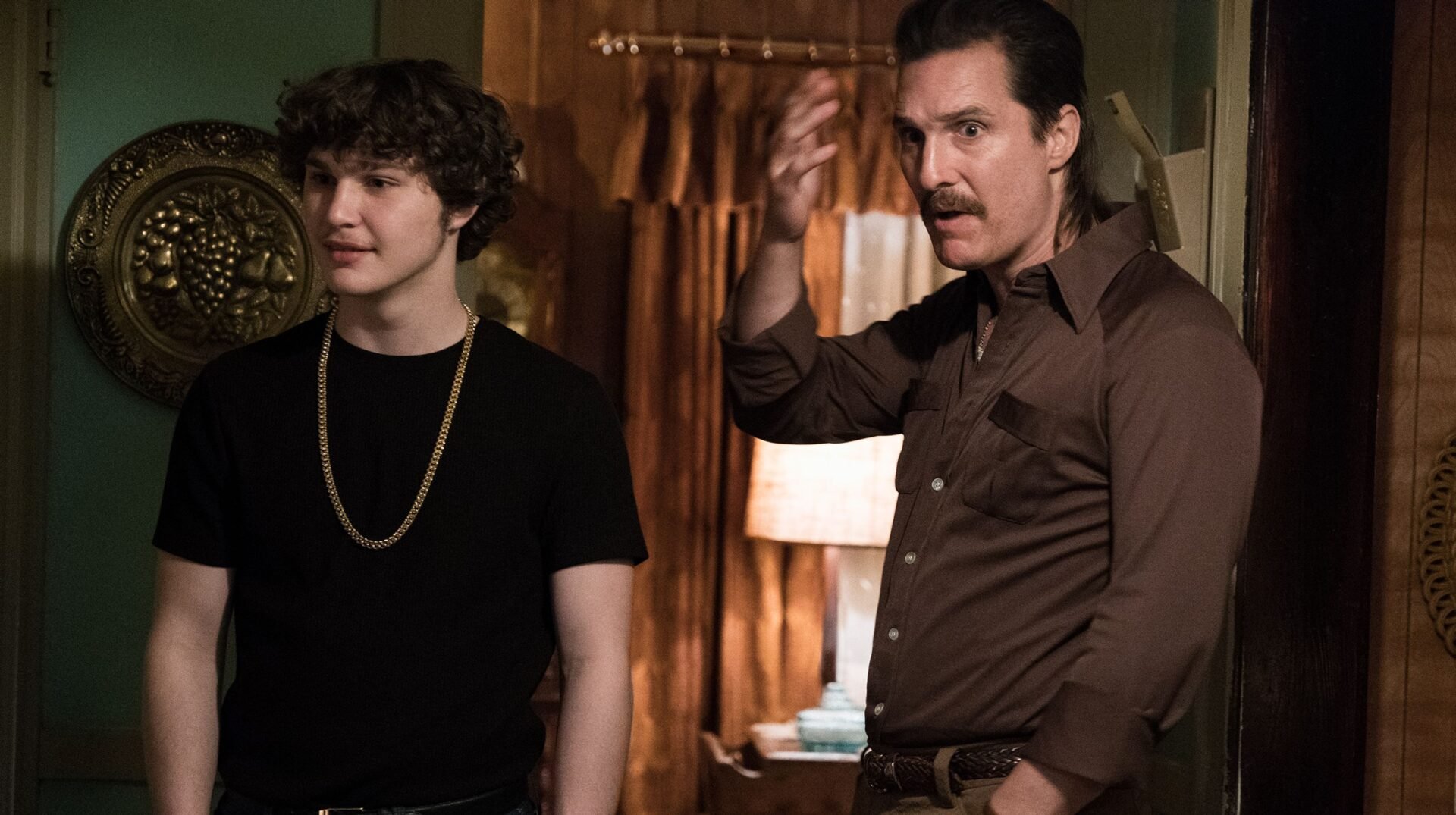 Characters don’t come much more unassuming than Rick Wershe Jr. (Richie Merritt). The 14-year-old son of an illicit gun dealer (Matthew McConaughey), he has a shabby quality to him. Dressed in department store clothes that hardly match and sporting pasty skin, a tangle of unkempt hair, and a wispy, pubescent mustache, Rick Jr. looks trapped by both economics and hormones. As his sister, Dawn (Bel Powley), says when Rick Jr. gets into trouble, “At least you haven’t lost your looks, ‘cause you never had them in the first place.”

At the start of director Yann Demange’s White Boy Rick, the boy has dropped out of school in order to hustle with Rick Sr., conning gun vendors into better deals for weapons that the pair, in turn, flip to customers of dubious backgrounds. Father and son live in 1980s Detroit, in the midst of the city’s precipitous decline, and the filmmakers quickly contrast the once-thrumming Motor City’s rotting structures and rising crime with Rick Jr. and his father’s aspirational goals. Rick Sr. in particular is a dreamer, envisioning a future in which he and his son go straight and open up a video rental store to attain the closest thing to prosperity that Detroit can offer anyone. Of course, the fact that the Wershes are still stuck in the dilapidated city is evidence of their lack of economic mobility, something that Rick Jr. clearly sees.

As crack inundantes Detroit’s streets, Rick Sr. rails at how drugs are ruining people’s lives, even though much of his gun trade involves under-the-table sales to dealers and gangs. And given his choice of clientele, he naturally comes under the suspicious eye of the law, and soon a team of cops and F.B.I. agents pick up Rick Jr. and use threats about arresting Rick Jr. to force the teen to act as an informant among the dealers with whom they deal.

Rick Jr. effortlessly ingratiates himself with a local gang almost right away, though it’s difficult to tell whether White Boy Rick suggests this owes to any preternatural bluffing ability on the kid’s part or to the sloppiness of local drug don Johnny (Jonathan Majors). Johnny, like almost every other drug dealer in the history of cinema, emphasizes his scrutiny of those around him to sniff out rats, yet he welcomes Rick into his crew without pause. Later, when the feds make Rick sell drugs on Johnny’s turf to bolster his cover, Johnny doesn’t subject the boy to anything harsher than a stern warning.

Numerous scenes in White Boy Rick contrast Rick Jr.’s adolescence and whiteness against the majority black population of Detroit and the hard-faced members of the drug underground. The obvious intimation of these images is that Rick doesn’t belong to this world, but the racial coding of this contrast has uncomfortable connotations that only get worse as Rick Jr.’s increasing transgressions, even ones that aren’t resisted by law enforcement, are treated as an uncontrollable and unfortunate downward spiral, while the actions of Johnny and his crew are shaded far more ominously.

Demange’s film leans hard on images of Detroit in decay to summon up an atmosphere of hopelessness, but the scenes of characters hitting up clubs and roller rinks that blast early hip-hop and techno are more effective for how they move past ruin porn, performing a temperature read of the city that’s more casual and nuanced. Merritt believably conveys his character’s sense of immature self-regard and how it never seems to waver, no matter how blatantly things spin out of control for him. Even stronger is the bracingly un-showy McConaughey, who matter-of-factly underscores Rick Sr.’s more pathetic qualities, such as the way the man regards his crack-addled daughter with bafflement and helplessness or, more insidiously, how his concern for Rick Jr. masks obvious envy of the boy’s considerable financial success at the drug game. Rick Sr. is presented as a man who only ever smiles when imagining a successful life that he believes is within reach.

Ultimately, though, White Boy Rick never overcomes its selective sense of moral outrage. It’s absolutely true that Rick Wershe, who was pushed into selling drugs by law enforcement and ultimately railroaded by the system to cover its tracks, was treated heinously by the judicial corruption at the heart of the war on drugs. But the film’s insistence that Rick Jr. is the “right” kind of criminal, while so many other characters in White Boy Rick come across as deserving of their own federal crackdown, undermines the filmmakers’ indignation on behalf of the real-life Wershe. Rick Jr.’s plight is a slight tweak on an all-too-common story in America, and by treating him as exceptional, Demange’s film validates the punitive system it seeks to criticize.

Review: Olivier Assayas’s Non-Fiction Is Richer in Ideas Than Drama