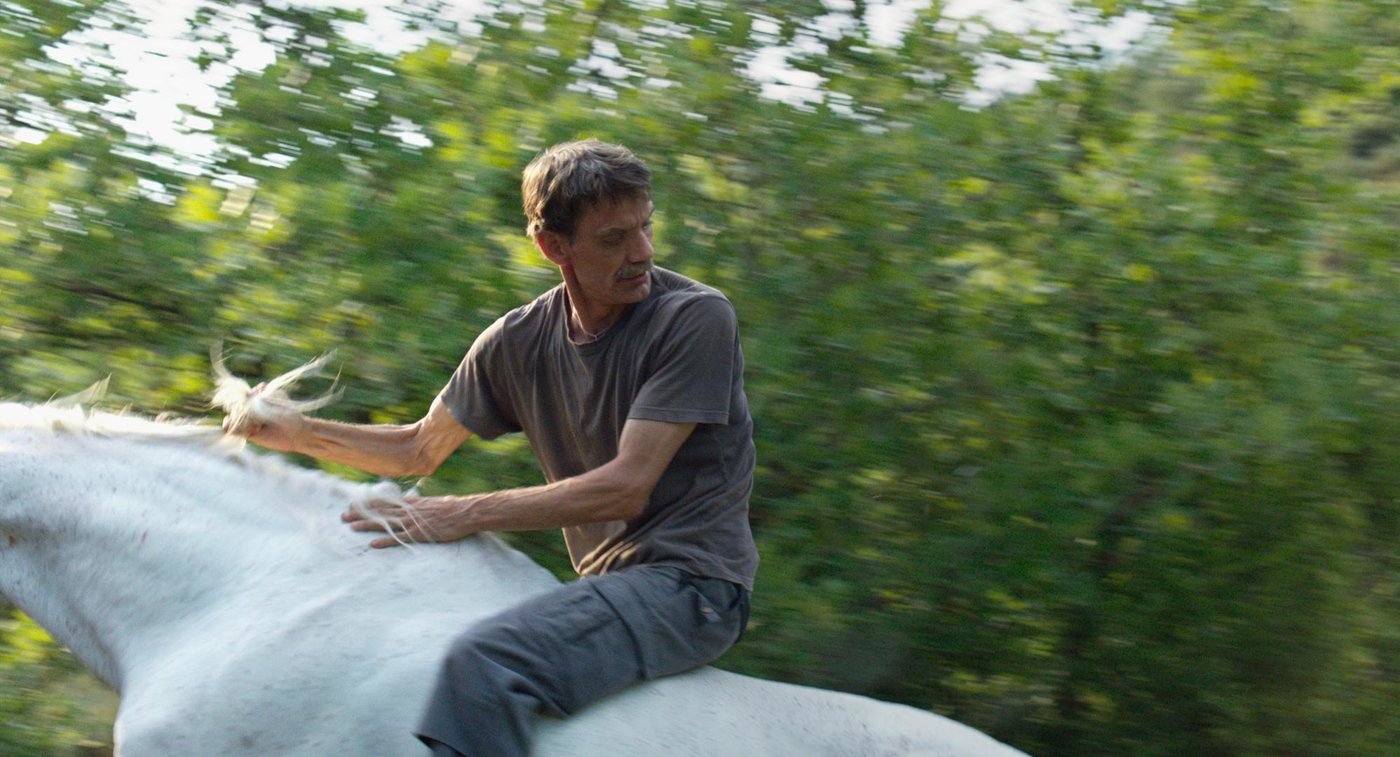 “War is war. Life is life. You can’t lump them together,” says a burly construction worker early on in Valeska Grisebach’s Western, immediately invoking the dichotomy between civility and savagery at the heart of the genre referenced by the film’s title. The seasoned audience member will recognize the hollowness in such a statement, as the most ageless westerns have proven time and again that violence—physical and otherwise—is the engine of civilizing progress. And though blood is scarcely spilled in Western, the film nevertheless teems with nervous tension as a German construction crew descends on a modest Bulgarian village to conduct work on a hydroelectric power plant in the hills nearby. In a supremely understated style, Grisebach sets this all-too-modern scenario in motion and charts the ways in which power and privilege unconsciously manifest themselves, turning a boilerplate engineering initiative into a loaded culture clash.

The film’s grizzled lone-wolf protagonist, the contract worker Meinhard (Meinhard Nuemann), first encounters ingrained animosity when he heads to town to procure cigarettes and is refused service by a hissing convenience store clerk. Because Meinhard is from Germany, his mere presence is enough to set the woman off, as his country’s occupation of Bulgaria during World War II is evidently still fresh on her mind. A stoic introvert and avowed pacifist, Meinhard avoids doing anything to escalate the situation, and generally resists the bullish negligence of co-workers like Vincent (Reinhardt Wetrek), who commemorates his troupe’s arrival by harassing a woman from town hoping to enjoy an afternoon swim near the work site. Meinhard’s low-key demeanor increasingly frustrates his unprincipled peers, who seek to cultivate a rah-rah boys’ club with overt nationalist sentiments, and expect the same when they learn of Meinhard’s history as a Legionnaire.

The Bulgarian locals, of course, have a more developed sense of community, and Meinhard, as a vagabond grieving from the recent death of his brother, wants in. Thus, the film establishes a triad of narrative forces structurally aligned with those of the classical western: the well-meaning outsider hoping to flee a life of trauma and violence, the unrepentant colonizers looking for cheap thrills in their temporary terrain, and the unspoiled natives wanting little to do with any of it. Instead of guiding this dynamic toward any one particular implosion, however, Grisebach juggles a number of mini-conflicts and a few surprising points of commiseration. While antipathy brews silently between Meinhard and Vincent, coming across in a series of wordless glances handled beautifully by these brooding nonprofessional actors, Meinhard goes out of his way to befriend a local family whose white horse he adopts for furtive trips between the construction site and the town.

The scenes detailing Meinhard’s attempts to connect with these people whose language he barely understands are the humanistic apex of Western—as much for the areas of connection found between the disparate groups as for the recognition that certain subjects and points of view cannot be broached or translated. Grisebach underscores this second idea through her confident reliance on moments of breakdown within communication; as she increasingly fragments Meinhard’s visits throughout the course of the film, we become privy to handfuls of awkward, pensive silences, such as the one that follows an accidental skirmish that leaves a boy from town momentarily blacked out by Meinhard’s reluctant force. The director, who shoots almost exclusively in medium-to-long focal lengths, as if observing her action rather than staging it, excels at documenting these rifts in communication, which play out in telling, “stolen” close-ups that go unsupported by any musical score.

This unadorned, occasionally monotonous aesthetic seems designed in opposition to the visual romanticism that typically characterizes the genre Grisebach is delicately riffing on, and the absence of anything traditionally “painterly”—the magic hour is almost entirely avoided, for instance—reflects an ambivalent attitude toward the kind of capitalistic pro-growth machinations on display in the film. (Maren Ade, one of Western’s producers, offers a similar mix of feelings regarding the same subject in her own Toni Erdmann.) Though Meinhard confesses to a cynical stance on his presence in the region (“I’m here to earn money”), he also harbors a guilty conscience about the ramifications of his team’s disruptive development. What Grisebach’s cunningly political film leaves intriguingly open-ended is the question of whether Meinhard’s community outreach reflects an honest desire to stand outside the inexorable flow of modernity or if it’s merely an opportunistic liberal-minded effort to appear more sensitive and advanced than his peers—and whether answering this question even matters.

Review: First They Killed My Father