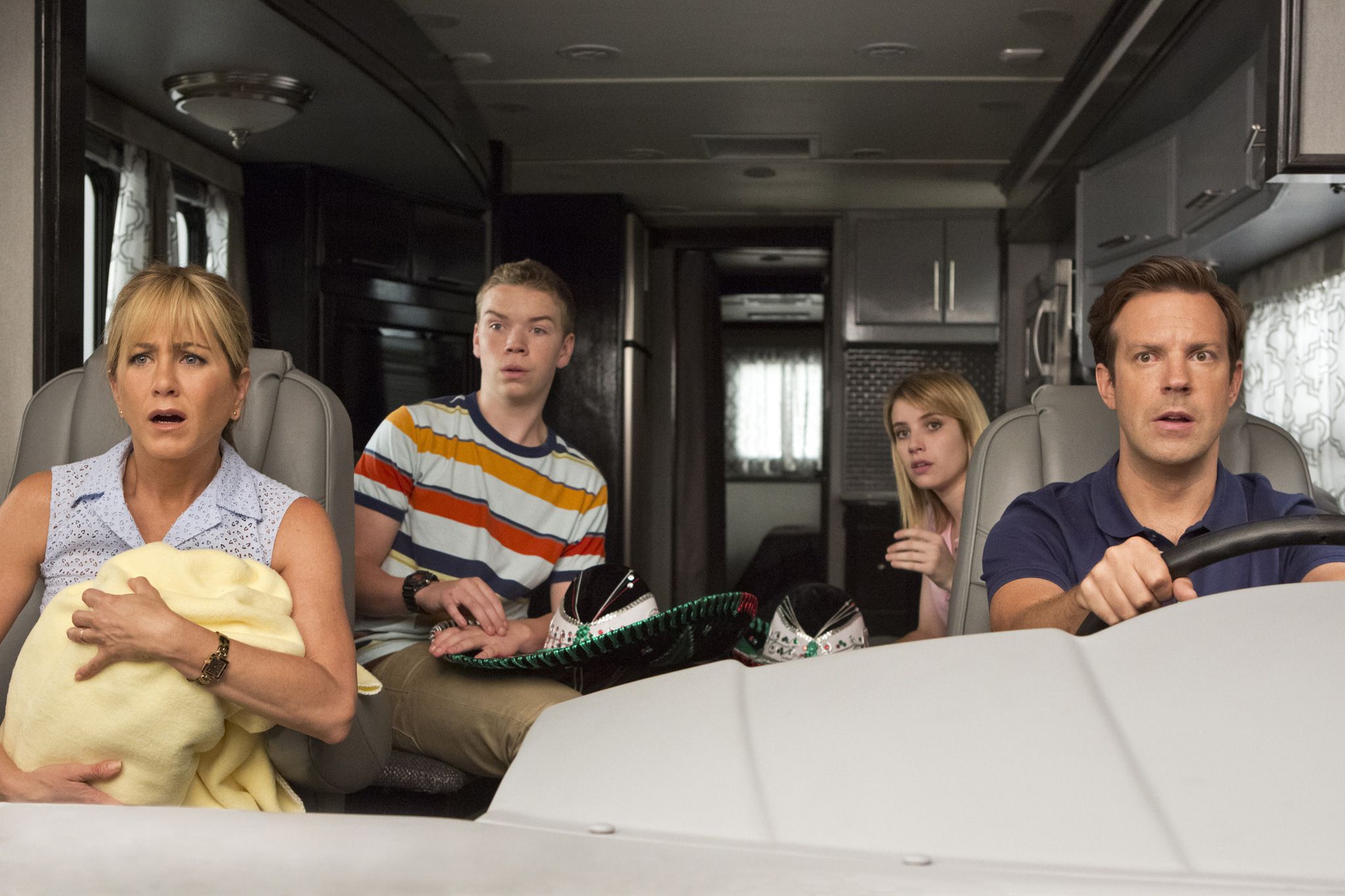 If We’re the Millers admittedly proves to be funnier, tougher, and much more consistent than nearly every other big-studio comedy released so far this year, it’s also a perfect specimen of comedy as conformity, a disappointing outcome for a film that occasionally undermines the appeal of blending in. For David (Jason Sudeikis), a low-level, Denver-based drug dealer, acquiescence is the name of the game when he’s forced to smuggle “a smidge of marijuana” out of Mexico for his carelessly wealthy supplier (Ed Helms). In an attempt to avoid suspicion at the border, David hires his neighbors to pose as his all-American brood seemingly returning from a family road trip, a thin, dull plot that the script initially encouragingly picks at. The film is sometimes riotous in its anxious deconstruction of David’s big lie and director Rawson Marshall Thurber brings a certain formal competence to the project, though he also deflates or boxes in a great deal of the vibrant comedic energy that his cast harnesses.

Thankfully, even when the film is bogged down in predictable story beats (money issues + impossible scam = true love and justice), Sudeikis, the funniest guy in the room for some time now, continues to tap into a rambunctious strain of middle-aged malaise, and the supporting cast responds wonderfully. Filling out the obligatory teenager quotient are Emma Roberts as Casey, a foul-mouthed runaway who trolls the area around David’s apartment, and Will Poulter as Kenny, the virginal boy next door to David. Roberts does well in a underwritten role and Poulter works up a strong comedic repartee with Sudeikis that’s rewardingly unsentimental, but it’s Jennifer Aniston’s Rose, a newly unemployed stripper who agrees to pose as David’s wife, who’s most revealing. Aniston is a fine actress, but she isn’t allowed to make full use of her proven talents for bringing out the despondency and desperation of characters, sometimes with as little as the tilt of her head or the raising of an eyebrow. Here, she makes Rose’s eruptive frustration with her life meld beautifully with David’s general dickishness, but her character is continuously confined to the dictates of the narrative. The script is too busy bringing Rose and David together, or insisting that Rose perform a lengthy striptease to distract a cartel boss (Tomer Sisley), to allow Aniston to fully explore the hurt and panic at the heart of her character.

In its most basic reading, the story is a mild subversion of familial bonding: It’s David’s predominantly bland and safe vision of a white American family that essentially allows him to sneak two metric tons of marijuana across the border. By casting creative humorists in key roles, including Nick Offerman, Ken Marino, and Kathryn Hahn, Thurber is able to take some of the polish off the veneer of normalcy and embrace eccentricities, but he sadly adheres to that very same normalcy in the third act. Sisley’s villain only shows up to remind the audience that there’s a dude with a gun in the movie, and the climactic face-off at a carnival gathers up and expels the limp conflicts in one hugely unconvincing swoop. This concluding pandering takes the kick out of everything, including a particularly memorable scene in which Kenny is bit by a spider, and though the cast partially eschews the family-friendly timidity that We’re the Millers defers to in the end, Thurber’s would-be wild thing remains little more than a rowdy endorsement of the status quo.

Summer of ‘88: Clean and Sober