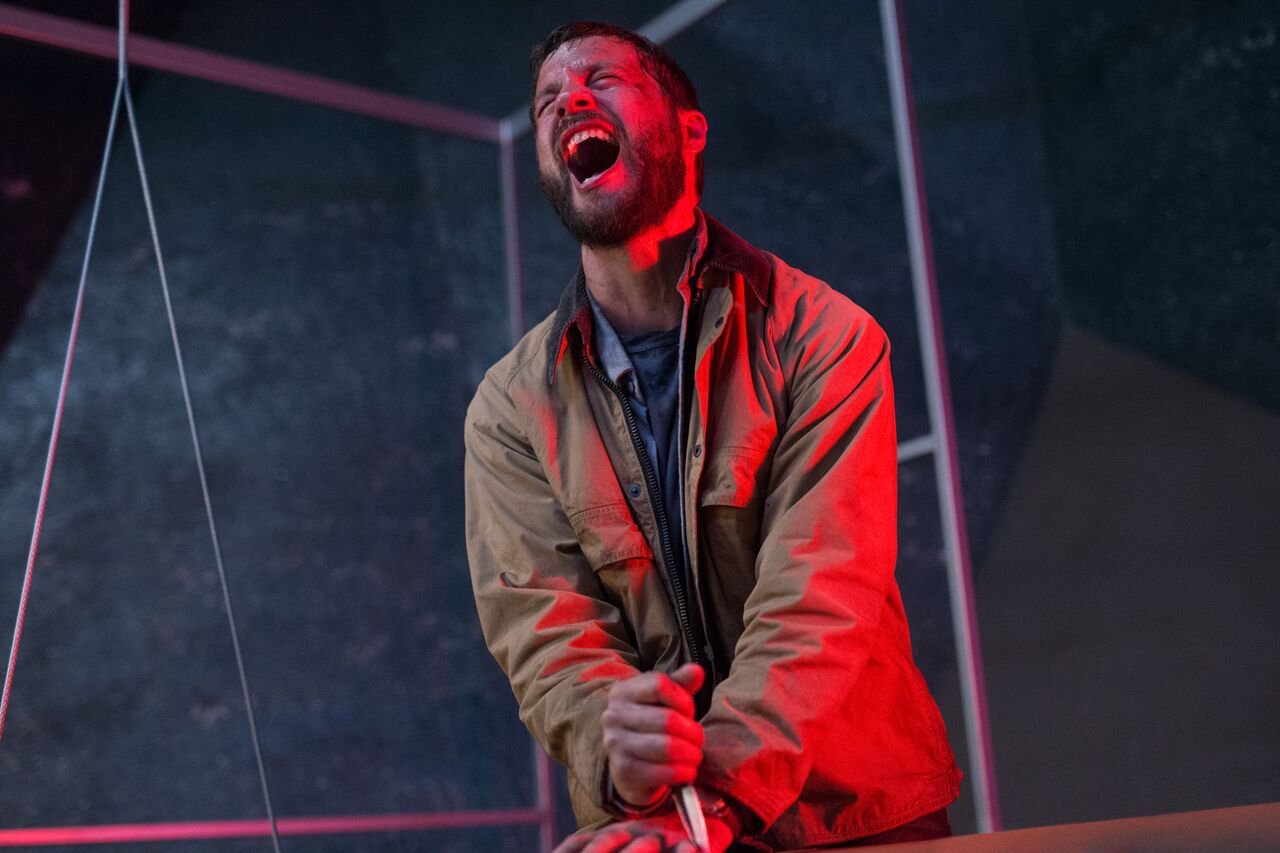 Leigh Whannell’s Upgrade opens with a computerized voiced announcing its various production companies, before then cutting to a garage where Grey Trace (Logan Marshall-Green) is listening to Albert King on vinyl while tinkering with the muscle car he’s rebuilding. It’s a blunt collision of sonic and visual textures that efficiently frames this piece of futuristic speculative fiction as a battle between a dying analog world and a digital world dominated by self-driving cars, smart houses, and cyborg technology.

Upgrade overplays its hand a bit in its handling of this duality by partnering Marshall-Green’s old-school handyman with a wife, Asha (Melanie Vallejo), who’s not only a hotshot in the tech field but also fills their home with the very technology that Grey appears to despise. But in a fairly swift manner, Whannell gives us a sense of both Grey’s love for his wife and his fear of technology. And this early world- and character-building pays off quickly once, following an accident involving a malfunctioning self-driving car, Asha is killed and Grey is left completely paralyzed, lending an emotional gravitas to the grieving husband’s hunt for the group of thugs who gunned her down.

The real hook of Whannell’s narrative is revealed soon after in the form of an experimental technology called Stem, designed by a reclusive genius, Eron (Harrison Gilbertson), who uses Grey as a human guinea pig. As Grey adjusts to the advantages and quirks of this freshly installed technology, he not only discovers that Stem communicates with him in an Alexa-like voice that only he can hear, but can also temporarily block pain receptors and allow for a full-body override where the supercomputer takes over Grey’s motor functions and can move his body at absurdly and inhumanly quick speeds. It’s here that Upgrade announces its allegiance to the technophobic nihilism of Black Mirror, though it serves up its cautionary tale with a schlocky blend of dark humor, breakneck action, and unsettling body horror.

The film’s captivating blend of comedy and action is particularly prevalent when Grey initially gives control of his body over to Stem after he begins tracking down his wife’s murderers. Throughout numerous fight sequences, as Grey robotically but precisely executes martial-arts moves that are foreign to him and brutally offs knife-swinging foes, he looks on in both shock and awe at the violence his body commits without his conscious participation.

The mind/body split that Grey struggles with is central to several action scenes driven by kinetic camera moves whose geometrically precise tilts and pans mirror the protagonist’s cyborg-like movements. But as Grey muscles his way to Fisk (Benedict Hardie), a man whose sneeze is literally murderous, the amusing novelty of the film’s gonzo concept begins to lose some of its luster. Whannell’s thinly conceived narrative gives way to predictable plot twists while also hashing out a tiresome cat-and-mouse game between Grey and the cop, Detective Cortez (Betty Gabriel), assigned to his wife’s case and who eventually uncovers Grey’s secret quest for vigilante justice.

Upgrade is most effective when mining the comical and bizarre love-hate chemistry between Grey and Stem and pairing that singular conflict with batshit-crazy action, but the film’s follow-through is clunky and unfulfilling. As the adrenaline rush of its initially relentless action subsides, Upgrade finds itself with little to say besides “beware of artificial intelligence.” Fortunately, Whannel’s adeptness at visualizing his central thesis via comedic action offsets the shallowness of his critique of a dystopia where man’s free will is voluntarily handed over to the very technology with the power to destroy it.