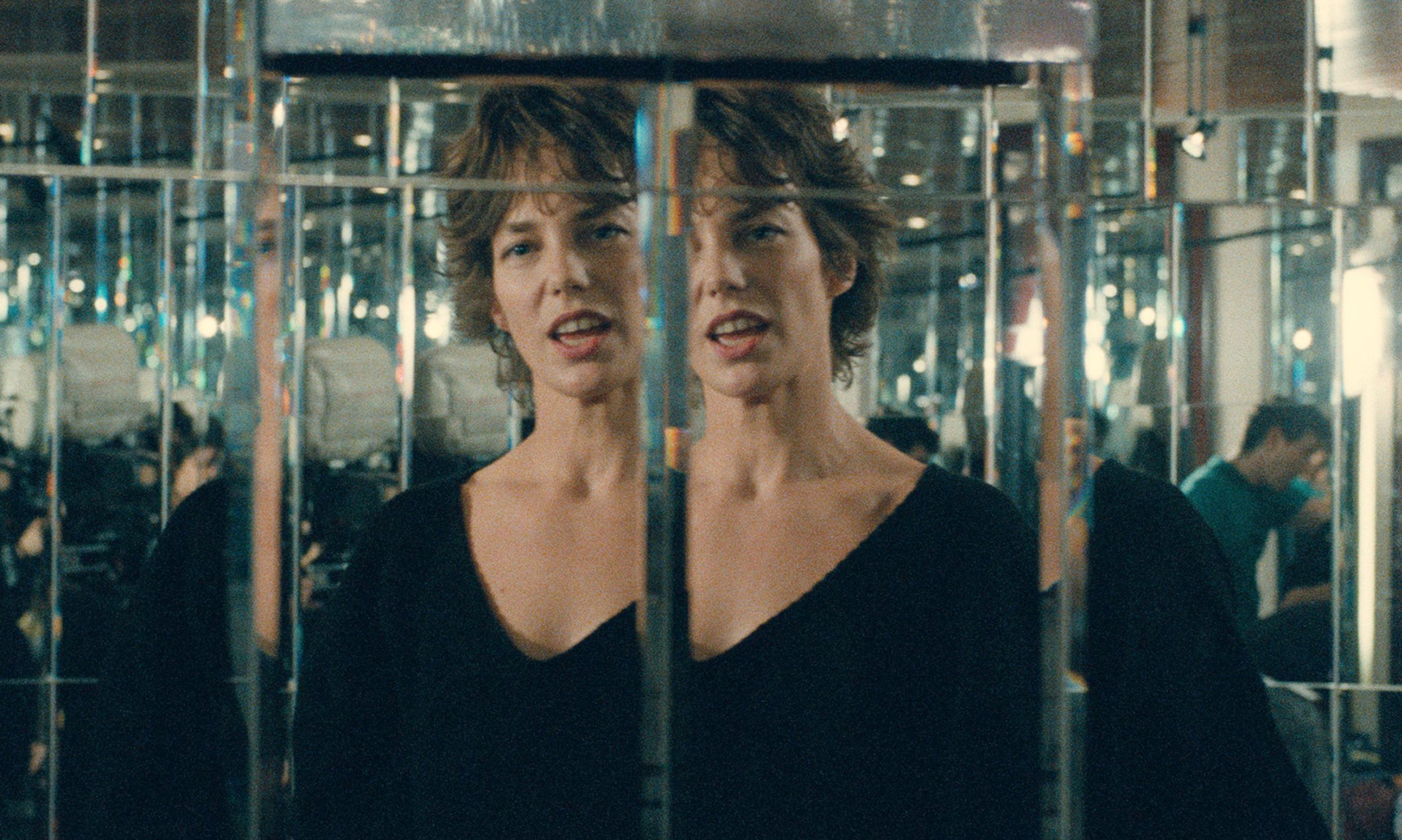 Toward the end of Jane B. par Agnès V., Jane Birkin turns to Agnès Varda, who sits on a staircase while stroking a cat, and says: “Why don’t we shoot a family project?” An initial irony emerges: Jane B. par Agnès V. is already a family project, staging Birkin’s life as a “public fantasy” or “an imaginary biopic,” as Varda later called it, in order to explore the many dimensions of Birkin’s star persona. However, a further irony takes hold once the pair starts batting around ideas. They settle on a premise where Birkin’s character, a 40-year-old single mom, will fall for the 14-year-old friend of her daughters, to be played by Mathieu Demy, Varda’s real-life son.

This brief premise is the basic narrative for Kung-Fu Master!, a film Varda made in tandem with this one, and the final irony, within the course of Jane B. par Agnès V., is that sequences from the other film play over their discussion of various, imagined scenes. The effect is something of a paradox, since there are two characters conceptualizing something that is already fully formed and completed. Their imaginings of what the film might look manifest as actual scenes from the other film. In all likelihood, Varda shot Kung-Fu Master! first, then shot and cut Jane B. par Agnès V. with the retroactive knowledge of what lay ahead, which would make it, in effect, a kind of prequel, for lack of a better term, to the other film.

However, that should not end the conversation regarding this moment, which seems both pivotal and essential for grasping what Varda is up to with these companion pieces. After all, one could easily ascertain through research the order in which each film was made, whether or not Varda staged the discussion scene with Birkin after having already shot Kung-Fu Master!, and could ultimately create a chronological timeline to resolve this pretzeling of events.

But that resolution is superficial, a fool’s errand convinced that meaning and experimentation can be contained by strict ordering and fact-based progressions of causal intent and action. If Varda’s oeuvre reveals anything comprehensive, it’s displeasure with both conventional cinematic time and contrived appeals to achieve either realism or confined, elliptical narratives where character resolution becomes the utmost concern. What remains in this sequence is an impossibility of logical sequencing—a moment that’s simultaneously a flashback and a flash-forward.

Varda’s play with temporalities, then, lies at the heart of both films and drives each of their anarchic spirits. Kung-Fu Master! is the more conventional of the two, but its retroactive significance is partially derived from its placement within Jane B. par Agnès V. Nevertheless, one could view Kung-Fu Master! without knowledge of the other film and find great meaning. It’s a youth film, in many senses. By following Julien (Demy), the film partially adopts an interest in his actions, like video games and drinking with friends. The title comes from his favorite arcade game, which the film mostly depicts as an alluring screen emitting a red/blue glow on whomever’s face stands before it. That includes Mary-Jane (Birkin), whose turning 40 sends her reeling into an impressionable state where Julien’s impulsive passions are compelling. She watches Julien play video games as if she’s actually overwhelmed by his skills. Perhaps she really is and, in some ways, maybe Varda is too.

In Jane B. par Agnès V., Birkin says, regarding birthdays, “the years with zeros on the end” hurt the most. Varda made these films just after turning 60, and her interest in generational divides is clear, as is the ways incremental, language-based implementations of aging (youth, middle age, old age) can be turned on their head. In participating with Mary-Jane and Julien, but also Jane and Mathieu, as it were, Varda doesn’t so much reclaim her youth as brush away notions that she ever lost it.

These would be rather wistful notions were Varda not also grounding the films within their specific moments in time. In Kung-Fu Master!, coverage of the ongoing AIDS crisis fills television screens on a regular basis. At one point, an extended family gathers in the living room to watch a lengthy news segment, which Varda lets play out in seeming real time. Once again, Varda stages the unfolding of time as a simultaneous marker of difference and convergence. The broadcast’s discussion of condoms and cleanliness might outwardly seem to dictate Mary-Jane’s interest in Julien (an innocent, virginal, untainted boy), but such a reading psychologizes Mary-Jane into a dead end, since Varda’s interest in decision-making and desire isn’t nearly so neat or encapsulating.

In fact, at one point in Jane B. par Agnès V., Varda tells Birkin, “I might just corrupt your script. I prefer daydreams to psychology.” And that, finally, is the rub. Varda’s interest in atemporal thinking, combined with Birkin’s preference for reason and causal action, make each film both documentary and fiction. Each slips in and out of a representation and interpretation of events. The question is: Which is which? Does Jane B. par Agnès V. beget Kung-Fu Master!? Or is it the other way around? Or, finally, is a linear conception of intent and action too simple and antiquated to reach a satisfactory conclusion?

Both films act as instruction manuals for how to read the other. Varda’s films ask to be understood as fragments of thought and lived experience, where the cinematic medium enables a deliberate disjunction of time and space, certainly, but in Varda’s realm, life is already this way and capable of being engaged without the strictures of so-called “common sense.” For Varda, sense could never be such.