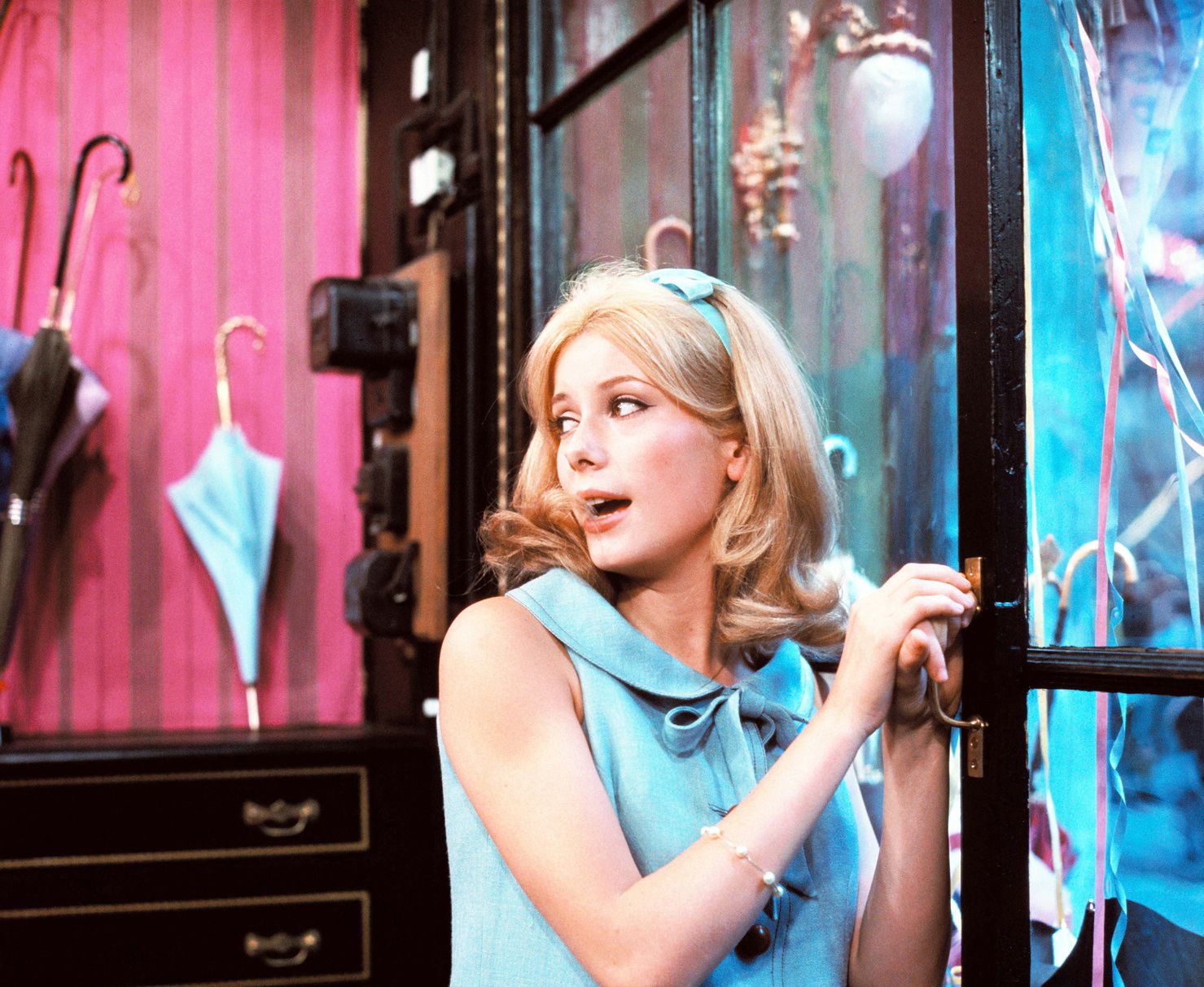 Jacques Demy’s The Umbrellas of Cherbourg retains its direct appeal to the eyes, ears, and tear ducts after nearly five decades, with an emotionalism that’s shameless but never crass. A first-love melodrama set in the French port city of the title, it stood as a bold reinvention of the movie musical in 1964, just as the genre was beginning a nosedive in its Hollywood birthplace. It became an international hit celebrated for Michel Legrand’s sung-through score, a primary-color palette that gave its boutique, garage, and cobblestone street settings the aura of a fairy tale, and Demy’s success in getting audiences to blubber at the pathos of thwarted romance, decorously adding elements like teen pregnancy and prostitution that had never been part of the just-expired golden era at MGM. (“Here comes the third hanky,” Legrand recalled the writer-director gleefully strategizing in preproduction sessions.) If the aesthetics of characters bursting into song was starting to meet with resistance as the Beatles prepared to storm the globe, Demy consciously upped the ante of artifice with his candy-hued spectrum, an entire off-screen cast singing for his lip-synching actors, and in nonstop reliance on his composer’s melodies, both lilting and keening, to carry the plot.

From the first scene in the garage where young mechanic Guy Foucher (Nino Castelnuovo) finishes up his day’s labors, the soundtrack startles, with some big-band swing in the flavor of Frank Sinatra’s contemporaneous recordings with Count Basie as the car jockeys wash up and open their lockers, musically trading everyday banter. (One warbles a preemptive crack on preferring film to opera: “All that singing gives me a pain.”) Guy is moony-eyed with passion, and it’s not something the viewer has to accept on faith. His girl, Geneviève Emery, is embodied by 19-year-old Catherine Deneuve in her breakthrough role, and it doesn’t seem like 20/20 hindsight to intuit as inevitable her reign as a world-cinema goddess with every smile, sob, and gaze she performs as a naïve shopgirl in the umbrella store run by her well-intentioned but hectoring widowed mother (Anne Vernon). Castelnuovo is dark, dimpled, and sweet—and Deneuve’s breathtaking looks establish a sort of hierarchy between the lovers. When Guy receives his draft notice and packs up for the Algerian war, leaving behind both Geneviève and his dying aunt, Élise (Mireille Perrey), it’s clear that their ostensible future rests entirely on her resolve.

If The Umbrellas of Cherbourg reaches an unsurpassable crescendo with the weepiest train farewell in cinematic history at its midpoint, Demy’s visual intelligence and refusal to paint Madame Emery or Geneviève’s new diamond-merchant suitor, Roland Cassard (Marc Michel), as villains are more apparent once the lovers have separated. The association of black with Roland, from his Mercedes to a wall he’s framed against in the umbrella shop, seems not to translate as deviousness, but as a mark of the man’s own burdensome lost love (an explicit reference to Michel’s role in Demy’s Lola from 1961). And the frequent long takes in the mother-daughter scenes permit us to notice how Deneuve’s changing costumes and hair suggest that a daughter is inexorably repeating the practicality of her mother’s life choices (both wear fiery red when Geneviève confesses that she’s carrying Guy’s child).

Beneath the jazzy pop and aching strings of Legrand’s orchestrations is laid the brutal essence of a couple’s dissolution: War separates them, and economics makes their reunion all but impossible. Demy doesn’t bludgeon us with the ironies working against the youthful vows of fealty, and he sneaks in some mordant wit, as when Elise informs Guy that her highly eligible nurse, Madeleine (Ellen Farner), is still unmarried: “You know how well behaved she is.” Through its poignant finale, a virtual snow-globe scene in a nighttime gas station, Demy and Legrand give their unhappy love story a depth that, beneath the tinsel and Technicolor, only comes with a beating, broken heart.

Review: The Prime Ministers: The Pioneers