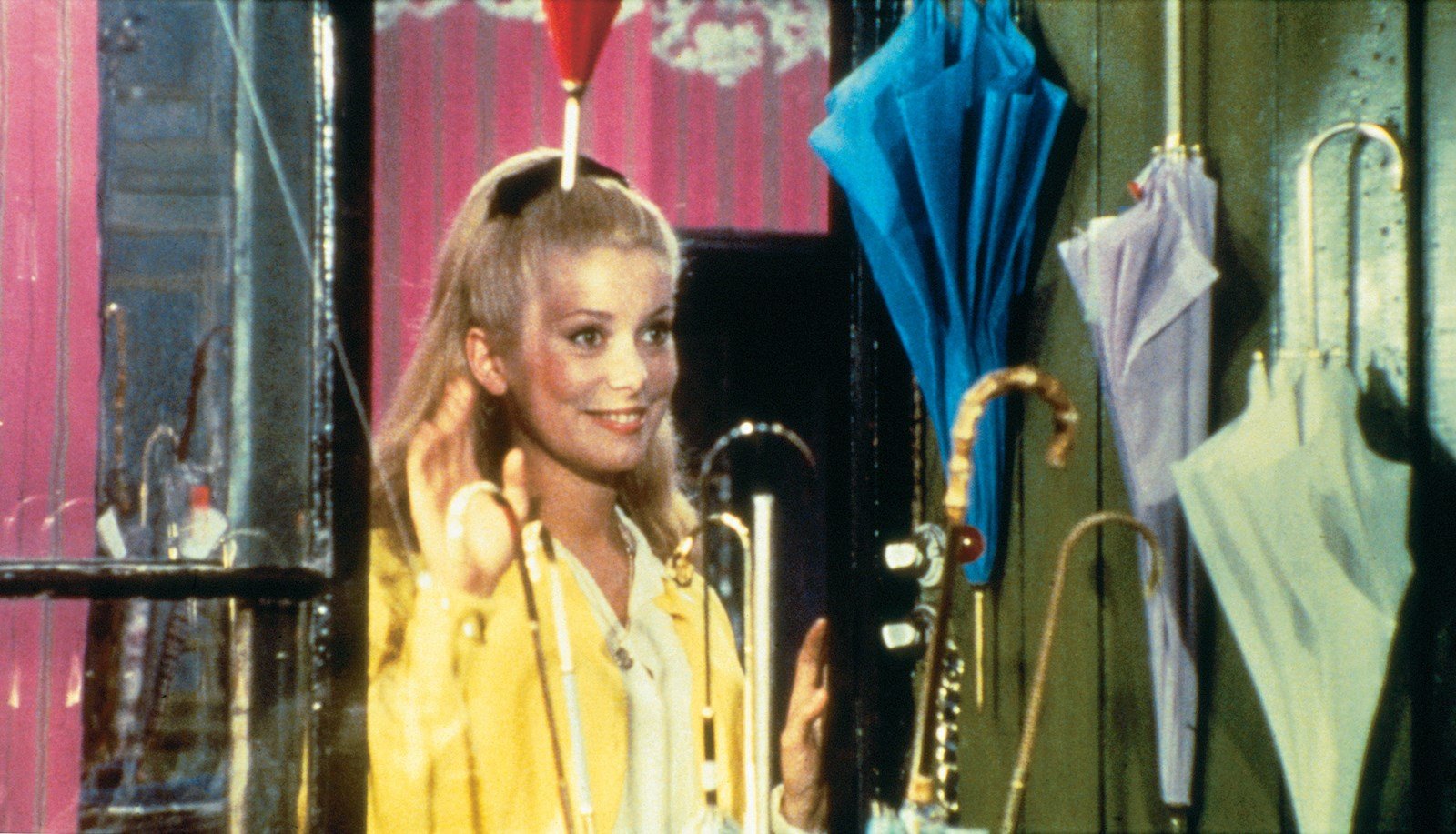 Undeniably one of my top 10 or 20 favorite films, but depending on the day of the week, The Umbrellas of Cherbourg may or may not be my favorite Jacques Demy. Sometimes it’s too arrestingly colorful, the melancholy in Guy’s eyes too insistent, and its close-mouthed truth too loud. It is one of the most beautiful things committed to celluloid, and as it often is with Demy, deceptively simple, while being actively, yet cat-foot quietly sad. This film confirms my worst fears about love. There’s no such thing as a Great love, or else, it doesn’t last; time obscures feelings and memories and what was once indelible becomes lost in a weed-molested corner of the mind.

This is Demy’s most popular and heralded film (winning the Palme D’Or at Cannes in 1964), the one that makes it out of the footnotes and into the meat of rapturous paragraphs of history and theory books. Gloriously shot by Jean Rabier, Demy’s cinematographer on his previous film, Bay of Angels, and scored by an inspired Michel Legrand. Out of all of the music he has composed, and out of all the collaborations with Demy, Legrand will forever be remembered for his work on this film. Also, this was the first film to have every single word of dialogue sung (though the voices are far from flawless), making it closer to an opera than a musical.

The story’s straightforward: Genevieve (Catherine Deneuve), who helps her mother, Madame Emery (Anne Vernon), run an umbrella store and Guy (Nino Castelnuovo), a mechanic, are in love and wish to get married. Both are young and given to dramatic declarations and promises of love. Genevieve’s mother, however, is opposed to the union from the start, claiming her daughter’s too young to marry. But soon enough, the Algerian War claims Guy’s services for two years. The two part amidst a monsoon’s worth of tears, though not before consummating their union, which leads to Genevieve’s pregnancy. Then, in an unrelated event shortly following Guy’s departure, Genevieve and her mother face financial crisis, at which point Lola’s Roland Cassard (Marc Michel), now a successful jewelry salesman, comes to their aide and in turn falls for Genevieve. Time passes and eventually Genevieve marries Roland, and Guy marries Madeleine, the girl who has quietly been in love with him all along and the caretaker of his sick godmother.

The dissolution of Guy and Genevieve’s romance is a perfect parallel to the way we experience cinema. We behold an image (and sound) on screen and for the instant that it’s before our eyes it’s as bright and overwhelming as anything we’ve ever encountered (particularly when viewed in a theater). But a moment later, when a new composition replaces the previous image, what was once definite and vivid begins to recede in the mind. After a few minutes we can no longer be certain of the exact placement of the vase on the tabletop and whether it contained roses or peonies, or the stoop of the man’s shoulders and the exact phrasing of his whisperings as he bent down to kiss his child goodnight. A few hours later and we may forget that such scenes even existed. Time slowly pilfers away colors, words, feelings; a once delirious love fades. When Guy is gone Genevieve says that when she remembers him all she can think of is the one photograph she has of him in his military uniform. She wonders aloud why she is still alive when she was so sure of immediate death upon his absence. But for love to endure it must always play the circus contortionist. Two years is a long time, especially to the young and impatient, but it is not forever. Genevieve could have waited to marry Guy, but then again, she was pregnant, and somehow I doubt that 1950s France would have applauded a young, unwed mother. And Guy, maybe he could have written to her more and not let months go by without correspondence. So many maybes and ifs, but how can a love that seemed so sure of itself, so steady in its gaze and so pure, let itself be swept away by the Cherbourg rain? Perhaps it’s because they didn’t know how, or else refused, to adapt their love to suit their changing relationship.

But of course, Great love, like Great cinema, even if it only lasts in the moment, makes an indelible impression. For though we may not remember the detail of each and every scene and even if the plot has been long forgotten, a work that means something to us imprints its stardust upon us. When finally exhumed, the reminder of past love, though long stolen away by time and buried deep behind layers of newfound love and happiness, comes as shockingly painful. Guy and Genevieve accidentally reunite when she stops to get gas at his filling station. The incredibly pained, shy exchange between them, and his quick shake of the head, declining to see his daughter, reveals the fingerprints of their romance.

The melancholy of love lost is tempered by the joyous beauty found in every square centimeter of the film. The color and print of every article of clothing, every wallpapered or painted wall and every turn of weather is calibrated for astonishing beauty and (never style over substance!) thematic significance. Every character is associated with certain colors; Guy’s green/blue, Genevieve’s pink/yellow, Madame Emery’s tones of red, and Roland’s, quite uniquely, black. When Roland comes to dine with Genevieve and her mother, the three of them sit at the table, forming a triangle. Roland in black on the left, Genevieve in bright pink on the right, and Madame Emery at the head of the table, between the two of them, black dress and pink gauze shawl. She is black and pink, and while this is entirely pleasing aesthetics-wise as she compliments the attire of the other two, her black-and-pinkness also denotes her role as intermediary. For she wishes to fix Roland and Genevieve in a union and is the bridge across which their footfalls must tread, the necessary emissary.

No other characters in the film aside from Roland ever wear solid (if any) black. Roland is a deeply caring and kind man, one who has known his fair share of heartache (being left by his Great love Lola), and one who is done with childish caprices, ready to be with someone in a love of lifelong metamorphosis. But his all-black ensembles mark him as a sort of grim reaper. In the very first scene following the opening credit umbrella overture, we see Guy at work in the garage. A man in a black car and dressed in black pulls into the background. Guy remains in the foreground and tells his boss that he can’t stay and work late, and thus Roland’s car is left to the service of a different employee. Demy doesn’t draw attention to this scene and if we aren’t looking carefully, and don’t already know Roland’s identity from Lola, the appearance of this customer seems rather unremarkable. But, of course, it is remarkable. In this scene, Guy and Genevieve’s love is new and fresh, in its beginning and at its most urgent. And there is Roland, in black, the man who Genevieve will eventually end up with. Roland’s appearance at the garage begs the oft-posed question: is the end inherent in the beginning? Yes, it is. The film lets us know that from the very start; the credits are played over a parade of umbrellas bobbing up and down the street through the rain. The passing umbrellas are an array of pastels, grays and fever-brights, but the shot ends with a line of black umbrellas cutting in a horizontal line across the screen.

Despite the bursts of cynicism—or more like pessimism, for Demy is too colorful to be a true cynic—he has a great respect and sympathy for his characters. Take for instance the four shots in which Genevieve and Guy travel from the garage to his apartment. Genevieve meets Guy at the garage and he tells her that he’s been called off to the army; the two of them embrace and cry, Genevieve on the left side of the screen, Guy on the right. Then the camera cuts to them embracing in a café as she further cries and they discuss his departure, with Genevieve once again on the left, Guy on the right. Then the camera cuts to the two of them locked in the same embrace as in the previous shot only they’ve switched sides, and they literally glide down the street, stopping before his apartment. And finally, the fourth cut captures them right where they were standing before, only from a different angle. Editing on action for continuity within a scene (a shot of scissors falling, cut to them hitting the floor) is a conventional practice. But in this case, Demy doesn’t cut for continuity within a scene or shots limited to just one specific location; he uses continuity editing to move Guy and Genevieve through a vast amount of space. Guy and Genevieve talk throughout this entire sequence, but Demy stays away from shot/reverse-shot editing, or close-ups. Aside from the aforementioned 4 edits, Demy never once cuts during their entire exchange. At the cafe the camera moves gracefully from Genevieve’s tear-stained face to Guy’s anxious one, then pulls back to capture the two of them grieving together. Any sort of cut or montage would be cruel, a premature separation. In a few minutes more their worst fears will come true and they’ll be separated; only they don’t yet realize that it’ll be forever. For now, every single moment of their union is precious and the fervent sincerity of their emotions is to be respected.