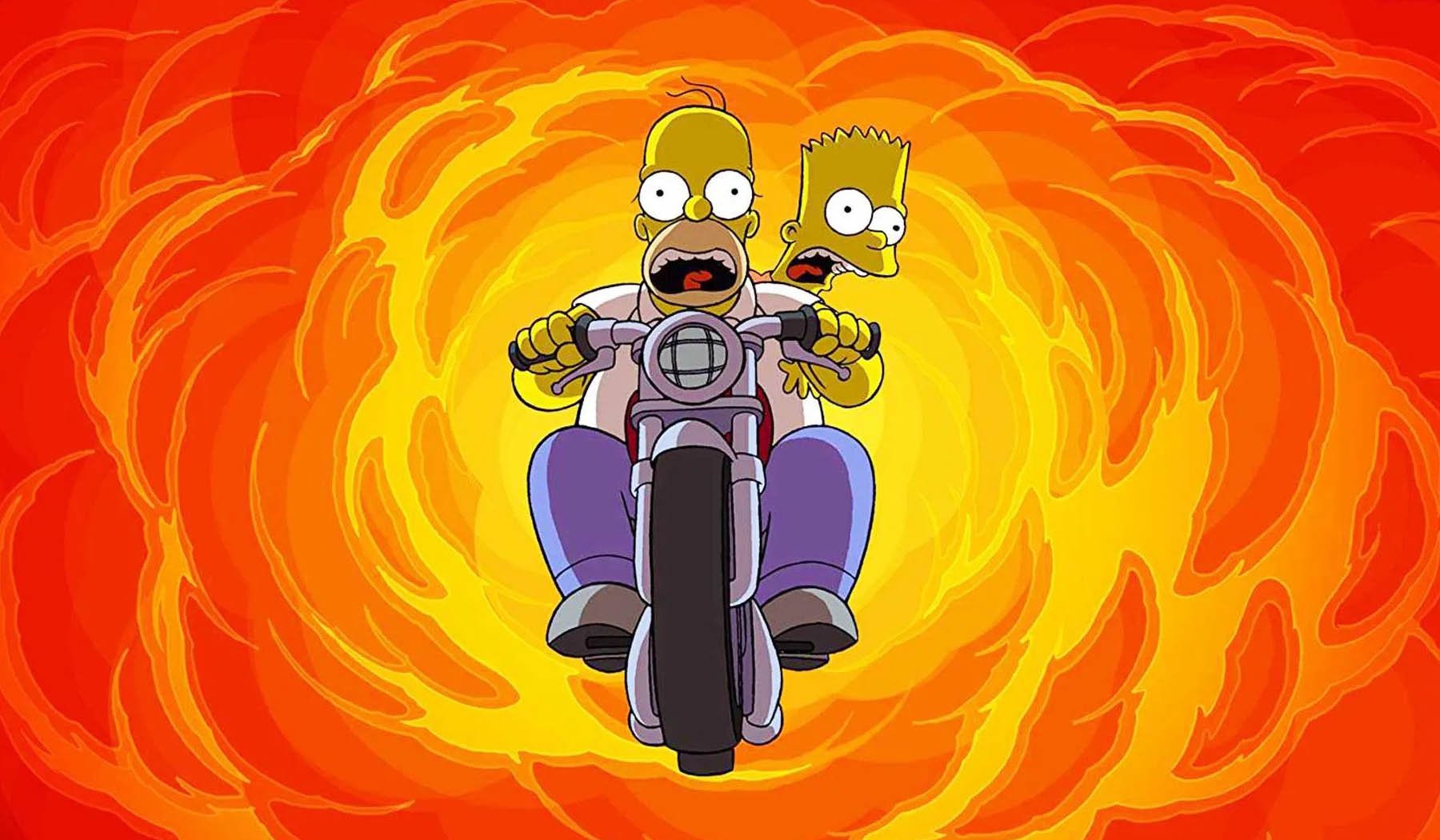 Despite popular belief, The Simpsons still matters. Those who’ve stayed the entire course have watched the show transform into something almost avant-garde: Its cutting social commentary and hilarious gags used to coast off cleanly delineated narrative through lines, where now the show’s humor ricochets onto audiences off idiosyncratic acts of storytelling tyranny. Its experimentations with form and function are not quite Dadesque, but they’re close. An episode from 2000 titled “Pygmoelian” largely concerns Moe getting plastic surgery but also features Bart and Lisa chasing a pink elephant around town and straight into a meeting for gay Republicans—a seemingly arbitrary bit of nonsense that connects succinctly with the theme of identity in which a person changes their face only to realize the efficiency of their old one. We may now consider this great episode a metaphor for The Simpsons Movie.

Because this movie has been a long time coming, its lack of actual movie-ness comes as something of a surprise. So, not quite cowabunga, but it’s still good, it’s still good! I was smitten as soon as Ralph Wiggum, pop culture’s purest and funniest expression of the id personified, appeared from inside the zero in the 20th Century Fox logo to sing along to the studio’s theme music, only to be taken aback by how little Matt Groening & Co. exploit the fact that the Simpsons are now tearing up the world in widescreen. Homer isn’t far off the mark for calling us a sucker for paying money to see what we can get on the small screen for free (just as you’d be a sucker for reading the rest of this review before seeing the film), but even if The Simpsons Movie doesn’t overplay its hand, trying as it does to appease fans of the show both old and new (the narrative though-line is as straight as an arrow, but the gags are as queer as all get-out), it is surprisingly aggressive in its engagement with our contemporary political malaise.

The movie begins with an Itchy & Scratchy sketch during which Itchy leaves his fellow astronaut Scratchy on the moon and returns to Earth to be elected ruler of the free world, with Hillary Clinton as his second in command. Itchy is cleverly seen as a distillation of 50 years of American political rectitude and aggression, from John F. Kennedy to George W. Bush. But while The Simpsons TV program celebrates Itchy’s butchering of Scratchy as an ongoing commentary of “wholesome” Walt Disney family values, TV violence, and the dangers of parental complacency, the movie considerably ups the political ante, afflicting the mouse with a rather humane sense of remorse for his natural-born enemy. This connects to a later scene, during which President Arnold Schwarzenegger (essentially Rainier Wolfcastle with brown hair) inspires our pity, regretting having delegated authority to his advisor, the string-pulling Cheney-esque monster who attempts to shoot Homer in the face by the end of the film, and not reading the literature that damns the people of Springfield to life inside a huge dome.

The Itchy & Scratchy episode is also a lubricant of sorts, easing one into the elaborate political discourse of the film, which begins with Green Day drowning in Springfield’s lake after lecturing the town’s citizens about global warming. (The hymn played at their funeral service is a cunning joke only the band’s fans and naysayers will get: “American Idiot: Funeral Version”!) This premise seems predicated on a line from my favorite episode of the show (“Lisa the Vegetarian”), during which Homer declares, “Rock stars—is there anything they don’t know?” The movie, like that episode, also features a pig in a very crucial role. Homer gives the hog a home, then a name (first Spider Pig, then Harry Plopper), before storing the animal’s feces (and some of his own!) in a silo that he dumps into Springfield’s newly conserved lake, thus transforming the town into an environmental hellhole. Before you can say “Katrina!,” Springfield is under the EPA’s lock and key.

The members of the Simpson clan fulfill familiar roles as agents of chaos and change within this nightmare: Lisa, strident in her political conscious and weak-kneed in the face of romance, tries to bring Springfield’s environmental woes to the attention of the city’s clueless citizens; Marge, a busybody with a tragically less refined sense of direction, senses warning in one of Grandpa’s psychotic ramblings; Maggie, whose wordless gifts of physical and mental ingenuity go largely unnoticed by the adult world, saves the day in unexpected places; Bart, whose newfound fondness for Ned Flanders is an excuse for a dynamite string of Freudian teasings (one joke aptly ends in a display of yellow balls—hello, PG-13 rating!), unconsciously catalyses everyone to action; and Homer, still a hypocritical dumbass, is ostracized by his neighbors for their tragedy and must arrive at a place of selflessness, no doubt fleeting, in order to redeem everyone.

Springfield’s crisis is both political and pop in its allusiveness, a parallel to New Orleans and an extended reference to John Carpenter’s Escape from New York, with people stalking the streets like zombies and Moe boasting about his self-appointed position as the town’s Emperor. Equally delicious: The immigrant Simpsons being given $1,000 when they arrive in Alaska for “allowing the oil companies to ravage the state’s national beauty” and the National Security Agency getting results—finally!—from spying on everyone’s phone calls. The movie understands how the nightmare of our current political state of affairs manifests itself in different areas of our social-economic life, which the writers convey through zesty hit-and-run bits of comic absurdity. My fav is the movie’s rebuke of right-wing opinions about the root cause of homosexuality, when Ralph, upon seeing Bart’s pee pee, immediately yells out, “I like men now!”

The more things change the more they stay the same: No TV show has ever acknowledged with such persistence the complicated role institutions like the church play in our daily lives and the wide-ranging emotions—skepticism, love, disrespect, hope—that are crucial to keeping families alive and going, and like the show, the movie complements its biting religious ribbing with its completely sincere belief in spiritual need. Schwarzenegger, seeking salvation, accepts his duty as President and tries to read the literature in front of him but is still unable to save Springfield from annihilation, the news of which sends Reverend Lovejoy’s sheep to Moe’s Tavern and the town’s drunkards to church—a sight gag that cuts deeper than no other in the film.

The movie’s subversive streak is not as acutely pointed as that of the great “Homer Bad Man” episode from 1994, nor does it ever break your heart like 1995’s “Marge Be Not Proud,” which ends with Bart understanding the importance of repentance, but it’s funny because it’s true, and like the show’s recent 24 spoof, it uses its pop savvy and narrative circuitry to emphasize the bonds that tie families together. One joke the show has long driven into the ground is the sight of Homer choking Bart with his hands. In the movie, Homer’s rage and its effects on Bart allow for the bittersweet understanding of compliance as a major part of our social conditioning. Sight gag transforms into gag reflex when Bart loses Ned’s favorite fishing pole and instinctively reaches for his neck, expecting the same punishment from his daddy substitute that he always gets from Homer. These bold yellow characters continue to verify our strength as people, families, and a nation, and their agelessness continues to stress that their journey, like ours, is an eternal act of learning. It may not be the best…movie…ever, but it’s the best…Simpsons…movie…so far.