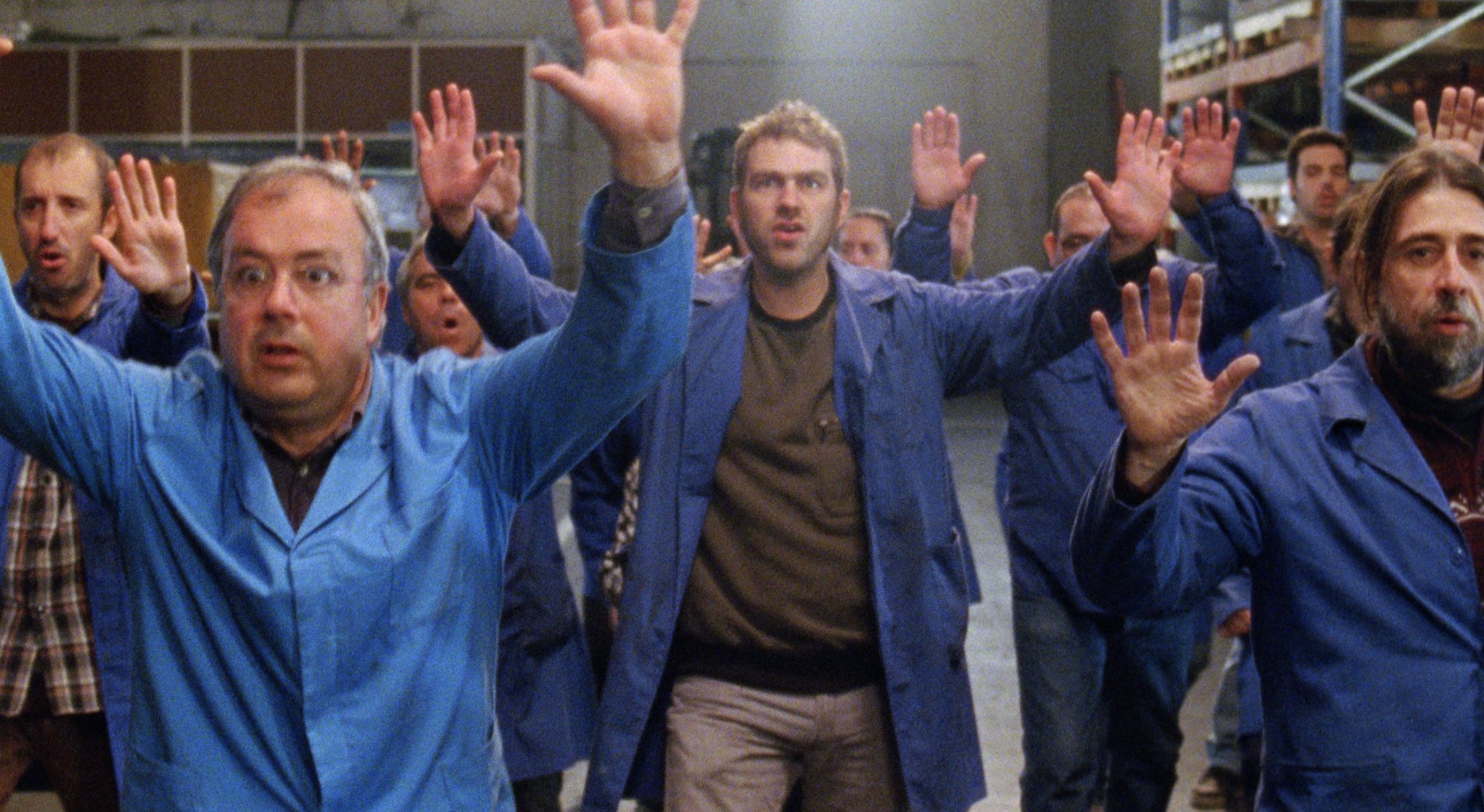 Pedro Pinho’s The Nothing Factory is a multilayered portrait—at once essay film, realist drama, and musical—of a Portugal ravaged by neoliberal austerity. An elevator factory is in crisis because everyone seems to be buying Chinese lifts for a third of the price, causing the company’s managers to enact a series of “adjustments”—a pretext for letting most of the workforce go. This premise is, as one of the film’s many professorial narrators tells us, emblematic of a historical time in which the state stops putting ointment on the backs of people and simply throws them into the sewers. The workers’ response is to strike and, ultimately, to self-manage. But as the factory’s bigwigs call employees into meetings, it becomes clear that the selfishness of some in accepting payoffs will ruin the chances for collective bargaining to prevail.

The film invites comparison to Jean-Pierre and Luc Dardenne’s Two Days, One Night, where factory workers choose individual bonuses over letting a coworker keep her job. The Nothing Factory also echoes a little-known gem by Brazilian filmmaker Leon Hirszman, They Don’t Wear Black Tie, whose fundamental conflict also lies in the confrontation between personal greed, sometimes perceived as necessity, versus group solidarity: in short, the home versus the factory. While Pinho alternates sequences featuring workers’ everyday lives (drinking, playing soccer, having sex, and getting their nails done) with scenes at the factory (from workers barring higher-ups from entering the building to an unexpected break into singing and dancing around their machines), there’s no clear protagonist here. Unlike the Dardenne brothers and Hirszman, Pinho isn’t interested in the dramatic dynamics of individuals or particular families. This tale of worker dissatisfaction is built around the purposeful absence of heroes. Its main character is the factory, a site of nothingness in lieu of workers ceasing to act as a collective.

This mighty yet precarious power of the group is most vividly illustrated in the many moments when workers discuss intellectual matters around a table, and while alternating—for some reason—between speaking French and Portuguese. Each person contributes to a highly sophisticated debate about collective survival. They argue about the logic of the commodity, machines, Marx, mass movements, micro decisions, ecologically sustainable capitalism, and alternatives to the barbarisms of the market. A lofty voiceover also tends to invade the film to let us know, for instance, that the crisis in Europe is “permanent and omnilateral,” that it signals the end of the bloc, if not the continent. When a character listens to the radio, another voice (that of a journalist or an economist) speaks about banks, scams, and liberalism—all of which gives us a sense that while political agency has been symmetrically allotted to every single character, they all seem so incredibly articulate about their plight that their conversations feel too much like lectures.

Such a cerebral approach works better during sequences that are less dependent on narrative and more essayistic in nature. As when a narrator explains the history of neoliberalism over images of a man alone in his room with his computer on his lap, black masking tape covering the device’s logo. Such scenes convey The Nothing Factory’s sociopolitical concerns more subtly and poetically than other moments in the film where characters expose their convictions to one another a little too pedagogically—at which point these individuals seem to be, rather ironically, reduced to verbose machines.