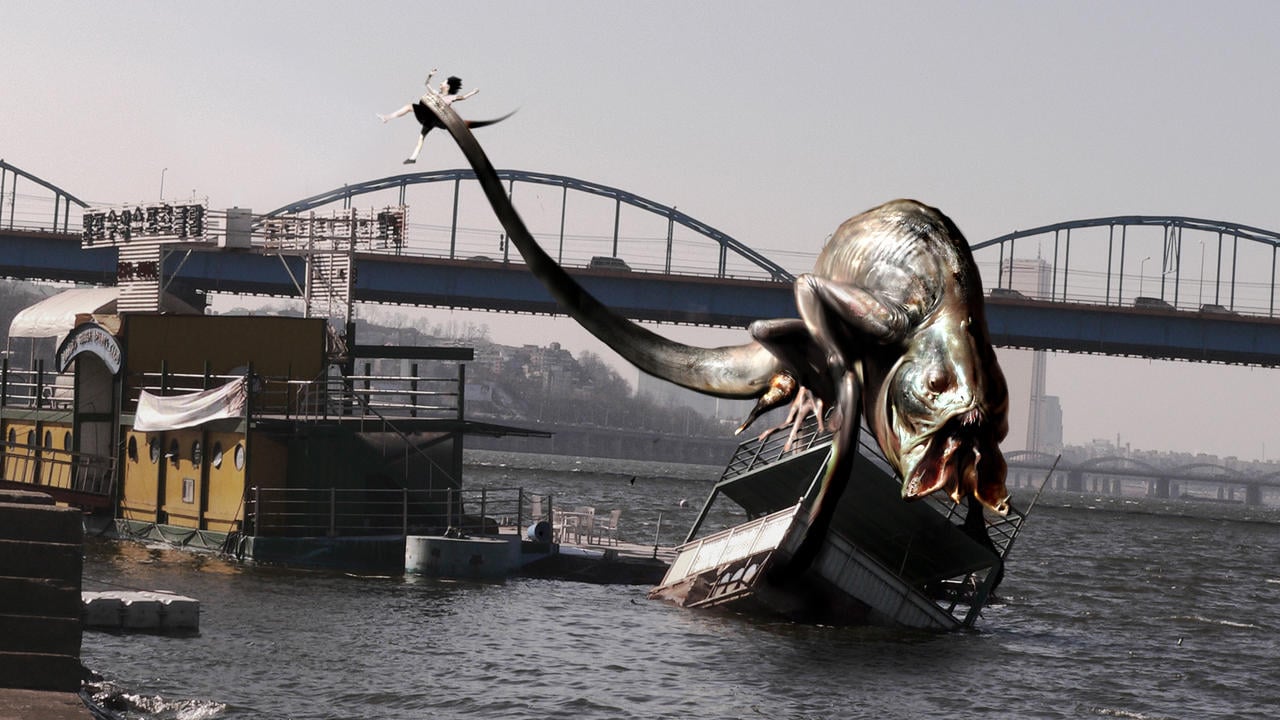 Scott Wilson’s deliciously hammy presence as the American captain in the opening scene indicates that Bong Joon-ho’s The Host is, in the broadest sense, a politically charged diatribe against both American and Korean political cover-up machinations of misinformation. But that aspect is rather bland in comparison to what else the film has to offer. For, like any great monster movie, this isn’t a film strictly about a monster (or, for that matter, the monstrous countries that spawned it), but about something else—like the significance of sustenance. That is, The Host is a movie chiefly concerned with food: who-how-where we get it from, what it is we choose to eat, and why we eat it at all.

To answer these questions Bong structures the film around a more pointed one: how is a family defined, and sustained? In the center of this disaster, the Park family is built around its pair of fathers, their paternal responsibilities to provide protection, love, and food, and the family food cart, on the banks of Seoul’s Han River. For all their quirky-go-lucky characterizations, the Parks do not fall into self-parody because the melodrama in The Host, like all great horror films, is grounded in a particular humanism striving to overcome all the supernatural chaos infecting the protagonists’ reality. Their frailties are not plot contrivances; they are simply flawed. What draws them together is the bright, young Hyun-seo (daughter of pie-faced Gang-du), who is kidnapped by the fishy monster the title alludes to in the film’s perfect opening action sequence.

As a host, the monster is a vessel, and a facilitator—it carries things. Lacking arms, it uses its pretty-in-pink lotus-petal chompers and slimy tongue to tackle and transport its spoils. And boy does it have an appetite. Or so it seems to those too busy screaming and running. In fact, it does not gather to eat right away. Rather, it sucks up people to carry them home where it regurgitates them for storage in a remote cavern to, just maybe, consume later: it’s a bulimic’s worst nightmare. Still, the host is hungry, and out to eat, to chew the scenery as much as people.

The Host opens with a monster attack so visceral and so smart it almost imbalances the film. I kept waiting for the other foot to drop, as with the mid-movie meltdown of Spielberg’s War of the Worlds, yet that dead-in-the water turning point never comes. The film, while messy, is rather perfect in its execution, akin to a few choice early Spielberg films. But forget Spielberg for a second: the best moment in The Host is straight out of a Bergman chamber piece, complete with a magical apparition. True, The Host thrills much like Jaws (consistently, to the end), but there’s something else at work here besides that dynamite third act so many recent Spielberg films have lacked. It’s a film about family, resilience, horror, love, and food. It is hardly one note, or tidy. In fact, its mess is one of its virtues. Such reckless abandon, which is mirrored in the havoc of the monster’s presence, affords the film the right to risk its credibility on a few fantastic moments that, if mismanaged, would fall flat and empty, deflating the third act’s pay-off resonance. More than one scene begins with true pathos and ends in howling comedy. Or, moves from slapstick to horror to giddy action then back to comedy before settling on mournful resignation. Despite switching tones frequently and abruptly, The Host runs along this tightrope high wire throughout and, thankfully, it holds its footing, due in large part to its rather obvious obsessions with consumption—of goods, of countries, of people, of food.

Such weight is given to the importance of food that it intrudes even on action scenes, like in the opener when Hyun-seo (Ah-sung Ko) kicks a beer can and watches it fizz empty, metaphorically signaling her fate and linking it to food. (When asked what kind of food she wants most later in the host’s cavern, Hyun-seo looks straight into the camera and replies, “Beer. A cold beer.”) Near the middle of the film, in the midst of the search for Hyun-seo, Gang-du’s medalist archer sister, Nam-joo (Du-na Bae), asks, “How long do you think it’s been since she last ate?” This question prompts the family’s return to their food shack caravan for a moment of respite to stuff their faces. The four Parks (Gang-du, his sister Nam-Joo, his unemployed drunk brother, Nam-il, and his gruff father, Hie-bong) sit around a squat table covered with garish snacks, wrapped and naked alike, that we Americans rarely, if ever, eat (but still look at salivating). While Hie-bong pours hot water into his children’s ramen bowls, one senses their thoughts remain with the missing girl: a mixture of guilt and remorse and silent desperation plays across their stonewall faces. After all four bowls are filled, there’s a reverse shot cut to an angle above the table showing the family sitting in silence waiting to eat, holding their respective lids down, trapping the hot water and steam, biting their tongues. Bong holds this shot for the rest of the sequence.

As the family members open, and begin devouring, their ramen, a small hand appears on Gang-du’s (Kang-ho Song) shoulder. We see the hand is connected to an arm, which is connected to a body, which is the body of Hyun-seo, there, in the caravan, joining their meal. Instinctually, the family begins to feed her—first her father, then her aunt, then her uncle, then her grandfather, all counter-clockwise—stuffing her face, all in silence. She’s smiling and can barely fit all the food into her small mouth. Each family member looks in love and awed. Each puts a hand on Hyun-seo’s fragile body. It’s one of the best communion scenes ever filmed.

Bong’s fluency in these personal moments, in the quiet, set his film apart, like Jaws before it, as made of something stronger than a thin, generic rampage plot. As I compared this communion scene to something out of Bergman (say, the magical escape scene in Fanny and Alexander), The Host truly does inherit more key traits from Jaws, such as family and redemption, which can found in the whole of Spielberg’s work. However, Bong risks an ending here that even something as great as Jaws would not dare; which, along with the thematic exploration of sustenance’s existential importance, distinguishes The Host as something special: it has the gumption to meet the challenge of the genre head-on and do its messy best to rewrite its concerns and outcomes. With The Host now available on Region-1 DVD you can program your own home-theatre double bill and see for yourself how well the films play with one another. Be sure to pause for snacks.

5 for the Day: Peter Lorre