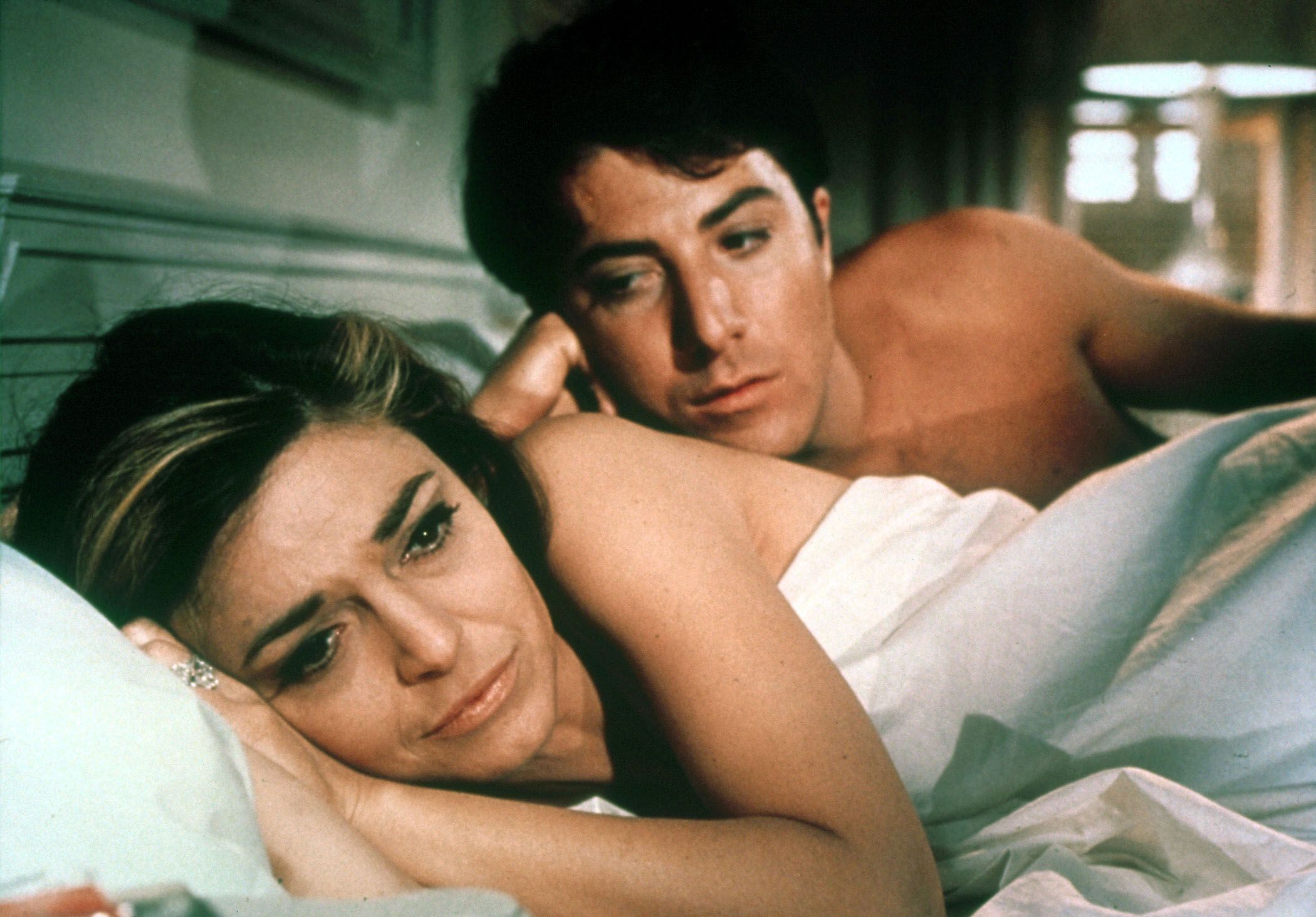 Valedictorian as well as class clown, The Graduate owes its formal experimentation to the influence of the French New Wave, actor-friendly use of long takes to director Mike Nichols’s background in theater, and archetypal May-December sexual initiation scenario to its WASP-baiting source material. The film announces its theme with the very first line of dialogue, spoken over the PA by an airline pilot: “Ladies and gentlemen, we are now descending into Los Angeles.” La La Land is the plastic inferno where the future presses in on young Benjamin Braddock (Dustin Hoffman) with all the overbearing insistence of the party guests who waylay him with brays of “Proud! Proud! Proud! Proud! Proud!” Cut off from his peers and past achievements by the breadth of an entire continent, the only place Ben can feel at peace is floating in a scuba suit at the bottom of the backyard pool.

Buck Henry and Calder Willingham’s screenplay mixes this existential study in anomie with finely tuned sex comedy in the person of imperious Mrs. Robinson (Anne Bancroft). Her leopard-print attire as seen against the profuse verdant foliage outside her sunroom window gives the seduction scene a predatory (even proto-“cougar”) quality, with Mrs. Robinson emblematizing what Henry James called “the beast in the jungle.” Less interested in the fluidic facts of getting fucked that dominate teen sex comedies from Porky’s to the American Pie franchise, The Graduate wants to examine varieties of discomfort. Ben’s famous line “Mrs. Robinson, you’re trying to seduce me!” is followed by the far less categorical “Aren’t you?” By insisting on that tentative second beat, The Graduate plays up its greatest strength, a lingering sense of disconnect and doubt, as in the prolonged two shot on Ben and Elaine (Katharine Ross) after their escape from the wedding chapel while their faces go from elation to that uncertain feeling brought on by the enormity of the future they now face.

Throughout the film’s opening stretch, Hoffman registers Ben’s pent-up discomfort with a series of little mewling whimpers, and reveals a true gift for understated physical comedy in a very funny scene with Henry as a hotel desk clerk. Bancroft specializes in extruding just enough of the vulnerability underlying Mrs. Robinson’s steely façade, never better than in the scene where, with one curt revelation, she lays out the character’s entire history of diminishing expectations. Ross takes an underwritten character whose actions and vacillations often veer dangerously close to the contrived and makes us believe her charms as well as her capricious whims. Even secondary characters like suspicious landlord Mr. McCleery (Norman Fell) and cuckolded Mr. Robinson (Murray Hamilton), though drawn broad and flat as cardboard cutouts, manage to transcend this one-dimensionality through their actors’ adroit comic timing. Hamilton’s delivery of the line “You’ll pardon me if I don’t shake hands with you!” is riotous. Look for Richard Dreyfusss as an extra among the bystanders in the boardinghouse, working his one line (“You want me to call the police? I’m gonna call the police”) for all it’s worth.

Nichols and veteran cinematographer Robert Surtees threw out the DGA playbook for The Graduate, experimenting wildly with lighting and lenses, lending the film a sense of freewheeling freshness, a sheen of visual inventiveness that hasn’t dimmed over the years. Handheld shots, exceedingly rare in those locked-down days, convey the obnoxious flesh-press of Benjamin’s graduation party, as well as the frenetic chaos of the climactic wedding chapel fray. In the opening scenes, Benjamin is consistently framed in angsty isolation against blank backgrounds—white voids in the plane and airport, the watery azures of fish tank and swimming pool—using the widescreen Panavision frame to pin him in place like an entomologist’s latest specimen.

Nichols and Surtees avail themselves of the format’s sprawling horizontality for telling deep-focus, multi-character compositions like the one that positions Ben and Mrs. Robinson at the extreme edges of the shot, embodying the emotional distance that separates them. When Ben reveals the secret of his clandestine affair to Elaine, the camera discovers a rain-drenched Mrs. Robinson in the doorway behind her, racking slowly from mother to daughter as the truth dawns on Elaine. After Elaine throws Ben out, there’s a cut to Mrs. Robinson, the camera slowly zooming out from her exultant face to discover her figure huddled in a corner, black widow’s weeds in startling contrast to the all-white décor, ending on Ben as he unhurriedly turns to the camera and the shot gradually fades to black, a virtual portmanteau of cinematic effects.

Nichols did things with sound that were pretty unconventional too, like using preexistent pop music to convey mood and texture. Granted, that’s something done to death over ensuing decades, but almost never with the same generosity; nowadays, a steady barrage of soundtrack-friendly hits cue emotional response with overweening Pavlovian precision. Nichols gives the music room to speak for the characters, letting Simon and Garfunkel’s folksy songs play out in their entirety as they alter the atmosphere from the satiric brio of “Mrs. Robinson” to the lovelorn lament of “Scarborough Fair.” Nichols and editor Sam O’Steen often use the music to shape their montages as in a sequence that equates Ben’s growing boredom with his parents’ idle chatter and his affectless affair with Mrs. Robinson, leading up to an outrageous match cut between Ben emerging from the pool and leaping onto his raft to a shot of him landing atop Mrs. Robinson.

Review: How to Grow a Band