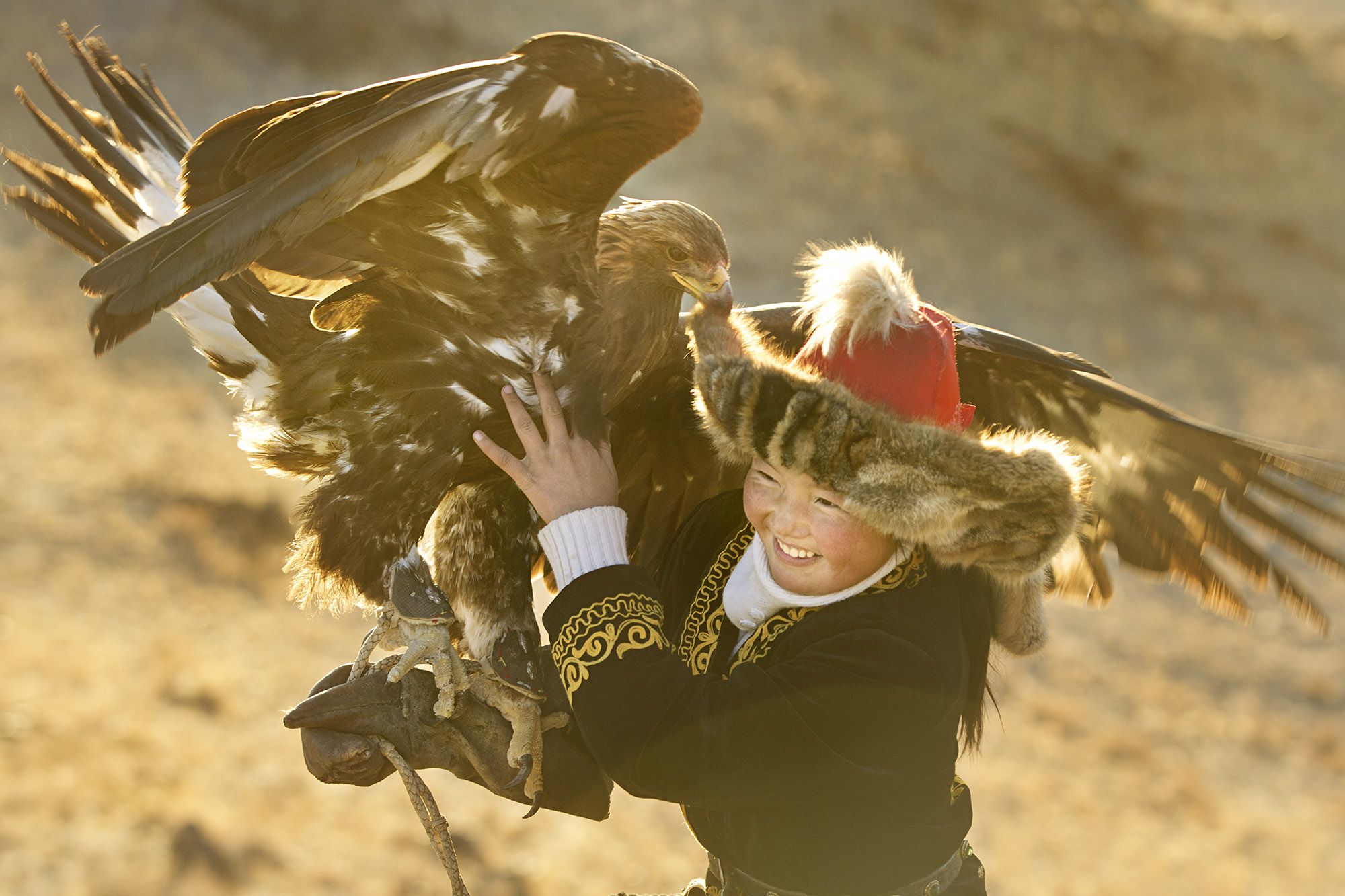 In the Mongolian steppe, against the backdrop of the Altai Mountains, Kazakh tribesmen have perfected the art of eagle hunting over the centuries. Kazakh society on the steppe continues to be rooted in a traditional nomadic lifestyle, one that revolves around herding livestock and living in temporary shelters for most of the year. Otto Bell’s documentary The Eagle Huntress captures this world in a state of transition, where the younger generation of this society is beginning to embrace aspects of modernity while maintaining the traditions and customs of their culture. A symbol of the profound changes taking place in this deeply patriarchal society is Aisholpan, a 13-year-old Kazakh girl that dreams of becoming both a great eagle hunter and a doctor.

The film’s pristine cinematography captures the barren steppe in all of its austere beauty. At times, The Eagle Huntress feels like a nature documentary, which is apt given Bell’s intention to capture a world where humans are dwarfed by their surrounding landscape. The filmmaker wisely lets the terrain provide much of his subject’s backstory. The scenes depicting Aisholpan’s domestic life and her efforts to capture and train a golden eagle speak to the influence that ancient traditions continue to exert over this society. But the stationary shots of the harsh weather and untold miles of empty distance do even more to reveal to what extent this landscape keeps modernity at bay by maintaining this culture in physical isolation from the outside world.

Bell establishes this sense of physical isolation and cultural stasis to emphasize the radical nature of Aisholpan’s actions. In attempting to become her society’s first female eagle hunter, the girl is challenging hundreds of years of unbroken tradition. Aisholpan is a happy child whose radiant smile never seems to leave her sunburned face. Bell shows her confidence and courage in several stunning scenes that see her overcoming both physical and social obstacles to achieve her goals. She’s equally unflappable in scaling a steep cliff to capture a golden eaglet as she is in facing her much older, all-male opponents at the Golden Eagle Festival, a yearly competition that brings together the greatest Kazakh Eagle hunters.

Still, the film shows us that her success wouldn’t be possible without the support of her family, particularly her father, who trains her in this traditionally masculine art against the wishes of many male eagle hunters within the community. The Eagle Huntress’s quiet feminism, which never comes across as an overt political agenda on the filmmaker’s part, offers an object lesson in how to overcome social obstacles and cultural prejudices without alienating those whose authority such actions challenge.

Aisholpan’s liberation, though, is also a harbinger of the growing pressure that the outside world exerts on this once isolated community. Bell is savvy enough to understand that her breakthrough is a double-edged sword. He shows discontented eagle hunters complaining that Aisholpan’s success is merely a publicity stunt man meant to attract outsiders to the Golden Eagle Festival and thereby increase tourism for economic gains. The filmmaker seems to at least tacitly support their implication that this progressive gesture represents both the decadence of the sport and an admission on the part of the festival’s organizers that they must appeal to a liberal Western gaze if the sport is to continue to thrive in the modern world.

Bell implicates himself in his gaze, albeit perhaps not enough. He shows the many foreign tourists at the festival as stand-ins for the film’s viewers. Their awkward presence, as well as the complaints of some of the competitors, somewhat tempers the film’s triumphal message about female empowerment, implying that some things must be lost in order to make way for progress.

Review: Into the Inferno

Review: The Edge of Seventeen