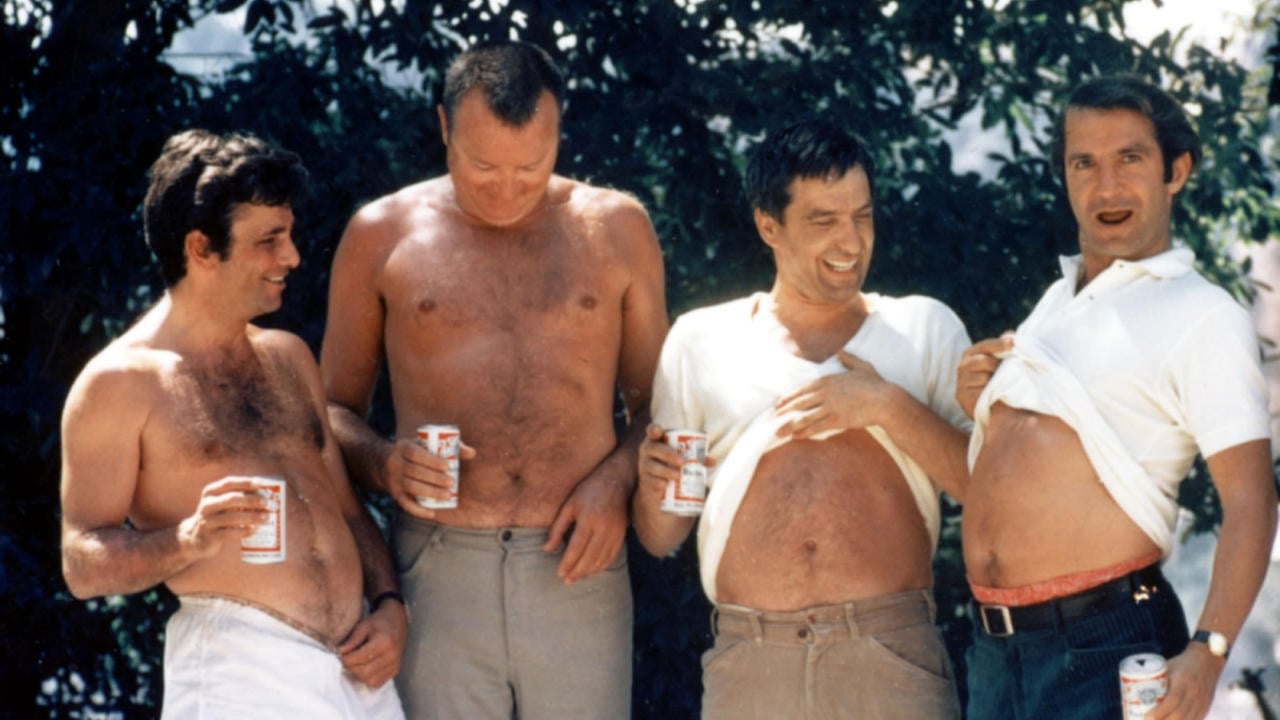 On September 21, 1970, television viewers beheld Dick Cavett welcoming John Cassavetes, Peter Falk and Ben Gazzara to the set of his show. Cavett initially describes them as “three animals” and before long their behavior supports his claim. They were there to promote Husbands (1970), a film directed by the notoriously unorthodox Cassavetes and starring all three of them. Cavett’s questions about the film failed to penetrate the barrier of their rowdiness and the show quickly transformed into farce. A cigar-chomping Gazzara dances absurdly, Cassavetes lifts Falk over his head, Gazzara kisses Cavett, everyone screams over one another, the three guests wrestle as their amused host disappears from the set, and every so often this spectacle is interrupted by commercials whose constrained insincerity contrasts sharply with the trio’s vitality.

Despite the theatrics, this “interview” occasionally yielded some insightful moments. Falk asked the audience if they could identify the difference between sentiment and sentimentality (Husbands, in his view, was an unsentimental depiction of men grappling with sentiments) and Gazzara praised Cassavetes as the “most open filmmaker” he’d ever worked with. A nervous Cavett struggled to get them to discuss the film’s contents without realizing that he was essentially watching the film unfold right there on his set. Cassavetes, though reluctant to speak about his work, ultimately delivered a line that might indeed summarize his general purpose: “We don’t care, really, what you think of us, except that we want to express ourselves the way we want to.”

Husbands was not a critical or commercial success, unlike its predecessor, Faces (1968). It finally surfaced on a long overdue DVD release in August, delivered from the purgatory of films neglected by the digital age. The amount of enjoyment one derives from it is directly proportional to one’s patience. The meandering narrative portrays the mood swings of three confused men and will likely elicit equally unstable emotions in the viewer ranging from awe to frustration. Cassavetes opted for emotional exploration over narrative presentation and the uneven result of this noble purpose was perhaps inevitable.

The death of a friend plunges three middle-aged suburbanites into anxiety and doubt. Gus (Cassavetes), Archie (Falk) and Harry (Gazzara) find themselves concerned about the deterioration of their bodies and the deterioration of their happiness. They mourn by dousing their pain in booze and reenacting a youth no longer conceivable. Their attempt to reignite their daily routine goes awry when Harry violently confronts his wife, an encounter that prompts his rash decision to leave the country. His friends, emboldened by this brazen escape plan, decide to accompany him. They prolong their carousing in London, the stretch of the Atlantic protecting them from the domesticity and responsibility they have grown to despise. They drink, they smoke, they laugh, they mope, they gamble, they chase girls, they exchange monologues. Two of the three return, although none of them want to.

This narrative unfolds with an intimacy many independent films strive for and fail to attain. We might generalize the Cassavetes method as leaving everyone to their own devices, from the actors to the director of photography. This anarchic environment usually resulted in films that possessed the aura of cinéma vérité, highlighted by the fact that the actors often go out of focus as the camera adjusts to their movements. Falk observed during the interview with Cavett that the notion that the films themselves were improvised is a “common misconception.” Cassavetes developed a solid script out of initial improvisations with the actors and they tried to adhere to it during the shoot. He offered deliberately ambiguous directions that sometimes went awry in the visible moments of confusion one can detect in the actors. This confusion arguably enhances the film’s authenticity. Husbands resembles a documentary not only in style, but in how it records the actor conjuring the emotions of an imaginary person as well as the confusion that such an arduous process can engender.

The editing process further complicated the nature of this production and the distributed version of Husbands is not necessarily Husbands. Cassavetes shot an enormous amount of footage during the production, leaving him with miles of material to sculpt into a film. The original cut was apparently a crowd-pleasing success with test audiences. Such a reaction terrified Cassavetes, who assumed he had missed the material’s emotional core, so he retreated to the editing room to find it. Therefore, if some of these scenes suggest outtakes that would have been omitted from any other film, it may be because they replace some narrative-driven material that Cassavetes sacrificed for the sake of emotional authenticity. He sacrificed brevity as well, hence the oft-cited complaint that the film is too long. Consider the lengthy scene in a bar in which the boys hold a drunken singing contest with other patrons, only to retire to the men’s room to vomit extensively. Cassavetes must have included it because he felt that it tightened that crucial emotional thread, but it alienated audiences at the time and even prompted walk-outs at some theaters.

Although this version comes close to prioritizing the three characters equally, the film ultimately belongs to Gazzara, whose volatile portrayal of Harry unleashes an energy most of the scenes lack. He twice attempts to assault Archie and even attacks a phone booth in a bar. With tragicomic candor, he stumbles drunkenly around London in a frilly tuxedo shirt, exclaiming aloud that his heart is breaking. Harry is the only husband to interact with his wife onscreen, a scene that ranks as one of the most startling and violent moments in any of Cassavetes’s films. His wife threatens him with a knife as his terrified mother-in-law watches. He eventually strikes both of them viciously. The women flee up the stairs while Archie and Gus restrain Harry as he attempts to crawl after them. Never again is the film so tense, so savage, or so spontaneous, because this brutality between husband and wife, alternating from the emotional to the physical, is the Cassavetes method working to perfection.

Cassavetes’s oeuvre mostly contains polarizing films destined to frustrate some and inspire others. He won the status of “maverick” by demonstrating, with significant tenacity, that you could make a film without sacrificing its honesty to Hollywood formula—as long as you are willing to face the difficulties common to exploration, as long as you are unafraid of amateurism and as long as you are willing to fight not only against the commercialism of the Hollywood system, but also against the artifice that naturally arises from a collaborative art like film, an artifice that threatens to smother beauty with cliché, unless one battles against it (or finds a way to use it). One gets the sense of this battle in one of Husbands’ longest scenes, the infamous singing contest. After an exchange of many songs and many drinks, one woman begins to sing, her flat performance infuriating the trio. They force her to begin again and again. During one of her attempts Harry bellows, “Too cute. No cute. Real! From the heart!” This, of course, is the key to Cassavetes. To be worth a damn, the material must avoid insincerity. It must emanate from the inconsistencies of the heart.