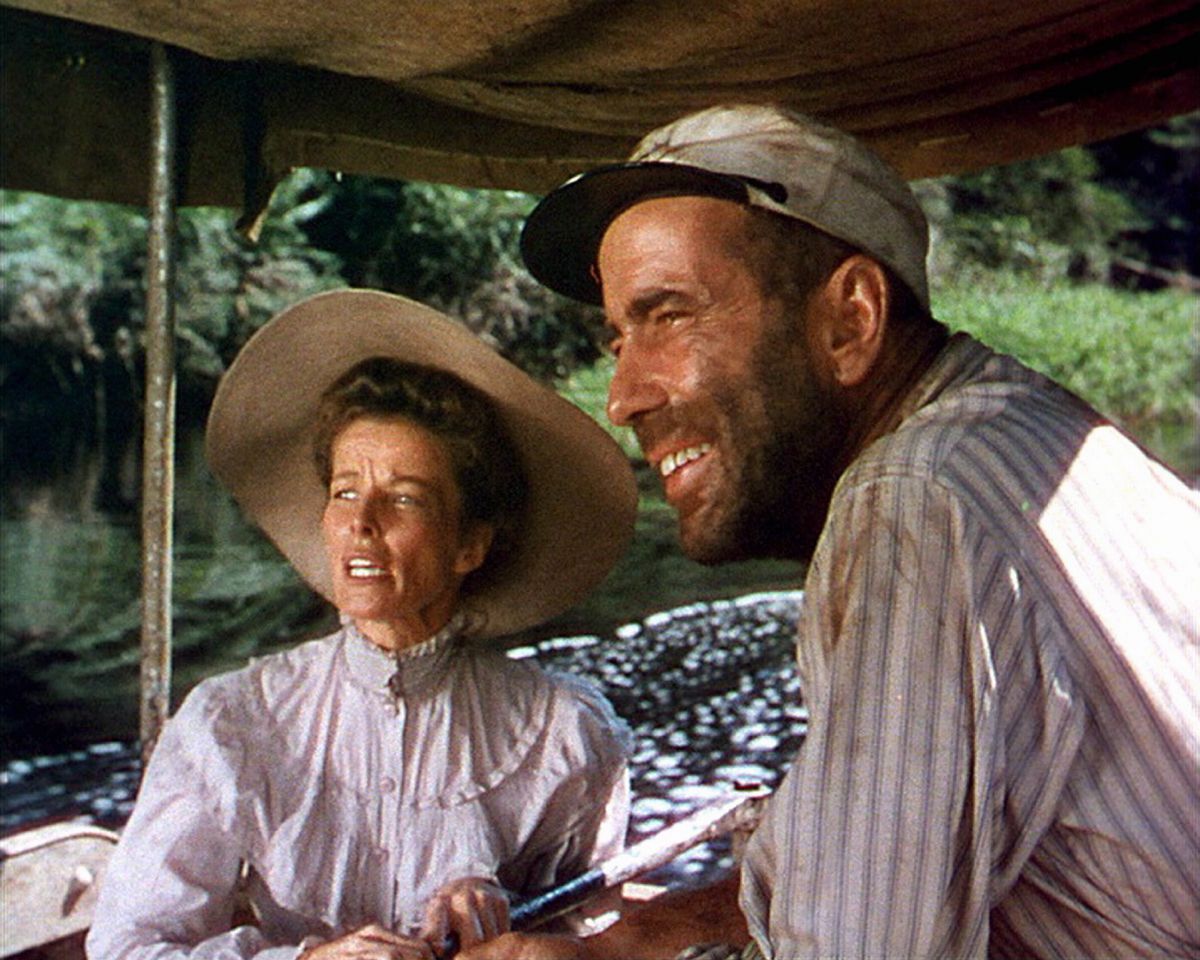 Star vehicles have been a part of the Hollywood assembly line practically since its inception, but few have utilized (and literalized) the concept to such beloved effect as The African Queen. Really, what is the idea behind John Huston’s 1951 adventure-romance other than putting Humphrey Bogart and Katharine Hepburn on a riverboat in Africa and see what happens? The world becomes reduced to the clanky titular ship and some passing jungle mise-en-scène, an elemental landscape in which Bogart’s worldly wisecracks and Hepburn’s clipped pronouncements can flourish beyond the captivity of ornate plot mechanics or, for the most part, other characters. Its modesty of ambition makes The African Queen among the least complex classics of Hollywood’s waning “golden age” (for a movie with a World War I setting and a colonialist context, it offers little interpretive earth to excavate), but leaves plenty of time for Huston and company to lovingly appraise the personae of two Tinseltown darlings.

The lead’s performances are undoubtedly of the star-turn variety, making little effort to conceal their trademark mannerisms. (Hepburn and Bogart are somewhat hilariously cast as British and Canadian, respectively, though barely a trace of an accent is present to cloud either her starched New England flatness or his booze-and-smokes gravel.) But they’re not resting on their laurels either. The African Queen also finds them toying around with their on-screen personalities, puffing them up with winking good humor or stripping them to their core. Bogart undoubtedly takes the former route as Charlie Allnut, the gin-guzzling captain of the African Queen. His ruddy if haggard visage covered in unkempt whiskers, Bogart’s Charlie is full of life-on-the-river debauch yet endearingly tentative, his face frequently crinkling into a look of shoulder-shrugging apology. Bogart slyly draws upon his past performances here—men of weary-eyed cynicism and faded idealism—to give Charlie’s rudderless existence an extra-textual charge. Could this be where Rick Blaine ended up after he strolled off into the mist, or how Sam Spade ended his days when the cases stopped coming across his desk? That Bogart finds so much humor in Charlie’s goofball debasement only adds to its poignancy.

Hepburn’s Rose Sayer appears less of a stretch for an actress known for her portrayals of tightly wound go-getters, and Hepburn does not defy expectations so much as fulfill them with bracing force. The buttoned-up sister of a white preacher (Robert Morley) proselytizing in Eastern Africa, Rose joins Charlie on the African Queen after an attack by German soldiers leaves the village decimated and her brother in an eventually fatal state of shock. She predictably turns up her nose at Charlie in the early-going, looking down on his drinking and slovenly demeanor and insisting upon the use of formal titles while on the ship. (The way Hepburn, in her unmistakable Yankee cadences, repeatedly calls out for “Mistah AWL-naut” becomes one of the film’s best running gags.)

Her iron will, however, quickly extends beyond merely enforcing gender propriety. Charlie, who plans on waiting out the war in a boozy stupor, casually mentions the presence of a German gunboat, the Louisa, down river. Rose’s eyes light up, and after a quick scan of the boat’s components, devises a plan: construct some makeshift torpedoes and blow up the Louisa by running the African Queen straight into the enemy vessel. Ostensibly an act of vengeance for her brother’s demise, Rose’s plan comes across more vividly as the manifestation of her almost comical indomitability. This steadfastness, in turn, feeds off Hepburn’s own reputation (on screen and off) as a no-nonsense unbreakable spirit. She sketches Rose with strokes at once broad and sharp, underlining her famed tenacity while slicing away any superfluous layers until all that remains is raw resolve. The result is a performance as sinewy and unpretentious as Hepburn’s bony figure (always thin, she dropped roughly 20 pounds after falling ill during the film’s infamously calamitous shoot).

Their voyage encounters a fairly standard-issue set of blockages, including a run-in with German snipers and three—count ‘em, three—hairy navigations through wild river rapids and unexpected waterfalls. Setting aside the inevitably dated quality of these heavily rear-projected scenes, the action sequences, while handled with old-pro professionalism by Huston, are not where the director’s heart seems to be within the material. His filmmaking eye seems much more enamored with the jungles of Uganda and Belgian Congo (now the Democratic Republic of the Congo), whose verdant foliage and golden yellows were captured with rich Technicolor by cinematographer Jack Cardiff. Their textured tones look ripe enough to pluck off the screen in the film’s painstaking new 35mm restoration, but attention must also be paid to the darker hues, which gain a striking, inky blackness in the new print. A scene that finds a grieving Rose sitting under a porch overhang midday is an arresting portrait of sorrow, the frame’s expressive use of shadow as crucial as the way Hepburn’s bereft face both refuses and threatens to become lost within it.

Huston relishes in his hard-fought location footage, even if he ultimately views it in terms of how it affects the Charlie/Rose relationship. (That being said, he cannot resist throwing in a few get-your-money’s-worth inserts of howling monkeys and slithering crocodiles.) The jungle’s character changes over the course of the film, moving from a picturesque if demanding landscape to a milieu more defined by impersonal hardships than visual opulence. Charlie and Rose pull over to the shore to spend the evening, only to get attacked by a nasty swarm of mosquitoes, their unceasing buzz dominating the soundtrack for an unnervingly long stretch. Later, they work their way through a section of the river that’s more mud than water, with Charlie pulling the boat in an image of Sisyphean hopelessness. All seems lost, and Huston lingers on a moving image of Hepburn as she offers one final prayer for their place in heaven before lying down in Bogart’s arms to die. The African Queen is too light an entertainment for such moments to gain too much weight, but Huston understands the majestic savagery of his surroundings well enough to let it exert some dramatic pressure on what is primarily a buoyant romantic comedy.

Indeed, the thought of Charlie and Rose perishing on the dirty deck of the African Queen feels at once tragic and oddly appropriate, given both how skillfully Hepburn and Charlie have shaded their burgeoning romance and how connected the couple’s Edenic bliss feels to their natural surroundings. Their romance begins not in an intimate clinch, but as the culmination of near-death experience: a narrow escape from the rapids that leads to an excited smooch. The speed with which these seemingly opposite figures fall for one another strains plausibility, offering little in the way of tangible erotic connection. (Bosley Crowther, not exactly known for his strong opinions on cinematic hanky-panky, dubbed their canoodling “perhaps the screen’s least lustful and least likely seduction scene.”)

What they lack in heat, however, is more than made up in warmth. Scene after scene showcases little more than playful banter, nuzzling, and touchingly mild breakthroughs in intimacy—no more so than the first time Rose tentatively replaces the formal “Mr. Allnut” with “dear.” What Hepburn and Bogart find in these scenes is the rich pleasures of affectionate camaraderie— the joy of unexpectedly finding one’s equal—and it has everything to do with the slippage that occurs between character and actor. We know that Bogie only had eyes for Bacall, and Kate would never dream of betraying old Spence. To see them gaze into one another’s eyes and onto one another’s bodies with such relaxation and generous humor, then, is to witness the delight of a semi-improbable and thoroughly winning collaboration. That it occurs as both stars found themselves middle-aged in a young person’s business (Bogart was in his early 50s during the shoot, while Hepburn was easing into her mid 40s) only enhances their characters’ appreciative emotional bond.

Both had gone deeper before, and both still had better work ahead of them. But to watch Charlie pretend to be a hippo so he can get a laugh out of Rose—that is, to consider how gratifying it is to watch Humphrey Bogart act like a seventh-grade class clown, and infer how delighted Katharine Hepburn seems to be while witnessing this—is to let oneself appreciate one of filmgoing’s simplest pleasures. He looks, then she looks; she laughs, then he laughs. We’re just happy to be there.

Review: Just Go with It