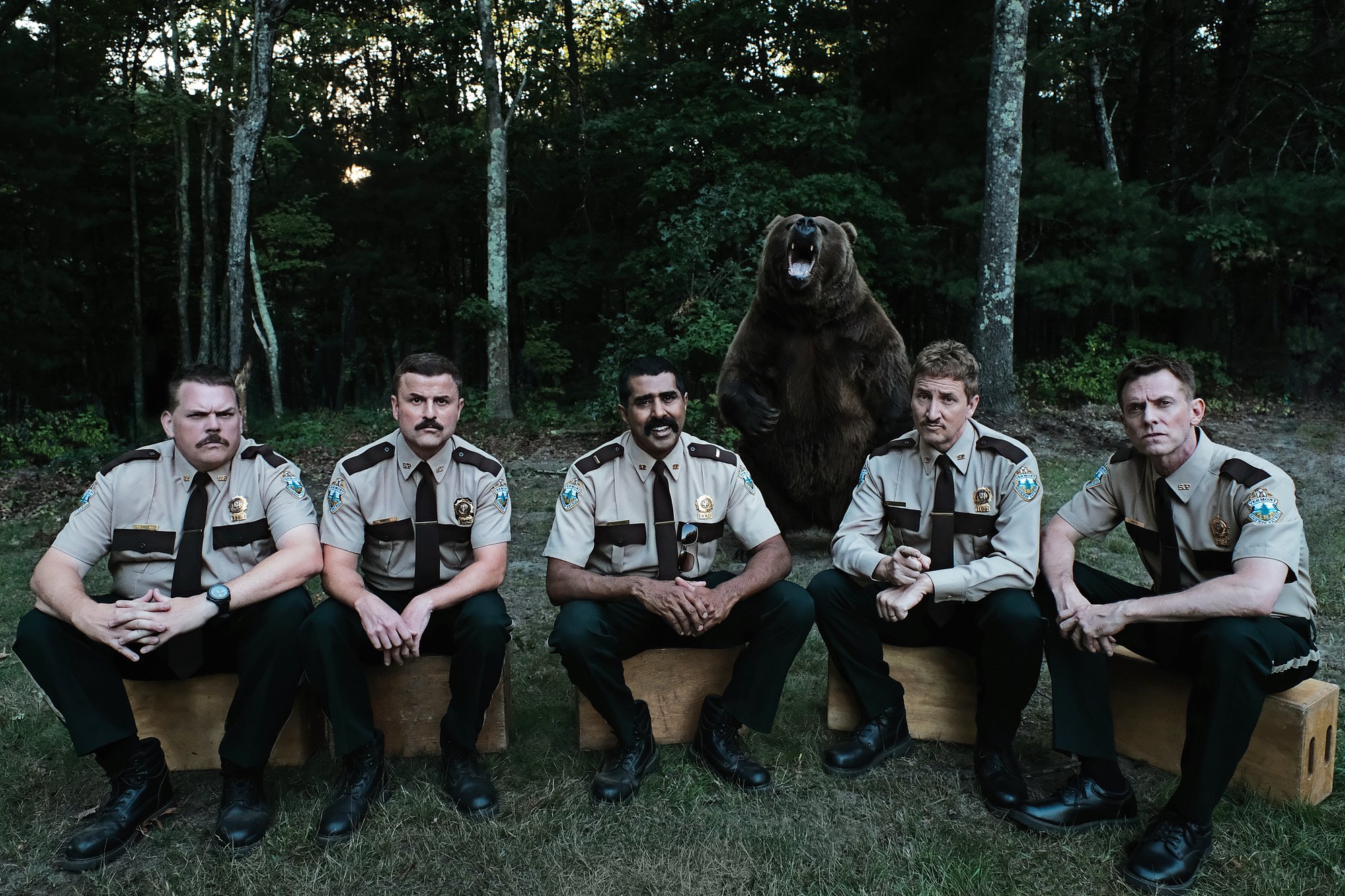 Throughout Super Troopers 2, characters obliquely refer to Fred Savage having done a ride-along with them, a disastrous incident that occurred some time between the end of the first film and the start of the second. The event is repeatedly mentioned, but we don’t know what happened, exactly, on that fateful day for the better part of the film, only that it was bad enough to get Thorny (Jay Chandrasekhar), Foster (Paul Soter), Mac (Steve Lemme), Rabbit (Erik Stolhanske), and Rod (Kevin Heffernan) thrown off the police force. The incident is finally shown at the very end of the film, and after such a long build-up, we’re offered the sight of Savage bantering with the guys a bit, climbing a tree, falling out of it, and then abruptly getting hit by a fire truck. And that’s it. The scene is quick, violent, broadly played, and proudly dumb. In other words, it’s the perfect synecdoche for Super Troopers 2 as a whole.

It’s been over 15 years since the original Super Troopers introduced us to Broken Lizard’s eminently silly brand of fratty shenanigans, becoming a requisite fixture of every suburban American high schooler’s DVD rack along the way. Flash forward and the Broken Lizard boys are up to their old tricks, only this time in Canada. Thanks to a rather implausible change in national boundary lines, a small French-Canadian town is to be ceded over to the United States, and (even more implausibly) Thorny and his fellow troopers are called in to serve as the town’s new police force. There, they harass motorists, squabble with the local Mounties, crack jokes about the Great White North, and occasionally take some time to investigate a smuggling operation.

The film fires off jokes and sight gags at a rapid clip. One moment the squad is handcuffing Rabbit to a bench to shave his balls, and the next a grizzly bear is wandering through the station. Given the sheer amount of comic material here, some of the jokes are bound to fall flat, but the hit-to-miss ratio is depressingly low. When Thorny and Mac banter back and forth with fake French accents, and to the bemusement of some American tourists, the Broken Lizard crew shows off its penchant for verbal playfulness, but the scene is drowned out by a flood of groan-inducing puns. The film hammers its jokes about Canada into the ground: Did you know they have beavers up there, and listen to Rush sometimes? Only Rob Lowe’s turn as the town’s ex-hockey player mayor—a walking Quebecois stereotype who says things like “Great Tim Horton’s ghost!”—strikes the right tone of winking parody.

Even at its least inspired, there’s still a cheery, loose-limbed vibe to Super Troopers 2 that recalls the shaggy charm of pseudo-classic ensemble comedies like Police Academy and Major League. But Broken Lizard’s general likability can’t overcome the comedy troupe’s reliance on retrograde clichés about women, or how they trade on gay panic for laughs. A running gag about Thorny becoming more feminine after taking the Flova Scotia hormone pill predictably leans on the most obvious of gender stereotypes. Meanwhile, the Broken Lizard boys are practically obsessed with male genitalia, seeming to find the idea of a man being anywhere near another guy’s junk inherently amusing. Less offensive than simply unfunny, these outmoded gags highlight how stale and unimaginative Super Troopers 2 really is.