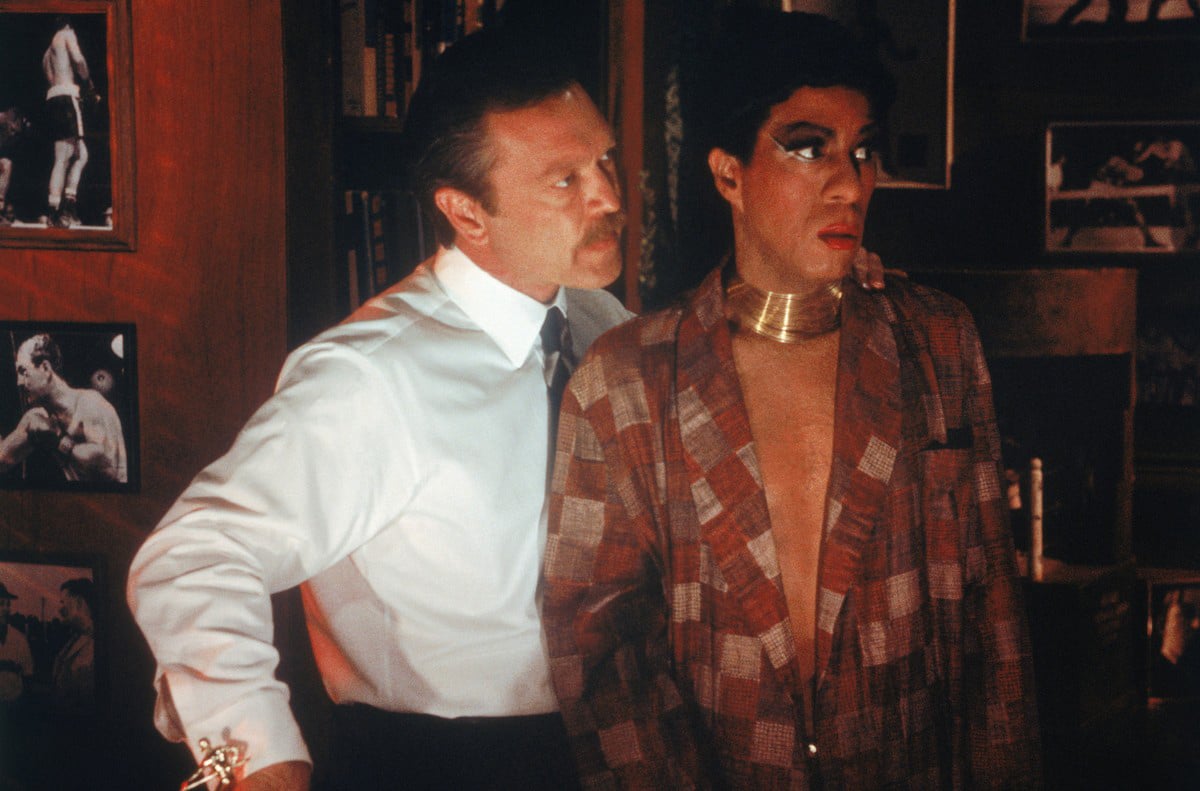 With its fractured narrative, complete with gimmicky spectral figure guiding us through the proceedings, Jo Jo Dancer, Your Life Is Calling is Richard Pryor’s All That Jazz. Playing like a greatest hits collection of Pryor’s stand-up routines, it begins with its titular character freebasing his way into a hospital burn unit, features him pulling a starter pistol on the Mafia, and shows him destroying his wife’s car when she threatens to leave him. Jo Jo Dancer’s profession mirrors Pryor’s own, as does his backstory: The film is shot in Peoria, Illinois, Pryor’s hometown and the location of the brothel where both he and Jo Jo Dancer grew up. Columbia Pictures wouldn’t grant Bob Fosse’s wish to play Jazz’s Joe Gideon, but they let Pryor play himself, or “himself” as it were, creating a meta experience before meta was popular.

Jo Jo Dancer, Your Life Is Calling is far from a perfect film, with passages as awkward as its title. But it is far more ambitious than one would expect from Pryor, who made this his narrative feature film debut. After directing Richard Pryor: Here and Now, Pryor and his longtime comedy writer Mr. Paul Mooney teamed up with Rocco Urbisci to write a biographical film about a destructive stand-up comedian. Since Hollywood, with rare exception, gave Pryor the chance to play dramatic scenes of great pathos and emotion, his writers script him several well-executed moments where Pryor proves a much more subtly effective actor than one might envision. As director, Pryor makes typical newbie mistakes but is excellent when portraying something he knows well. Assisted by his DP John A. Alonzo, Pryor shoots a coke-fueled party with frenetic energy, visually propelling the narrative forward with minimal dialogue. Dancer’s first scene, with Pryor crawling around looking for freebase to smoke, reeks with desperation.

Pryor plays not only the lead but the aforementioned spectral figure, whom the credits refer to as “Alter Ego.” The Alter Ego serves the same purpose as Jessica Lange’s Angel of Death in Jazz, that is, to walk the victim back through events in his life that led him to his near-death state, but Alter Ego is more concerned with trying to convince Jo Jo Dancer that his fucked up life is salvageable. Alter Ego is first seen pulling himself from Jo Jo’s smoldering body post-freebase accident, walking out of the hospital and into traffic stark naked. At first it seems that Alter Ego is the film’s comedy relief, but his true purpose is revealed when Jo Jo Dancer solves its opening scene’s mystery of how its protagonist wound up in that hospital.

Like his stand-up, Pryor deftly mixes humor and tragedy, subtly tweaking familiar tales from his routines. The results are far more harrowing when played out by Pryor and his actors; subtracted from Pryor’s verbal delivery, the comedic focus sort of switches places with the trauma of the actual events. Hearing Pryor tell you the story of him in the hospital burnt to a crisp, comparing himself to fried chicken, is funny and terrifying. Seeing Pryor burnt to a crisp, with doctors working on him in a well-edited and shot sequence, is just terrifying.

Director Pryor realizes this, and while he is not making a comedy, he tries to depict visually the simultaneously hilarious and horrified response we get from seeing him live in concert. For example, his mafia skit from Live on the Sunset Strip provides material for an early scene where, in an attempt to get paid, Pryor pulls a fake gun on some real mobsters. On the album, the mafia men find this hilarious; in the film, they are more ominous and far from amused, going so far as to consider bashing Jo Jo Dancer’s head in with a trophy. Dancer is saved by a cop, who appears at the last minute to stave off the violence. This entire scene plays out with Pryor dressed completely in drag as a stripper, complete with pasties and a Weave™ some women would kill to have on their head.

In Live in Concert, Pryor talks about shooting his wife’s car when she threatens to divorce him. Pryor shoots the car, then describes his calm reaction when the cops show up. “They don’t shoot cars,” he tells us. “They shoot nig-gars!” In the movie’s scenario, Jo Jo Dancer drives his wife’s car off a cliff, complete with the Alter Ego character still sitting in the back seat. As the wife, played by an absurdly profane Debbie Allen, jumps up and down on the side of the road like Daffy Duck, the Alter Ego character climbs up the cliff, saying “the car’s going to need a little work.”

Fans of Pryor can play spot the reference throughout Jo Jo Dancer. The vignettes, which represent signposts in the life Alter Ego replays for Jo Jo (which hew very closely to Pryor’s own), can seem disconnected but provide the feeling of the character’s life flashing before his eyes. Pryor convincingly looks and acts the way he would have in the same timeframe of his own life. These scenes have a protracted quality that feels oddly like the studio pruned them. If anything, I wanted more time within these flashbacks. Pryor’s scenes with his father, his mother and his first wife present some of the best acting Pryor has done since Blue Collar. His scenes in the nightclub where he has his first gig are also well directed and acted by him, Art Evans, Paula Kelly and Billy Eckstine.

Like Joe Gideon, Jo Jo Dancer sees women as something to be either revered or not trusted. Pryor ties a scene with his frequently absent mother to his scenes with his first benefactor, the stripper Satin Doll (played by the scorchingly sexy Kelly). Satin Doll gets him his first big stand up job, looking out for him the way the young Jo Jo hoped his mother would. Alter Ego asks Jo Jo if he ever forgave his mother, and while he hasn’t, some of his actions are rooted in his love for her. Even though Satin Doll has lusty designs on Jo Jo, Pryor plays his interactions innocently, seeing her in an almost maternal fashion. “Thank you, Miss Doll!” he says over and over to her, and his desire to protect her is the reason why he barges into the boss’ office dressed like her (for reasons you’ll have to discover).

Even though Pryor swore that Jo Jo Dancer is not autobiographical, it’s difficult if not impossible to separate the two, especially in the film’s most disturbing sequence. Alter Ego, who not only talks to Jo Jo as he walks through his memories but also offers Jo Jo the opportunity to talk to the people who populate them, tries to talk Jo Jo off of drugs and out of his current situation. This scene takes place in the same space as the film’s opening, but we now see that the fire was no accident. As Alter Ego looks on, Jo Jo Dancer douses himself in alcohol and sets himself ablaze. The visual representation of this scene is profoundly upsetting. It’s as if Pryor, as Alter Ego, is attempting to stop himself, as Jo Jo Dancer, from self-destruction. Yet he is helpless. Pryor’s daughter’s revelation that his freebasing accident was actually a suicide attempt only adds to the psychological horror of the sequence.

Jo Jo Dancer ends with the character’s comeback stand-up concert, a scene that would be dramatically lacking if we didn’t remember that Pryor’s actual comeback was Live on the Sunset Strip. I’m a little disappointed Pryor never directed another feature after this, but I can be comforted by the fact that this film exists, flaws and all, as does all of Pryor’s comedy. His true genius was not just that he held a mirror up to his tragedies; he also said to us, “go ahead! Laugh. It may help you forget that you’re fucked too.” Making Jo Jo Dancer must have felt that way for Richard Pryor.