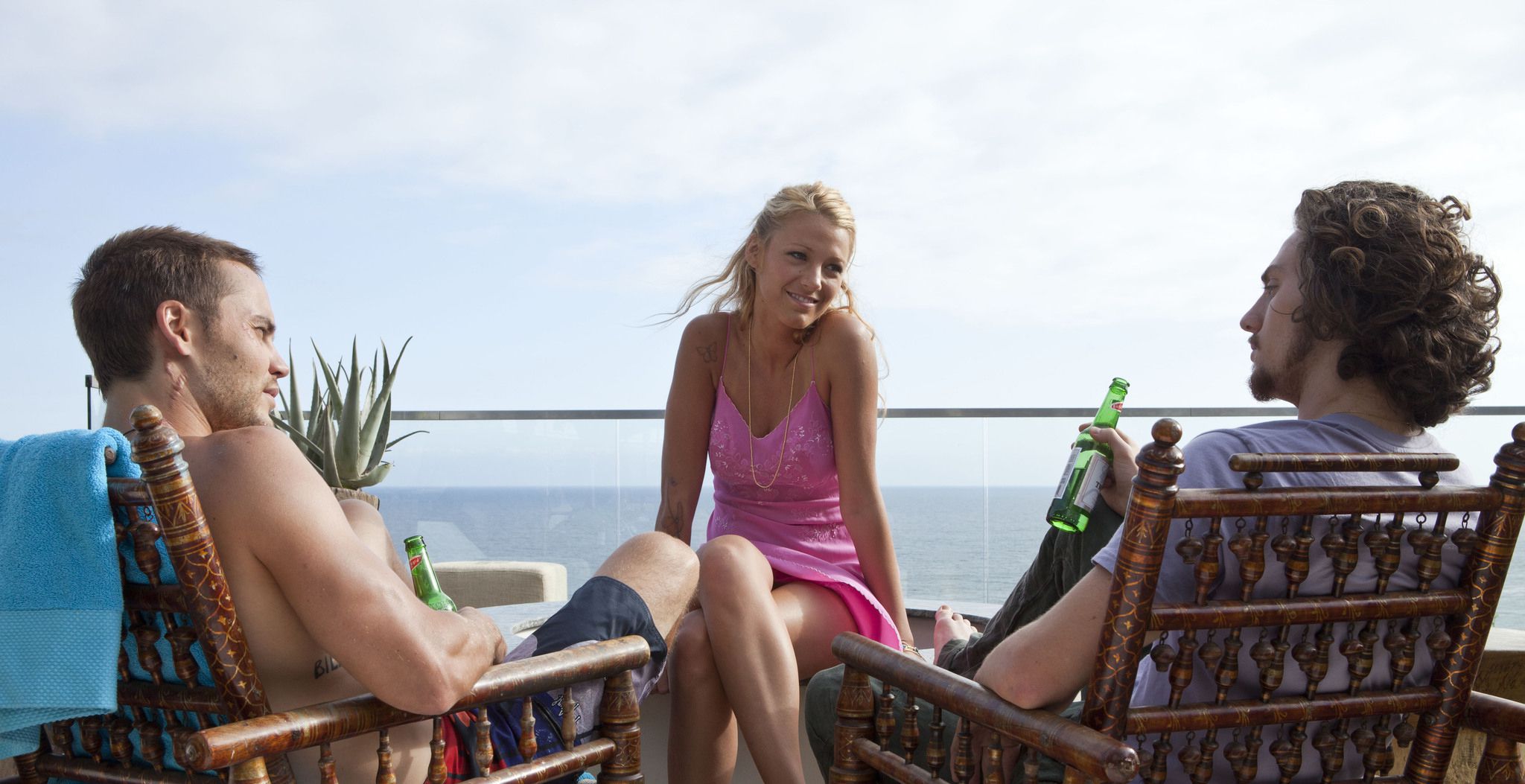 Mexico’s recent drug war has claimed over 50,000 lives, strained already tense border relations, and exposed huge cracks in the nation’s insidiously corrupt government, which remains at the mercy of ravening cartels. In Oliver Stone’s Savages, all this gets relegated to scary stake-setting, a sun-drenched Grand Guignol of car bombs, Santa Muerte masks, and gruesome beheadings, the alien danger threatening a trio of attractive young beach bums who’ve gotten in way over their heads. This myopic focus would hardly matter if any element of this trio was remotely compelling. Instead we get gratingly self-aware narration from O (Blake Lively), the frivolous nymph at the center of a drearily harmonious love triangle. She’s the most visible piece of furniture installed in the plush Laguna Beach pad of weed barons Ben (Aaron Johnson) and Chon (Taylor Kitsch), progressive-minded entrepreneurs who’ve made a bundle on locally cultivated herb.

Befitting Stone’s usual narrative geometry, there’s a huge philosophical gulf between the two friends, with the impressionable, polyamorous O plotted somewhere in between. Ben is gentle and soulful, a botanist who spends his free time installing water wells in Burma and donating laptops to African children. Chon is hard and humorless, with a soul corroded by several Navy SEAL tours in Iraq. Yet there’s never any juncture where O has to choose one personality matrix over the other, and her initial primacy in the story ends when she’s turned into bait, imprisoned in a dingy cell after Ben and Chon make the mistake of crossing the fictional Baja cartel.

The three adversaries on the cartel side prove far more interesting, though each is acutely flawed. The skeezy enforcer played by Benicio del Toro is amusingly gross, but the character unfortunately sees this great actor in preening theatrical mode, caked in grotesque makeup and mangy facial hair. John Travolta’s corrupt DEA agent gets some good moments, ranting and raving whenever backed into a corner, but the script fudges the finer details, with boring clichés for his defining visual motif (always sipping a soda) and requisite sympathy kernel (wife dying of cancer). The entire operation is run by Elena Sanchez (Salma Hayek), but the film squanders any goodwill earned from putting a woman in charge by making her unimaginatively needy and hysterical, easily swayed by her wobbly emotions.

The drug war’s immediacy and brutality could easily translate into great sideline pulp fodder, and the devious three-stage plan Ben and Chon hatch makes for a relatively solid second act. But while his classic hyperbolic visual style is back in force, Stone can’t bother to muster any of his usual righteous anger, instead mischanneling his discontent into a kind of zen acceptance of these perpetually tiresome main characters. So while the core story is as starkly archetypal as in any of his passionate fugues, the stakes feel lower, and the political element, a fuzzy allegory about the inevitable messiness of war, gets obscured as a result. The film manages one serviceable action scene—a hijacking that goes predictably wrong—and one nice bit of highway-set suspense, as Ben and Chon dodge cops en route to a deadline, in a van loaded with 300 pounds of grass. But even these scenes are hampered by the inconsistent tone: Savages never feels rooted in reality, but it never departs far enough from it to accommodate its cartoonish raw materials.

For all their faults, Stone’s hysterical high-period films were always anchored by strong personalities (Mickey Knox, Richard Boyle, Richard Nixon, etc.), violently broken individuals who invite our hatred while still craving our acceptance. But Ben, Chon, and O are vacuous ciphers who don’t want anything, aside from the laidback peace of an Indonesian idyll, where they can swim, smoke good weed, and pet exotic natives. Frida Kahlo once quipped that “Americans are boring, and have faces like unbaked rolls.” The faces here may be more sculpted, but these characters don’t do much else to contest this notion.