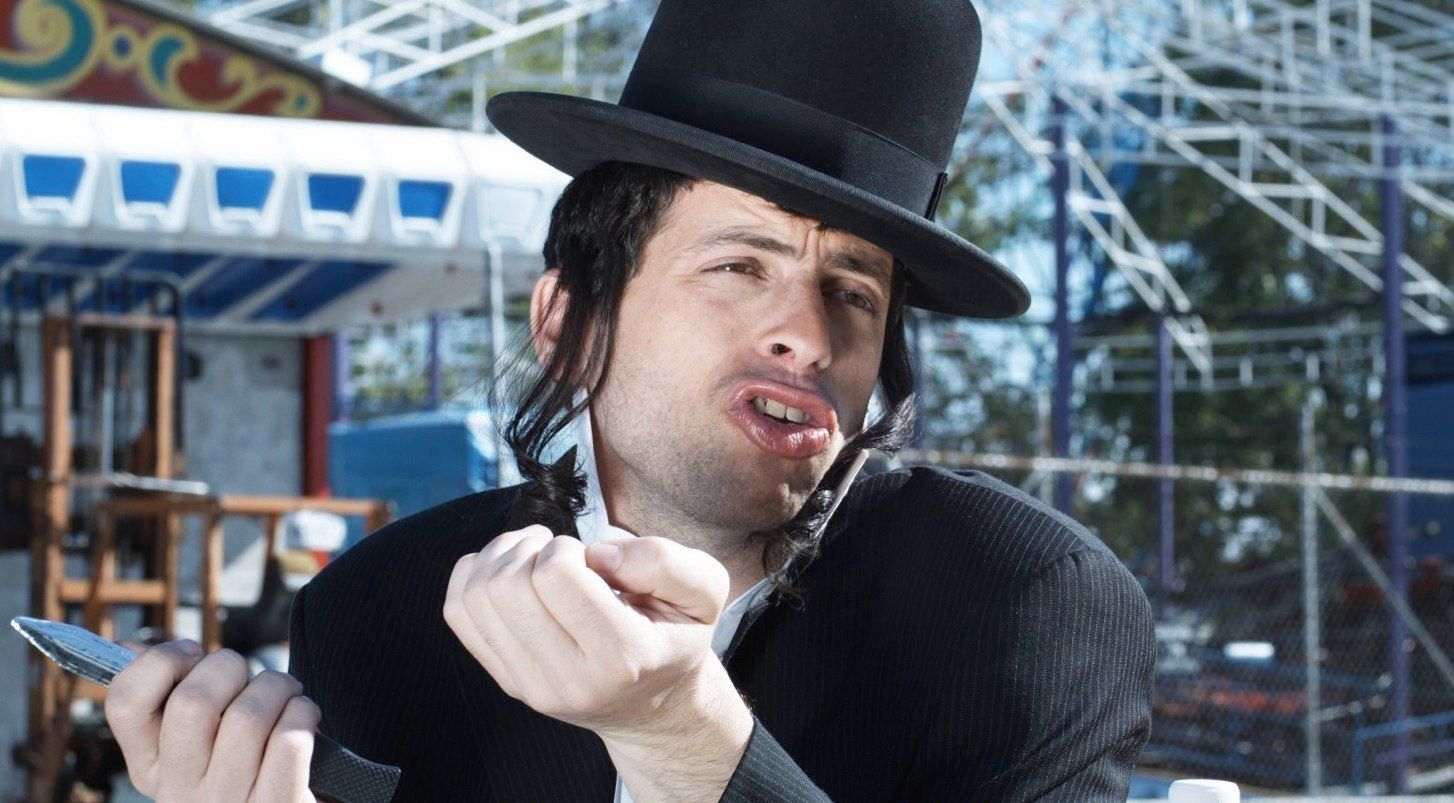 What’s most disappointing about Romeo and Juliet in Yiddish is how it fails to deliver on the hybridizing NYC gimmickry of its title: Rather than an appropriation of Shakespeare’s warhorse that melds academic headiness with hokey ethnic charm, the film meta-cheats by recounting a translation of the Elizabethan text into the titular language by a motley committee of Jews-with-problems. Writer-director Eve Annenberg plays a middle-aged RN and languages grad student who takes on the project primarily for the cash; she recruits a handful of excommunicated Chasidim to check her work and offer resonance to the tinkered-with warring factions trope. (The Montagues and Capulets here become the Satmar and Lubavitch denominations of Orthodox Judaism.) Along the way, and via often abrupt segues, scenes from the play are reenacted in Yiddish, and in redolently urban/cultural settings, by the team of linguists; Juliet’s balcony becomes a fire escape, for example, and there’s a tamely ethereal sex scene involving obligatory sheet fetishism.

Nearly all of the characters seem curiously representative of some seldom-seen subcultural trend, if they’re ultimately somewhat interchangeable. The film’s Romeo (Lazer Weiss), Benvolio (Mendy Zafir), and Mercutio (Bubbles Yoeli Weiss) are, as their non-Shakespearean selves, indolent Chasidic bad boys discovering that iconoclastic drug use and petty theft are more irritating than unholy in the secular world; hotly lit scenes of them navigating their pot-filled, street-straggling, post-apostasy lives while dreaming of the day that they’ll lose their harsh accents tap into an unsettlingly complex, young-adult angst. Annenberg’s fictitious avatar is more sociologically blunt; when we learn halfway through the film that she wants to use the translation money to track down an estranged daughter sired by an orthodox Jew that broke her late-teenage heart, we feel the character’s stack of surface-level identities toppling. (The fact that she’s an RN doesn’t even pertain to the story significantly until a clunky intrusion of Shakespeare’s confused poisonings on the “real-life” action in the dumbly lysergic third act.)

Without a strong protagonist or a viable impetus for the translation’s diagenic significance, we keep waiting for the juxtaposition of the Bard’s drama with the lives of ex-Chasidic twentysomethings to yield some literary, or human, commentary. But the play-within-the-film is ploddingly arrhythmic—an issue with most Germanic Shakespearean translations—and scenes seem to be arbitrarily interpolated within the primary plot. There are a few good gags (with a smash cut, the van the excommunicated Jews live out of is transformed into a Montague chamber), but we don’t feel that these slaphappy transitions are at all relevant to the text. And what’s left unexamined until the film’s final moments is what a fittingly absurd alloy the script’s bifurcated cultures make, especially considering the foreignness of occidental romance to the more practical—and occasionally misogynistic—Chasidic philosophy. But Romeo and Juliet in Yiddish is neither Elizabethan nor Jewish enough to succeed as an unlikely mashup of institutionalized lifestyle boundaries.

Summer of ‘86: The Great Mouse Detective