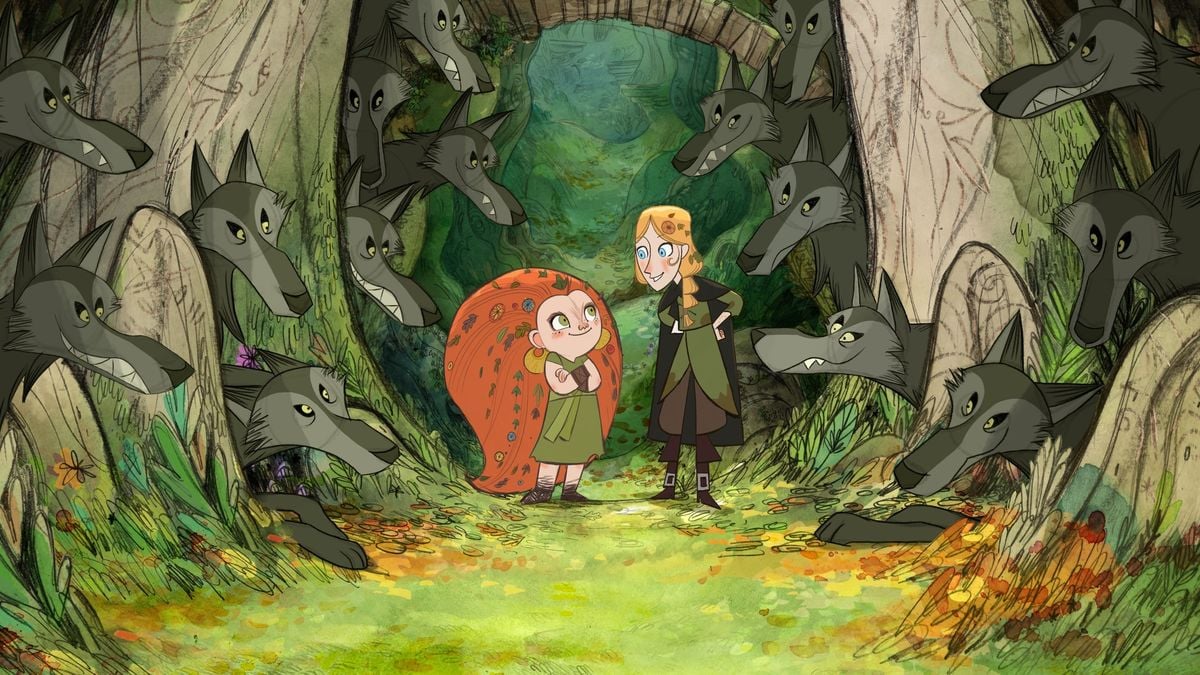 Though the world of Wolfwalkers abounds with the Celtic magic of shapeshifters and healing spells, it’s the film’s art itself that sometimes seems the most enchanted. Showcasing the same hand-drawn animation that has distinguished Cartoon Saloon’s earlier Irish mythology-inspired works (The Secret of Kells and Song of the Sea), Wolfwalkers pans across still, verdant landscapes that occasionally burst with life, with creatures crawling out of trees in the otherwise frozen background. Inspired by early modern woodblock prints, filmmakers Tomm Moore and Ross Stewart play with depth and texture, their vivid characters materializing in the foreground like figures in a watercolor puppet theater.

As Wolfwalkers begins, the 17th-century Irish city of Kilkenny has a wolf problem. Outside the city’s walls, the forest is inundated with them, and the Lord Protector (Simon McBurney) needs to put his farmers safely to work. Enter Bill Goodfellowe (Sean Bean), an English huntsman who’s tasked with eliminating the wolves. But as Bill scours the forest for his prey, his restless daughter, Robyn (Honor Kneafsey), sneaks off to explore the area and is promptly attacked and bitten by a wolf who’s actually a girl, Mebh (Eva Whittaker), and whose spirit takes on lupine form while her human body sleeps. Pretty quickly, Robyn is feeling the effects of that wolf bite—she’s now also a wolfwalker—and she’s eager to help Mebh find her missing mother and save their pack from Bill and the ever-angrier mob of wolf-hating citizens.

In human form, Robyn makes for a boisterously snarky hero, but she’s even more fun to follow as a wolf. The film’s most distinctive sequences depict the world from a wolf’s-eye view—or, rather, a wolf’s nose, as shimmering, colorful streaks of scent trails show how the transformed Robyn navigates the forest on all fours. While Song of the Sea dug deeply into a grief-stricken family’s healing against a background of modern Celtic myth, Wolfwalkers focuses on a different kind of reunification: the Goodfellowes becoming one with the natural world, both the fragile environment and the animals that fight for survival within it. Ecological messaging drives Will Collins’s screenplay to an inevitable, climate-centric climax, even if the film’s mystic swirls overwhelm any practical, contemporary takeaways about caring for the Earth.

Wolfwalkers growls scornfully, if imprecisely, at the herd mentality that overtakes a violent citizenry and the way that organized religion feeds this fearful frenzy. Local bullies torment Robyn, the English outsider, as they act out their fantasies of wolf slaughter, but there’s not quite enough backstory here for us to be sure whether these kids inherited their wolf anxiety unfairly or whether it’s justified by the wolves’ occasional viciousness. Moreover, the seemingly genuine piety of the anti-wolf and anti-pagan Lord Protector muddies an otherwise villainous portrait with an arc that projects neither hypocrisy nor redemption clearly.

The loveliness of Moore and Stewarts film, however, lies precisely in its reluctance to pack a punch. Just as some frames turn impressionistic, with borders of leaf patterns replacing more faithful forest scenery, the storyline’s edges are frayed just enough to give it the gentle distance of a tale recalled though the gauze of myth and memory.

Review: Madre Moodily Reflects on How the Memory of Loss Distorts Reality

Review: His House Is a Creepy Allegory About Learning to Live with Trauma