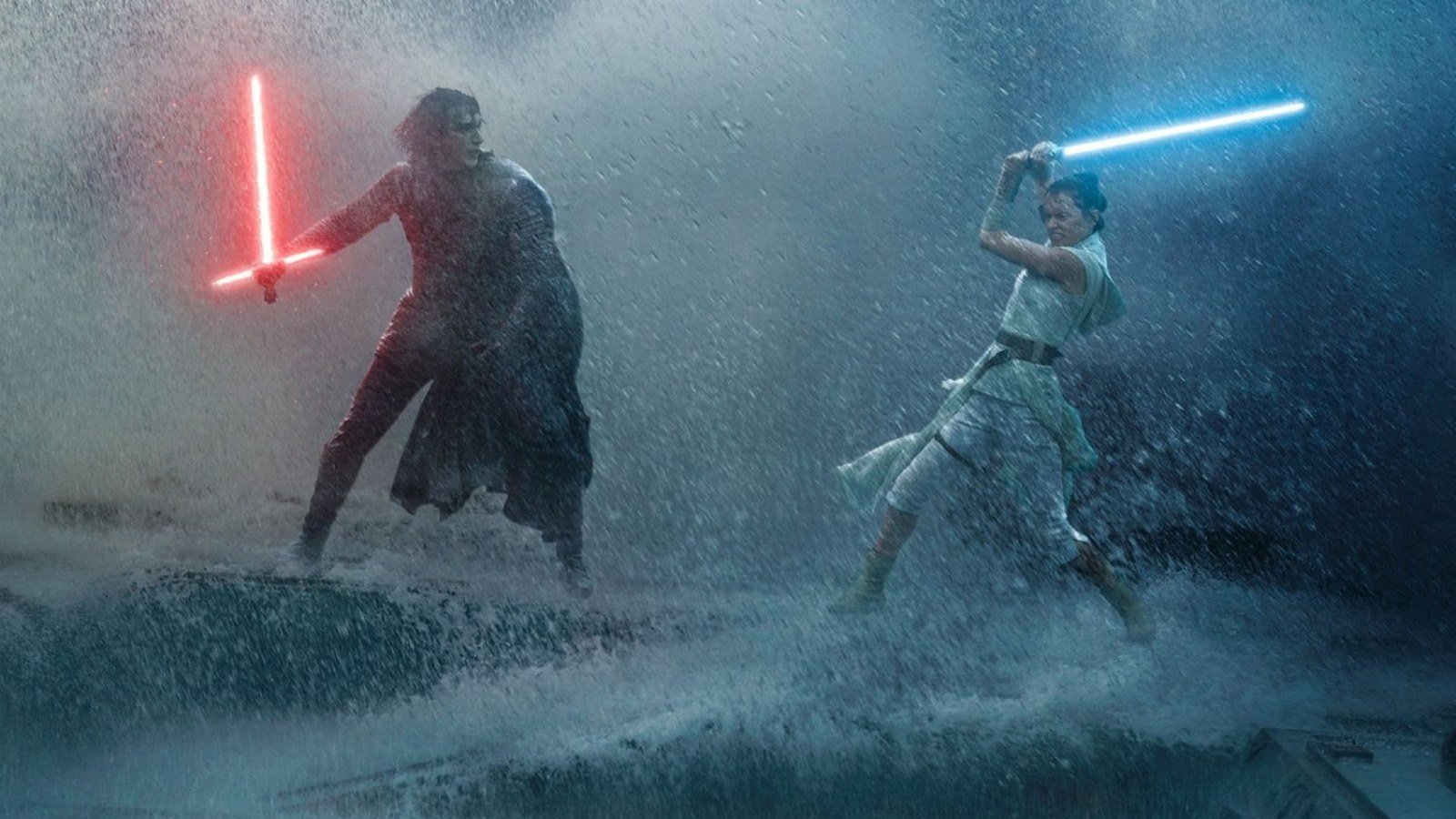 “The dead speak!” exclaims the opening crawl of Star Wars: The Rise of Skywalker—the latest and final episode of the nine-part “Skywalker saga”—and the phrase possesses eerie significance. As the preeminent cinematic franchise of the last four decades, Stars Wars has become increasingly obsessed with resurrection in both purpose and content, keeping alive its legacy and box office dominance by endlessly referencing and recycling its past. But you can’t leech off the dead without deadening yourself. From its first to last frame, The Rise of Skywalker rages against the dying of the cultural spotlight: In a strained, desperate effort to restore relevance after franchise over-saturation and disappointment, J.J. Abrams’s film spectacle exhausts itself so thoroughly that the entire enterprise becomes moribund.

In order to win back fans alienated by Rian Johnson’s The Last Jedi, Abrams immediately turns to familiar faces and situations. But it’s a strategy that causes the film, like The Force Awakens before it, to feel like a retreat, given how it recycles the same narrative beats from George Lucas’s original trilogy. In the opening scene, First Order Supreme Leader Kylo Ren (Adam Driver) discovers the lair of Emperor Palpatine (Ian McDiarmid), who cheated his apparent demise in The Return of the Jedi and, it turns out, secretly orchestrated major events in the last two films. Shrouded in darkness, Palpatine more than ever resembles a living corpse, and his plan to unite enemies Ren and Rey (Daisy Ridley) and reestablish the evil Sith guild is just the first of the film’s many instances of gloomy Lazarus-ism. The Rise of Skywalker features no less than six characters who circumvent their mortal end. It’s as if the film is as afraid of finality as the characters are unwilling to succumb to death.

That’s not to mention the return of the real-life deceased, with Carrie Fisher appearing on screen (in unused footage intended for The Force Awakens) as Leia Organa, and, like the revived Palpatine, casting a funereal pall over several scenes. Leia commands Poe (Oscar Isaac), Finn (John Boyega), and Rey to find an ancient Sith relic that will allow the Resistance to somehow defeat the First Order. And “somehow” will have to suffice in lieu of a detailed plot summary because the film is so dedicated to a revolving door policy of MacGuffins, side plots, locations, and character motivations that the result is inarticulate narrative chaos.

It’s enough to say that story arcs that began with The Force Awakens—Rey’s temptation by the Dark Side, Leia’s longing to win back Ren from the clutches of the First Order—are largely resolved, though to what degree of satisfaction for the Star Wars faithful remains to be seen. If the cast is any indication, by the end of this nine-part saga fans might be more worn out than exulted. Flop-sweating through a numbingly paced succession of battles that increasingly take place in dimly lit and desolate settings, even the younger actors look fatigued and are in no part helped by rote and apathetic cameos from Mark Hamill and other surprise Star Wars alumni. 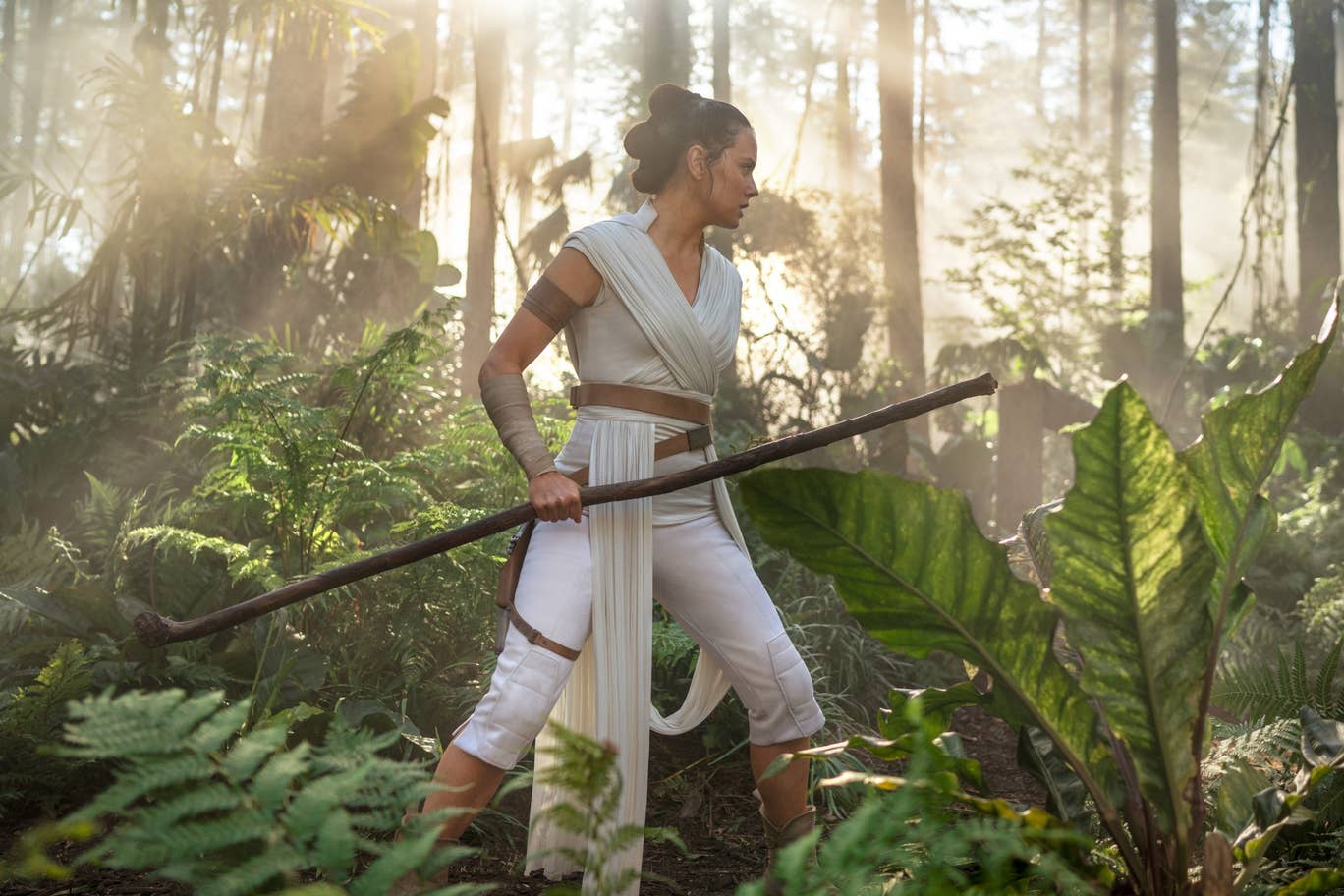 Hyper-aware of the shadow cast by the franchise’s history, The Rise of Skywalker struggles to both honor and redeem the past before everything comes to a close. This is especially evident in its negation and autocritique of several controversial elements from The Last Jedi. As introduced in that film, plucky Resistance fighter Rose (Kelly Marie Tran) was met by fans with a lukewarm response, and so in The Rise of Skywalker she’s been effectively sidelined. Elsewhere, Luke Skywalker’s (Hamill) flippant response when handed back his lightsaber in The Last Jedi—a moment that had legions of fans up in arms—is slyly chastised.

Most notably, though, Rey’s origins have been repealed: Whereas The Last Jedi dismissed her parents as “nobodies,” The Rise of Skywalker course-corrects from this revelation to steer the saga back along the path of mythic heroism. These revisions will likely be greeted by many viewers with welcome relief, but they also signal creative defeat and exacerbate the undertone of pathetic resignation that pervades the film.

From Quentin Tarantino’s Once Upon a Time…in Hollywood to Martin Scorsese’s The Irishman, American cinema in 2019 has regarded the unforgiving passage of time—and with it the decline of conventional cinema as our culture’s most influential and vital art form—with sadness, regret, and surrender. The biggest surprise of The Rise of Skywalker—formulaic to a tee and enslaved to its own legacy—comes not from its characters or storylines, but from a mood of decay that aligns with the current state of the medium. In most of its conversations and action set pieces, the film is dark, fearful, and ready to give up the ghost; the denouement doesn’t repeat The Return of the Jedi’s celebratory triumph, but instead just lets out a long overdue exhalation.

For 40-plus years, Stars Wars has served as the movies’ Death Star, resurrecting into ever more colossal, if derivative, iterations of its original self in order to remain at the forefront of too-big-to-fail cinema. Now that other franchises have become more lucrative and more culturally impactful, and now that cinema itself seems to no longer need the spectacular format nor command the market through which Star Wars made its fortune, The Rise of Skywalker signals the end of the Death Star—not the films themselves (more sideshows to the nine-film saga are on their way), but their artistic hegemony. That this saga ended so solemnly, and with so much crippling self-consciousness and anxiety over its own lasting importance, would have once been unimaginable.

Review: Invisible Life, Like its Women, Is Impossibly Bound by Convention