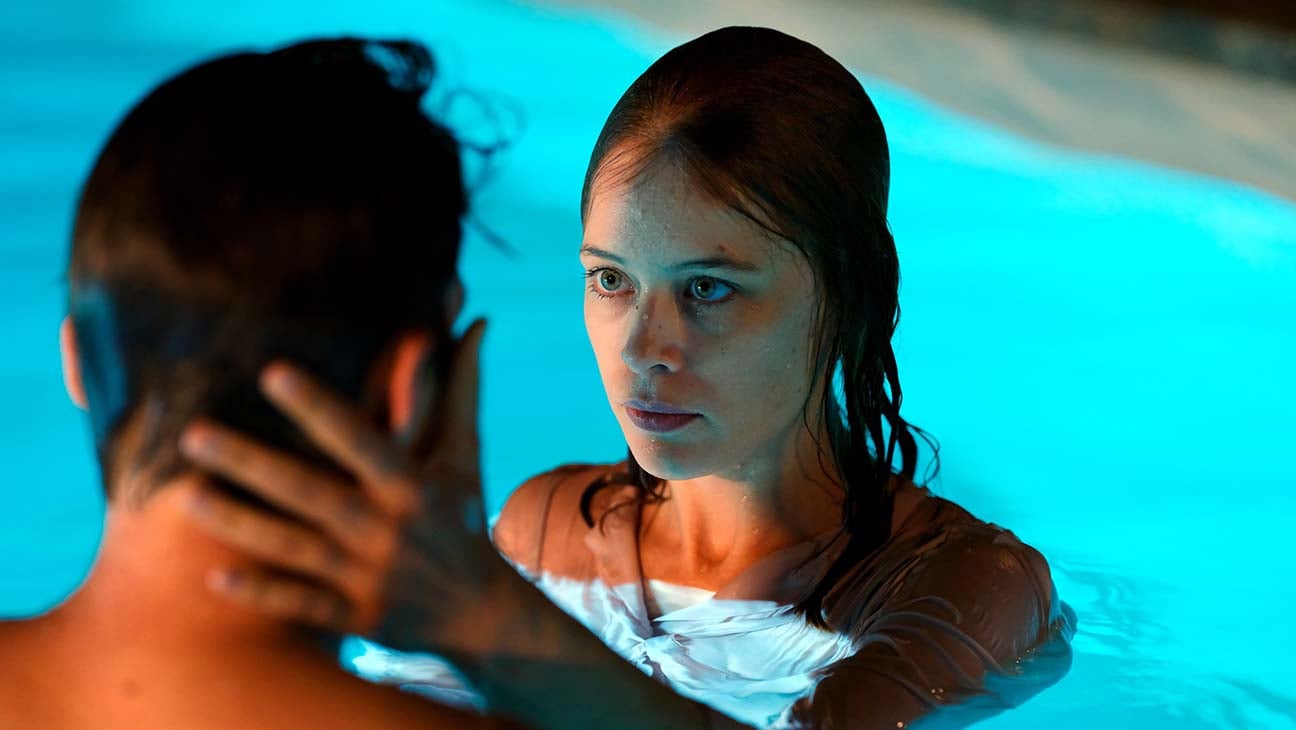 Throughout his increasingly formidable oeuvre, Christian Petzold has nested stories of doomed love in surveys of his home nation’s reaction to economic or historical upheavals. Whether they’re furnishing vendor carts in the German countryside (Jerichow) or attempting to reestablish an identity in the wake of World War II (Phoenix), Petzold’s characters seem to cling to romance as a stabilizing force in turbulent times. Though at once lighter and stranger than any of his earlier work, Undine makes the melodramatic trappings of the director’s previous films its explicit subject, questioning the fixed nature of human behavior in a world whose borders are constantly shifting.

It’s ironic and puzzling, then, that Undine’s eponymous character is both human and a water sprite. The film’s opening shot is fixed on the electric orange curls of Undine’s (Paula Beer) hair as she sits, downcast, at an outdoor café. She’s being dumped by her wealthy boyfriend, Johannes (Jacob Matschenz), an affront that she attempts to combat with semantics. When this fails, she tells him, “If you leave me, I’ll have to kill you. You know that.” This is a succinct enough summary of the myth Undine takes as its source text, in which a sprite is given human life after she falls in love with a man who she insists must remain faithful to her.

Petzold shoots that breakup in a tight shot-reverse shot sequence, emphasizing the bland, molded sympathy of Johannes and Undine’s alert, probing micro-expressions. The scene’s realism is interrupted twice: by a church bell that elicits both a tear from Undine and a slight, spectral rising of music on the soundtrack; and by the flip phone that Undine opens to reexamine a recent voicemail. As this typically compact but deceptively rich film moves along, such flashes of dislocation proliferate, undermining Undine’s seemingly contemporary setting and leaving us to wonder whether love and logic are compatible.

The film gambols between tones from the outset, rushing Undine, a historian who traces the expansion of Berlin over centuries, to a presentation on local architecture and then back to the café where, hoping that Johannes has changed his mind and opted to stay with her, she meets Christoph (Franz Rogowski), a goofy industrial diver who fixes bridges and dams. Their mutual relationship to both the water and industrial infrastructure is sanctified in a meet-cute involving a broken aquarium and a whispered voice from another realm. Christoph and Undine’s love—a romance that plays out like a piece of mystical/screwball fan fiction for Transit obsessives agonized by that film’s fateful vicissitudes—instantly feels complete.

While Undine luxuriates in the gushiness of Christoph and Undine’s mutual attraction, Petzold also takes pains to frame his romance around Berlin’s evolution from a modest trading hub to a locus of international division to, finally (or at least for now), a mirror of the urban creep of gentrification and fad economies. (It’s worth noting that the café Undine returns to repeatedly is housed in an old church.) And this commentary takes the form of lectures delivered by Undine at the Senate for Urban Development and Housing, in a room dominated by scale models depicting Berlin’s sprawl over the past few centuries.

Her speech on the Berlin Palace, an imperial hub dating back to 1443 that was destroyed 500 years later and is currently being rebuilt to house a museum, refers to the “phantom pain of a violent amputation” that must be reclaimed in a modern context. “Progress is impossible,” she hypothesizes, but individuals and the broader public nonetheless long to make a performance of healing. This poignant speech is one of the few moments where Undine seems to obliquely reference her identity as a once- or semi-aquatic creature. Petzold’s concise narrative has plenty on its mind, but it’s challenging to reconcile the fantastic nature of his premise with the relative lack of importance it attaches to Undine’s actions or philosophy.

Progress, like romance, moves in cycles, and Undine’s speech augurs the return of Johannes to her psyche. Their chance meeting opens up a rupture in Christoph and Undine’s heretofore unalloyed mutual affection, and as Petzold ushers his lovers toward doom, the film almost seems to rewind, revisiting most of its settings and turning sites of passion into mausoleums of aching and regret. “Form follows function,” Undine says in one of her presentations, and with minor alterations in framing and presentation Petzold fundamentally shifts our sense of these locations. Apparently the first in a trilogy of modern stories based on fables, Undine is a striking change of pace that sacrifices none of the director’s intellect or ambition.

Review: Days Is an Unsentimental Meditation on the Need for Reciprocity

Review: The Roads Not Taken Leads Only to a Void of Imagination