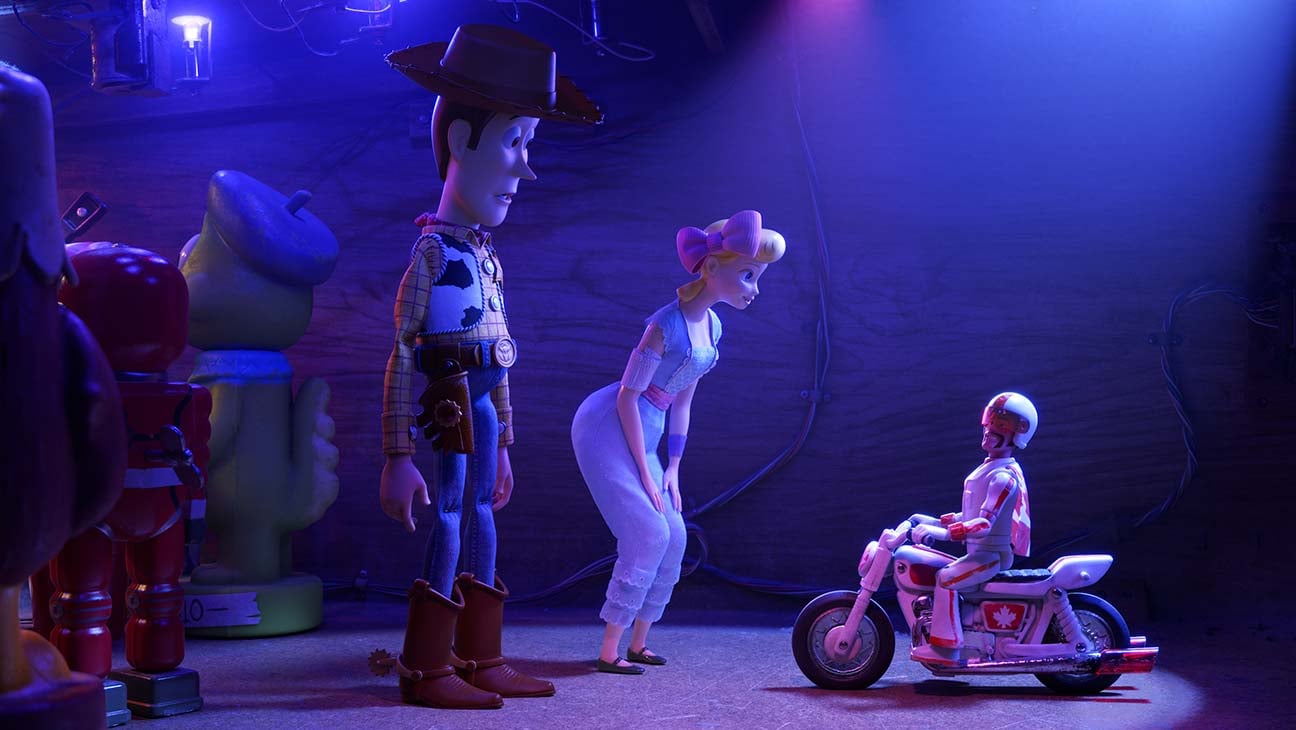 It’s probably uncontroversial to claim that Toy Story’s Woody (Tom Hanks), a flawed leader whose genuine concern for his compatriots intermingles with a narcissistic streak that can get him and his fellow toys into trouble, is one of the great characters in the history of cinema. That this animate, outdated cowboy toy continues to feel just as compelling and just as layered and relatable four entries into this series is a major achievement, and speaks not only to the dedication of his creators, but also to the strength of his original conceptualization. While other Pixar sequels have run their concepts and characters into the ground, or cheapened them for laughs, the Toy Story sequels have remained true to Woody, even deepening his character by finding new existential crises to throw him into.

Toy Story 4, though, finds the series suffering from brand fatigue. While prior entries put new spins on the fear of obsolescence that drove Woody in the original Toy Story, this film is a compendium of elements from its predecessors. We’ve already witnessed Woody desperately try to regain the love of a child, intentionally become a “lost toy” in order to chase down a missing friend, escape from monstrous (but probably just misunderstood) toys, and face the temptation of a new life outside of a child’s toy box. That all of these moments recur in Toy Story 4 is one reason the film doesn’t quite pack the emotional weight of its precursors.

Gifted to a new, preschool-age child, Bonnie, at the end of the last film, Woody opens Toy Story 4 having fallen from his treasured position as the favorite toy. Your typical preschool girl, after all, has little interest in a cowboy toy from “the late ‘50s, I think,” as Woody recounts his own vague origins. Wistful for his days with Andy, his previous owner, Woody tries to insert himself into Bonnie’s (now voiced by Madeleine McGraw) life by sneaking into her backpack on the first day of kindergarten. And it’s there that he witnesses her crafting her new beloved toy: a spork with googly eyes and pipe-cleaner arms she calls Forky (Tony Hale).

Forky is a terrible toy insofar as he has no desire to be a toy at all; a very funny recurring gag early in Josh Cooley’s film sees the toy repeatedly trying to throw himself in the trash, where he feels that he belongs. Woody gloms onto Forky, partially out of genuine concern for his and Bonnie’s well-being, and partially as a way of maintaining a connection to the little girl. And when Forky goes missing during a family vacation, Woody ventures out on his own to retrieve the haphazardly assembled toy and return him to the family RV.

Forky is as familiar as the other toys that populate the Toy Story universe: Many children have made small avatars of themselves out of popsicle sticks and plastic bits and invested far too much emotion in it. As a character, Forky doesn’t hold much all that much water, his development from trash to toy more a gimmick than a fully textured character arc. Wisely, though, Toy Story 4 damsels Forky, so to speak, as Woody must engineer a way to rescue him from the clutches of a malicious talking baby doll named Gaby (Christina Hendricks).

Gaby and her army of unsettling, limp-limbed ventriloquist dummies rule over an antique shop that Woody and Forky pass through on their way back to the RV park. A lonely toy discarded decades earlier because of a defective voicebox, Gaby kidnaps Forky to extort from Woody a part of his drawstring-powered sound mechanism. To break into the cabinet where Gaby is holding the sentient spork, Woody must assemble a team of allies that includes Bo Peep (Annie Potts), whom he finds living on her own in the RV park as a lost toy, and Buzz Lightyear (Tim Allen). Woody and Bo Peep rekindle their (G-rated) feelings for each other as they recruit the daredevil action figure Duke Caboom (Keanu Reeves) and the plush carnival-prize dolls Bunny and Ducky (Keegan-Michael Key and Jordan Peele) to help retrieve Forky.

Among the familiar elements here is the abandoned and resentful toy as a villain who holds the heroes hostage, which easily invites comparison to Lee Unkrich’s brilliant Toy Story 3. It’s a comparison that doesn’t favor the new film, which isn’t as impactful in terms of story or image. Cooley’s direction is fluid, seamlessly interweaving the fun escapades and the earnest emotions, but it lacks the visual power of the prior film. There’s no equivalent to the moment in Toy Story 3 when, headed into a blazing incinerator, Woody and his friends silently grasp hands, taking comfort in one another as they face their ends head-on.

So, as well-told and emotionally effective as Toy Story 4 is, it’s difficult not to believe the third film would have functioned better as a send-off to these beloved characters. In fact, Toy Story 3 might as well have been a send-off for everybody but Woody, as the new and potentially final entry relegates the traditional supporting cast of the Toy Story films—Rex (Wallace Shawn), Hamm (John Ratzenberger), Jesse (Joan Cusack), Slinky Dog (Blake Clark)—to the background. Even Buzz is reduced to dopey comic relief, pressing the buttons on his chest to activate the pre-recorded messages he now misunderstands as his “inner voice.” Toy Story 4 is very much a Woody story. His gradual acceptance of his new position in life and his reconnection with Bo Peep are moving, and it’s still remarkable how much Pixar can make us identify with a toy. But for the first time, a Toy Story film feels a bit like it’s resting on its plastic laurels.