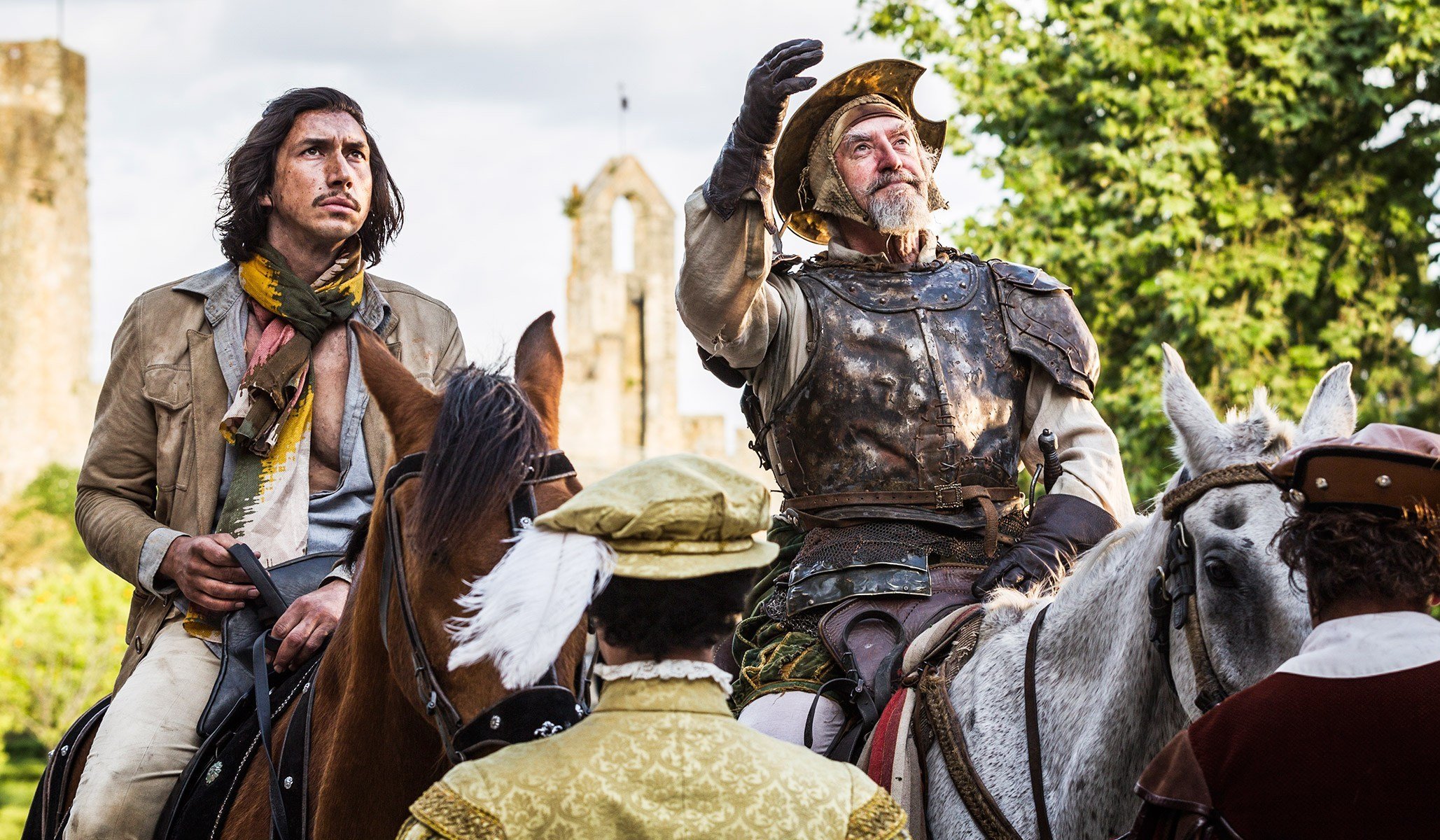 “I am 400 years old. It’s not easy living so long, but I cannot die,” says Don Quixote (Jonathan Pryce) in Terry Gilliam’s The Man Who Killed Don Quixote. He adds, “Unless, perhaps, I can rid myself of my dreams.” In the present day, the knight errant has been reduced to a sideshow performer, living in the outskirts of the Spanish village of Los Sueños. In a dilapidated caravan, he holds up a dog-eared copy of Miguel de Cervantes’s Don Quixote, speaking to his visitors as if adhering to a script. And behind him, a projector shows a film depicting his exploits alongside his squire, Sancho Panza (Jorge Calvo).

Nothing like this happens in Cervantes’s magnum opus. Gilliam isn’t adapting Don Quixote so much as having a conversation with it, an approach which more aptly transmutes the spirit of a book that’s replete with ideas and arguments about authorship, translation, and role-playing, as well as stories that constantly bounce off one another. Pryce’s Quixote is a man enchanted, and the person who will release him from his spell is his actual creator: Toby Grummett (Adam Driver), a cynical director of commercials who happens to be responsible for the film being projected inside that caravan. Turns out that Quixote isn’t actually Quixote, but an old cobbler named Javier who was cast 10 years ago by Toby in the role of Cervantes’s iconic character. After Toby finished his student film, Javier so fully identified with his part that he felt as if he had become Quixote, similar to how Don Quixote’s Alonso Quijano adopted the Quixote moniker after overindulging in chivalric romances.

Toby has returned to Los Sueños because of an expensive Quixote-themed commercial that he’s been commissioned to direct by his boss (Stellan Skarsgård), who hopes to secure a propitious contract with a vodka company backed by a Russian oligarch, Alexei Miiskin (Jordi Mollá). Toby is depleted of inspiration and attends production meetings with an air of apathy. He’s estranged from any youthful ideals of his days as a student filmmaker, becoming a cog in a sleazy production machine while chewing on the perks his job affords him. During one of these meetings, a tattooed gypsy (Óscar Jaenada) hocking pirated DVDs offers the group a copy of Toby’s student film, The Man Who Killed Don Quixote, which the director clutches and holds close like a precious part of himself he’d thought lost. He leaves the commercial set on a nostalgic whim, looking for the town and people featured in his first movie.

The intervening years haven’t been kind to Los Sueños. The actor who played Sancho Panza in Toby’s film died of alcohol-related illness; Angelica (Joana Ribeiro), a beautiful teenager whom Toby assured could be a star and so cast her as an embodiment of idealized femininity, moved to Madrid and became an escort; and, of course, Javier went mad. There’s a question if the amoral Toby is in a sense responsible for what happened to the players of his film, and as such his return to Los Sueños, or “Dreams,” can be understood as an artist’s atonement for what he’s created—and what he’s lifted from his forebears. Toby no longer glides above the action before him as the organ grinder barking orders, forced as he is to become an active participant in a maze of mirrors, enlightened to the effects his art has on others. When Toby encounters Javier inside the caravan, Sancho’s movie image is superimposed on Toby’s face. It’s then that Pryce’s ersatz Quixote recognizes the director as his estranged squire, believing him to have been sent to Los Sueños to rouse the cobbler from his enchantment.

Pryce’s performance invites us to also project our own ideas of Quixote’s legend onto him. The actor steps into Quixote’s heralded shoes as a paradox of provincial innocence and weathered sagacity, making his character appropriately multitudinous. That faded floppy-eared copy of Don Quixote in his hands says plenty. Cervantes’s classic is important for its self-reflectivity, for how Don Quixote reflects how texts, cultures, and relationships author us as much as our perspectives author the world surrounding us. Four hundred years later, he’s been reduced by popular culture to empty iconography. Of course Toby directs commercials, as art and advertising are often indistinguishable in a time when major movie tentpole releases are like 150-minute commercials for upcoming movies in expanding universes. Quixote’s black-and-white image might as well be a celluloid sarcophagus. Gilliam’s film, then, engages with Don Quixote in an attempt to resurrect and revivify its significance.

Toby’s fateful encounter with the mad Javier serves to propel the men out of their respective stupors. Soon they head into the countryside, with Javier assigning Toby the moniker of Sancho Panza. Expectedly, their adventures incorporate familiar episodes from Cervantes’s novel: Quixote’s delusions of seeing windmills as giants and sheep as people, a knight covered in mirrored armor, women cursed with beards, and so on. But these instances often diverge from the novel—alterations that come to suggest an amorphous Quixote dream soup where theatrical artifice and reality meld together, as they often do in the movies, and as much as imperial Spain and the contemporary world do in Gilliam’s film.

In this sense, there’s an offbeat, improvisational rhythm to the film that can feel as if Gilliam’s struggling to find his footing, but then this is a work about an egotistical director lost in the wilderness, his pride affronted by the realization that what he creates has a life of its own. The Man Who Killed Don Quixote begins with titles acknowledging how it’s a work “25 years in the making—and unmaking,” referencing the quite tempestuous production history of Gilliam’s film. Javier and Toby are constantly pursued, the former by the townspeople of Los Sueños, the latter by the Skarsgård character’s advertising company, and in each case, the ultimate purpose is to rein in and profit off a pair of creative personalities.

This comes to a head in a thread involving Angelica, whom Toby discovers is betrothed to the thuggish Miiskin. Javier and Toby are captured and brought to Miiskin’s castle, where the film’s blurring of reality and art reaches a crescendo. Gilliam goes a step beyond Cervantes, with Javier exchanging his Quixote armor for an outfit indistinguishable from that of the Skarsgård’s bossman. When Toby tries to urge Javier to action and help him save Angelica, the old man resigns his chivalrous demeanor, admitting, “Why not? Everyone’s happy.”

It’s a sentiment that calls for some unpacking in this context. In now playing the hero, Toby is sort of embodying hackneyed tropes that Cervantes’s novel was dismantling. But it’s the safe familiarity of those tropes that make them so hard to escape, particularly when they yield so much profit. In Miiskin’s castle of trivial entertainments, men and women are bound to their familiar typecast roles as saviors and damsels in distress, with neatly drawn lines of good and evil, angels and whores. Reflecting Javier’s pleasant resignation and Toby’s newfound valiance, Gilliam himself seems close to embracing the castle’s enchanting conventions, swooping us up in an old-fashioned climax where Toby races to save Angelica from a sacrificial fire.

This would land the film in fairly safe terrain as an adventure yarn, the kind of story Cervantes was parodying in fact, but the conclusion shows how Gilliam ultimately sees through such ready-made dramatic trappings and is true to his source material. Exultation of the heroic savior is another egotistical hurdle to be overcome, as regards to both the characters and their author. As frenzied and indulgent—which is to say, Gilliamesque—as The Man Who Killed Don Quixote can sometimes be, the whole feels very restrained, its resonance revealing the director to be unexpectedly second-guessing his own authorial vanities and ideals.

This underlies Gilliam’s final gesture in The Man Who Killed Don Quixote. Quixote’s adored Dulcinea—the idealization of whom suggests an imprisoning pedestal, much as Gilliam has remained steadfast in making this film for more than two decades—transmogrifies to Sancho Panza, the squire who, over time, becomes his master’s dialectical equal. Gilliam injects new life into a fusty old tale more revered than read, Cervantes’s heroes at last moving beyond representative confinement and finally speaking freely as equals.

Review: Mary Magdalene Is a Flat Retelling of the Greatest Story Every Told