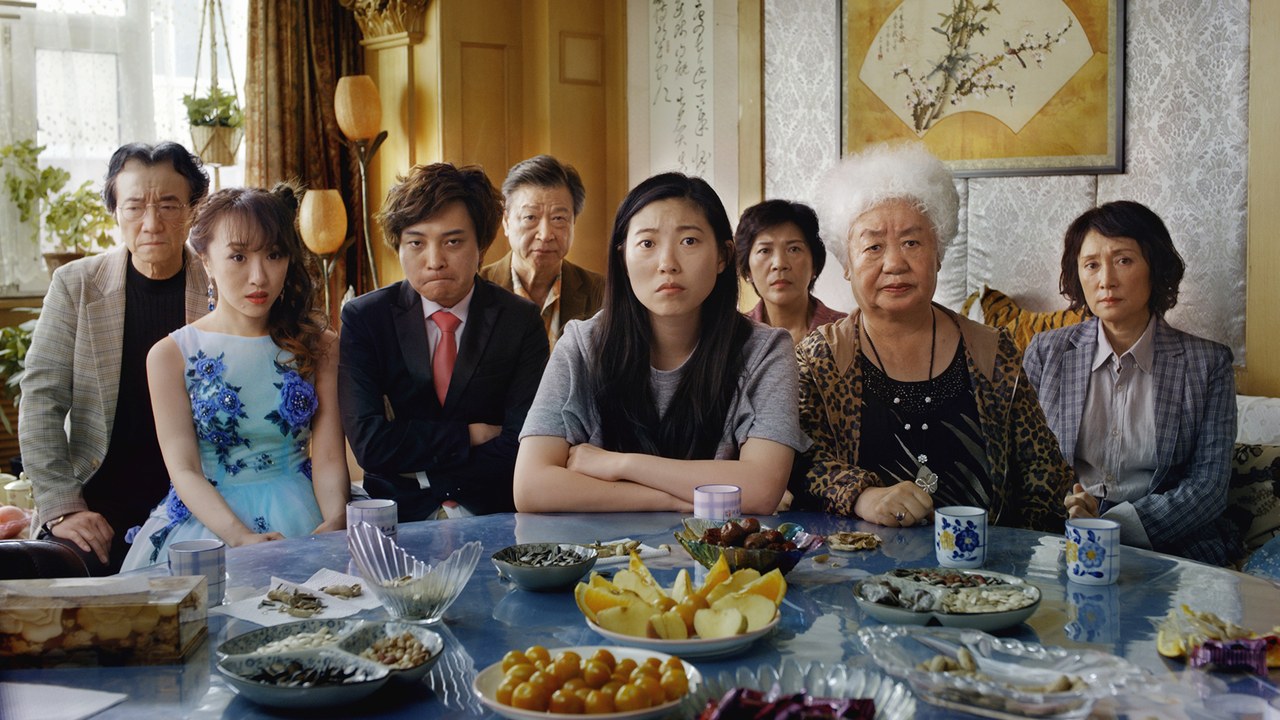 In the opening scene of writer-director Lulu Wang’s The Farewell, a Chinese grandmother (Zhao Shuzhen), affectionately referred to as Nai Nai by her family, and her Chinese-American granddaughter, Billi (Awkwafina), have a warm, affectionate phone conversation in which each woman incessantly lies to the other. A professionally adrift, financially bereft millennial whose writing ambitions have come to naught, Billi lets her grandmother believe her life is busy and full of social engagements; for her part, Nai Nai insists that she’s at her sister’s house, rather than in a drably decorated doctor’s office. Wang frames Nai Nai against the kitschy, oversized picture of a lagoon that hangs on the wall, as if to emphasize the flimsiness of the illusions the pair is painting for one another.

The sequence calls to mind the advantage of audio-only phone calls: for allowing us to more easily maintain the falsehoods that comprise a not insignificant portion of our relationships. Given that minor mistruths prop up our most basic social connections, Wang focuses The Farewell on the moral quandary of whether a big lie—specifically, culturally contingent situations—might actually be an expression of genuine love. The film takes up the question with a tone of melancholic drollery, a sense of irony that doesn’t lose touch with the human feelings at its core. The Farewell is “based on an actual lie,” evidently an episode from Wang’s life, and its careful mixture of the somber and the absurd rings true to life.

As it turns out, Nai Nai has terminal lung cancer, but Billi’s father’s family elects to lie to the woman about her MRI results, an action that’s evidently within the bounds of Chinese law. But as Billi’s assimilated immigrant father, Haiyan (Tzi Ma), points out to his brother, Haibin (Jiang Yongbo), during a crisis of conscience, such a thing is both frowned upon in America and prosecutable. Struggling even more with the decision, of course, is the more Americanized Billi, who can’t reconcile her Western notions of love and the sanctity of the individual with the widespread practice of lying to family members about their impending deaths.

To create a cover for a family visit to Changchun, the family forces Billi’s cousin, Hao Hao (Chen Hanwei), who lives in Japan, to marry his girlfriend, Aiko (Aoi Mizuhara). This plan provides plenty of fodder for Wang’s dry humor, as the family attempts to maintain the veneer of celebration while also bidding farewell to their ostensibly clueless matriarch, who’s confused by Hao Hao and Aiko’s lack of affection and the generally dour mood that predominates in the lead-up to the wedding. It’s potential material for a farce, but even in its funny moments, the film is contemplative rather than frenetic, preferring to hold shots as her characters gradually, often comically adjust to the reality that Nai Nai will soon be gone.

Awkwafina, hitherto notable mostly for her comic supporting roles, gives a revelatory lead performance as Billi, the thirtysomething prone to bouts of adolescent sullenness. Perhaps playing a Bushwick-based, first-generation-American creative type isn’t much of a stretch for the Queens-born rapper/actress, but she immediately brings to the role the depth of lived experience: We believe from the first frames in the long-distance love between Billi and her grandmother, and the existential crisis the young woman feels as she negotiates two cultures’ differing approaches to death and disease. In taking us to Changchun through Billi’s eyes, which are often blinking back tears as she says goodbye without articulating “goodbye,” The Farewell’s morose but not hopeless comedy taps into universal truths about the passage of time, the inevitability of loss, and how we prepare one another for it.

Review: Crawl Is Fun and Economical but Lacks Go-for-Broke Inventiveness

Review: The Lion King Remake Finds Its Place in the Circle of Consumption